My faithful Ortlieb Document Bag starting to disintegrate after years of service, keeping my mobile phones (and a few pocket cameras) dry, it was time to look for a replacement. Offering limited impact protection, I did not consider another waterproof bag, not even the new(ish) Smartphone Case, but instead had my eyes on waterproofed hard cases, in which I could securely enclose the iPhone 6. 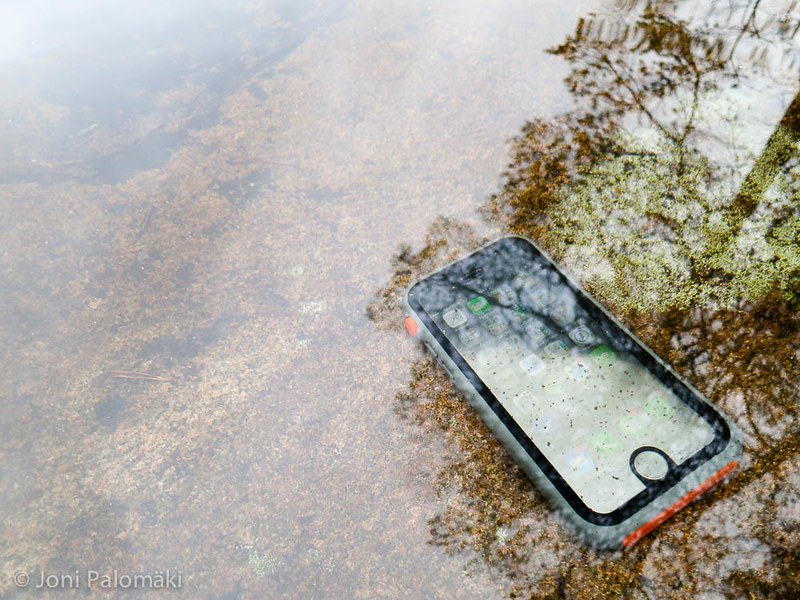 With plethora of cases to choose from, only a few ticked all the boxes, including the late LifeProof nüüd, soon to be available Lunatik Aquatik, and the early bird Catalyst, each of them with slightly different approach to secure one’s mobile phone from the elements. With an opportunity given by Catalyst and Vendora Nordic to test and review this case, about a month ago I snapped close the two halves around my phone and here’s what I have found out. 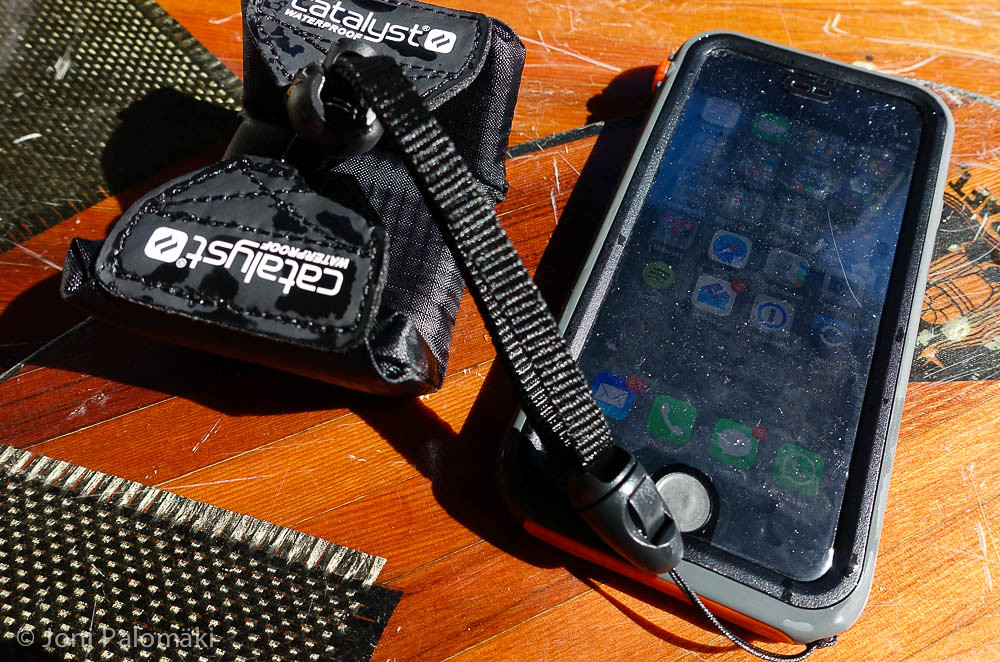 Catalyst cases have been on the market for quite a while already and the iPhone 6 version was one of the first waterproof cases to hit the market after the launch. You can find some unboxing videos and user reviews online, some also verifying the shock- and waterproofness, rated (and tested) MIL-SPEC 810G for drops and IP68 for waterproofness (liquid and particles actually) by the manufacturer. Some have even put it inside a dish washer, finding no leakages. 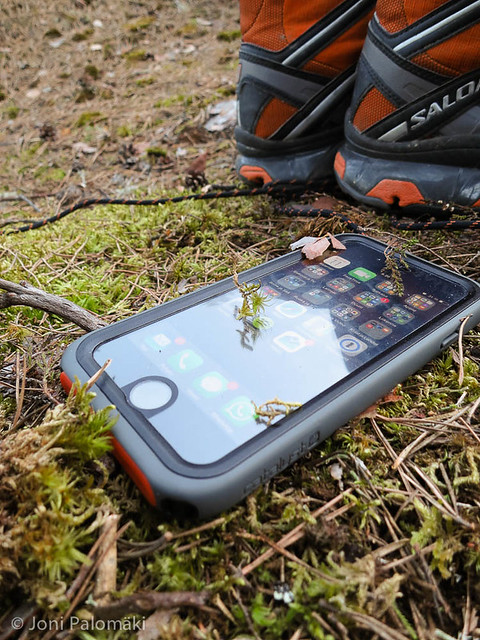 During the month I have used the signal orange -detailed Rescue Ranger, it has gone through a wringer. Used daily to protect my iPhone both in the extreme office environment and in the great outdoors, cycling, hiking and paddling with it, it has proven itself as a trustworthy companion. I have knocked it around, dropped it and gotten it wet repetitively and not once have I had the case failing. Hitting a hard surface case hasn’t popped open and the silicone latch on the bottom of the case has proved to be a simple yet very effective way of keeping the insides dry, while allowing easy access to the Lightning and headphone ports. As for compatibility, the headphone port, 6 mm in diameter, should take most of the aftermarket headphones with ease, as long as it comes with a straight jack, including the Beoplay H6’s I use daily. For waterproofed connection, or very thick or L-shaped jacks, Catalyst offers an Audio Adapter. 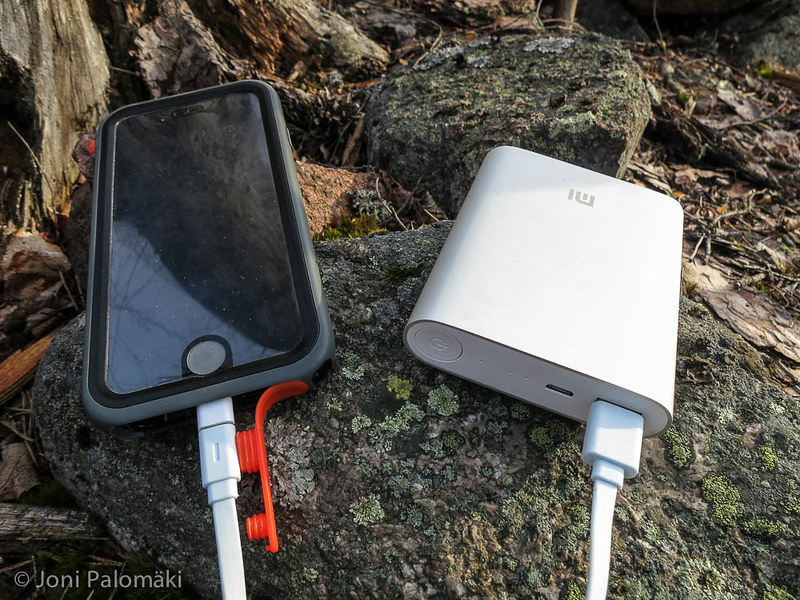 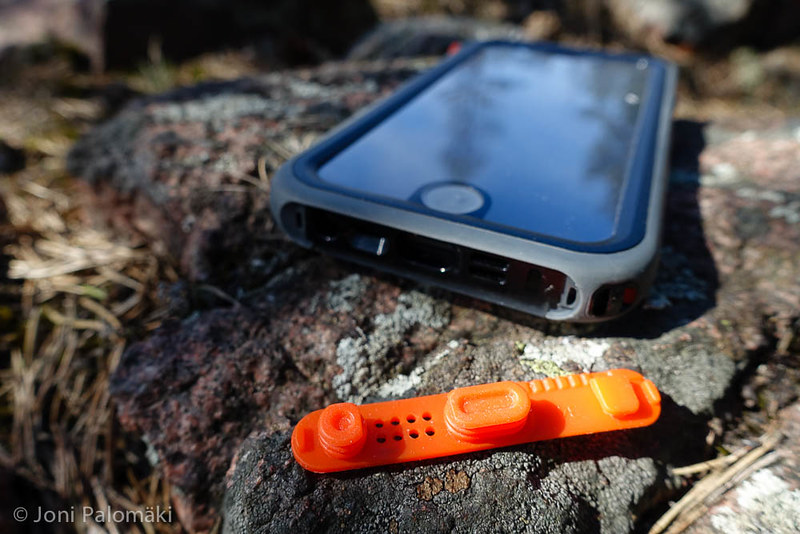 The rubbery outside rim of the case can take a lot of abuse, showing so far no signs of use. The transparent front and back however do have some abrasions in them, though not really noticeable in normal use, except for one recent streak across the front screen. 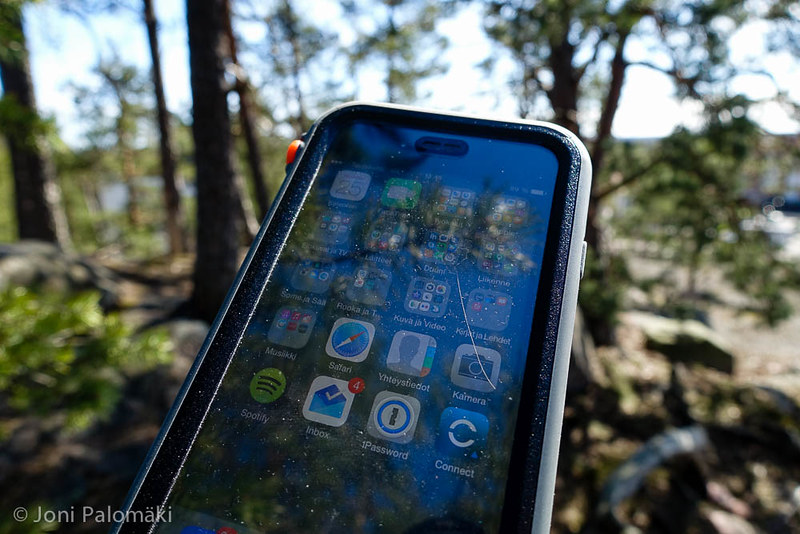 I stuff the case carelessly into the frame bag, backpacks and pockets with tools, keys and whatnot already in them, and typically shove it on whatever surface is at hand. Therefore for me superficial scuffs are expected, just proving the case is worth having. 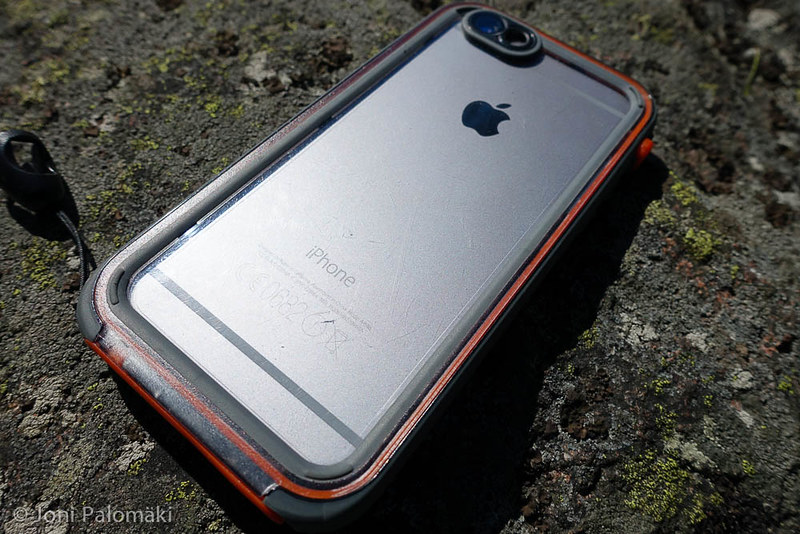 I have been taking out phone from the case regularly, to inspect possible structural failures and wear and tear as part of testing, and have found the locking mechanism of the two halves to be robust enough for repetitive assembly and disassemply, always snapping close securely. Volume and lock buttons are snug and require a bit of force to actuate, while still comfortable to use, and the rotating crown dial is an ingenious solution to operate the mute switch on the iPhone. Only if it would come with a small marking to indicate the current position of the dial - phone is muted by turning clockwise/down. 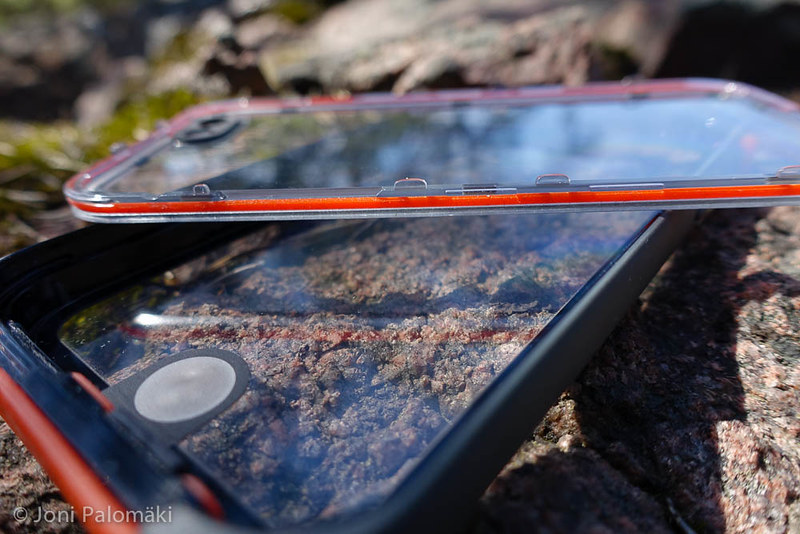 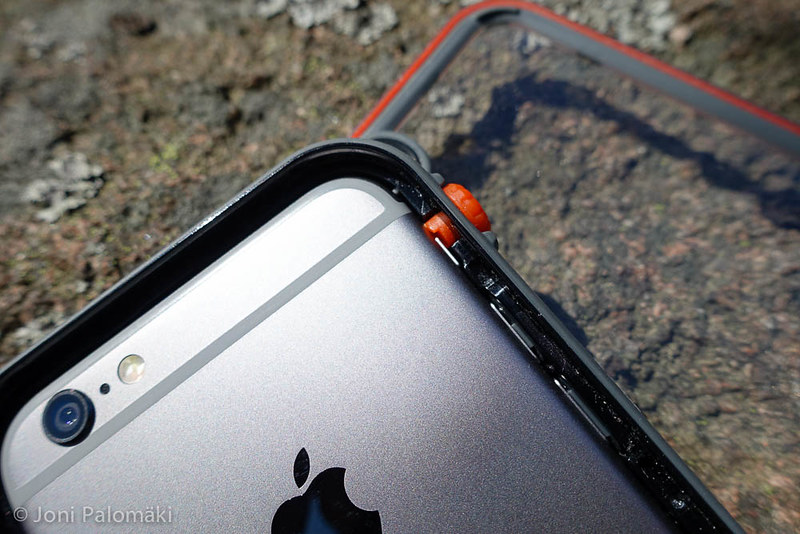 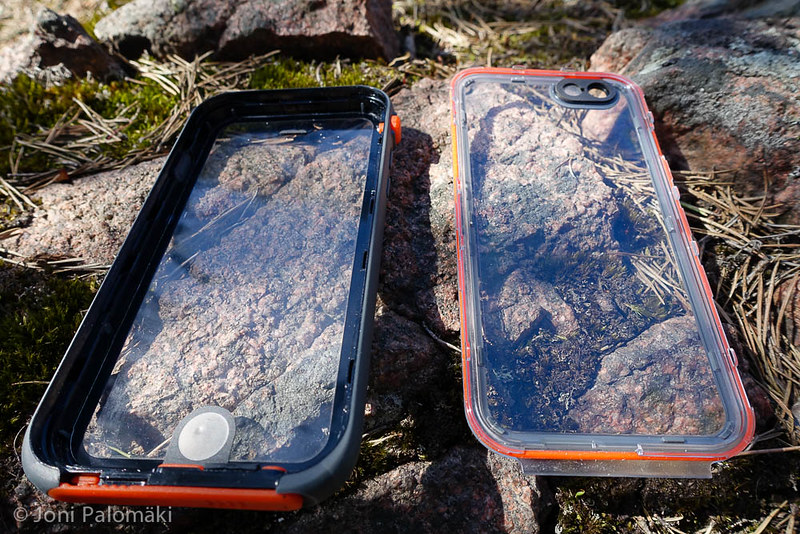 As a heavy user of Touch ID, not only because of the great 1Password app, being able to use it even with a case is a necessity. With Catalyst, the home button is covered with a soft membrane that allows fingerprint biometric scan, which I have found to be working perfectly. You might notice a small bump in this membrane in the pictures, and that is because while unboxing the case with my daughter (who would now very much like to have the Green Pop version for her 4S), she curiously pressed her finger into the membrane asking what it was - and the membrane, not failing, stretched out a bit. Hardly a defect, it neither has any impact whatsoever to the function of the membrane and the Touch ID, as explained above. 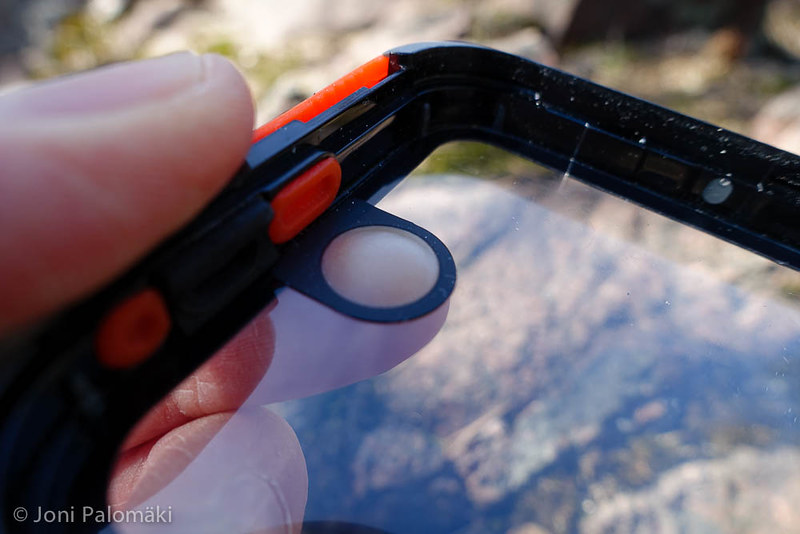 For my typical photo- and videography with iPhone, the case performs flawlessly, hard coated lens having no noticeable impact on the picture quality. This is with few inevitable scuffs on the lens, as it is not recessed on the back of the case. Pixel peeping you might see a slight shift in softness in the images, but you would be hard pressed to notice it in normal circumstances. 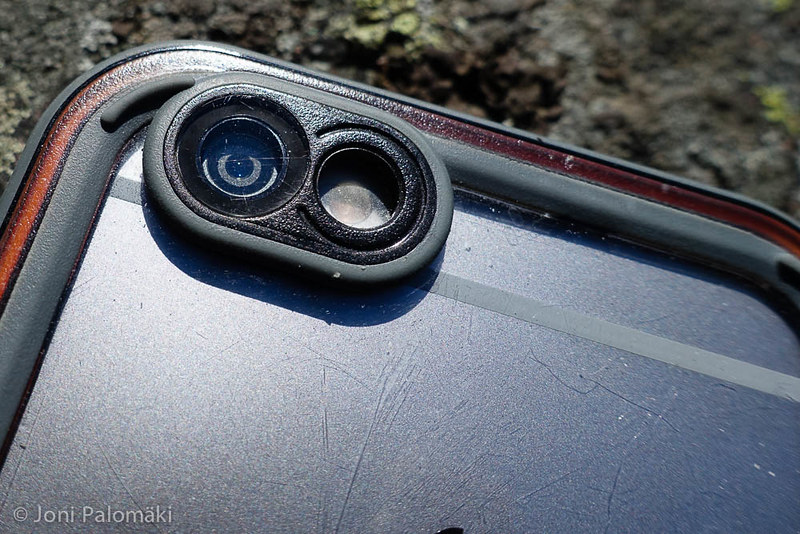 Any phone case, regardless of the level of protection it provides, needs to function without interfering with the usability of the phone. Mechanics aside, Catalyst fares well also in regards to sound quality, as the membranes covering the speakers and the microphone do a great job in passing the sound through. Not once have I had to raise my voice or someone on the line complaining about my voice being muffled, something that has apparently being plaguing for example the new LifeProof nüüd. 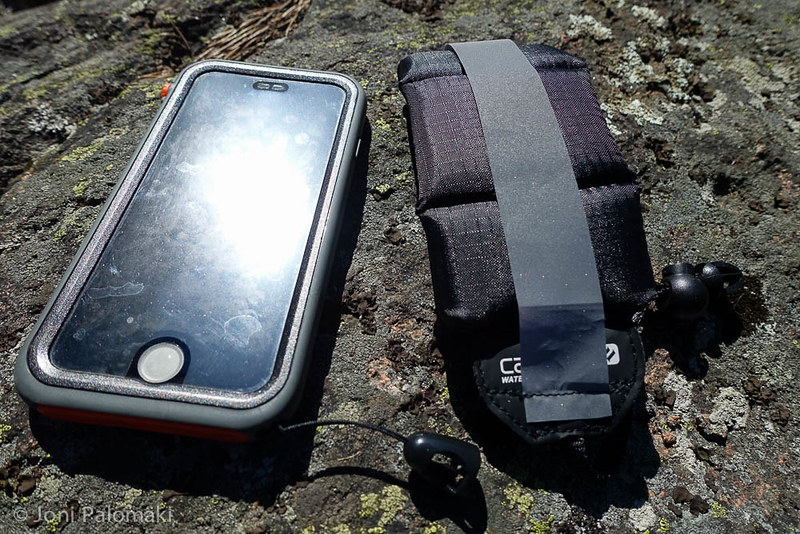 Having sunk some electronics in the past, for example one GoPro due to sudden failure of a GorillaPod, I’ve learned waterproofness means nothing if you can’t retrieve the device from the bottom of the river. Hence I also opted for the Floating Lanyard that I hoped to keep my phone from ending on that sunk-in-action list. A simple, easy to connect accessory, it has enough buoyancy to keep anything up to 250 grams heavy afloat, and comes with a slider to secure it around your wrist if needed. I typically place the phone on the packraft deck, locked down from the lanyard with a carabiner. I would have liked Catalyst to use some sort of brightly colored fabric instead of black that all too easily blends into the murky waters, especially in the dark. Opening the packrafting season a week ago on a nearby flooding river, paddling towards the sunset, I sewed a strip of reflective fabric on it, to be able to spot it easier (with or without a headlamp) against a dark background, if dropped. While all-black is aesthetically a better choice, adding some color would be a reasonable trade-off for improved visibility. 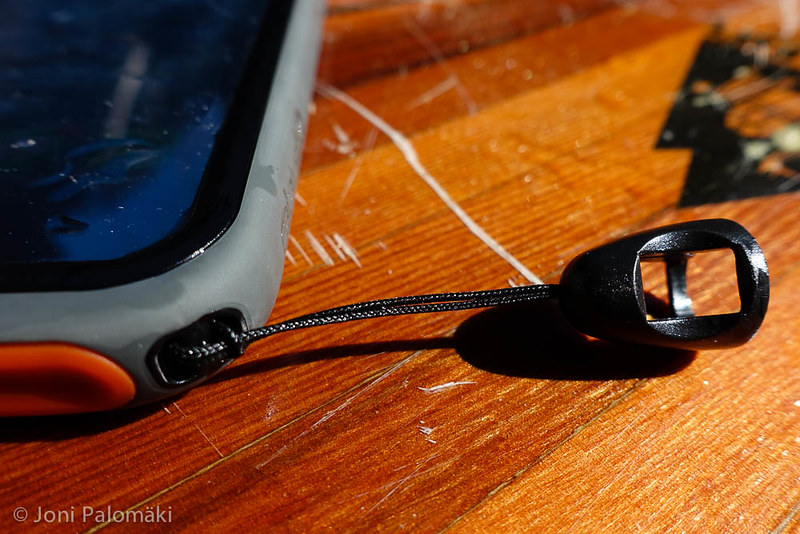 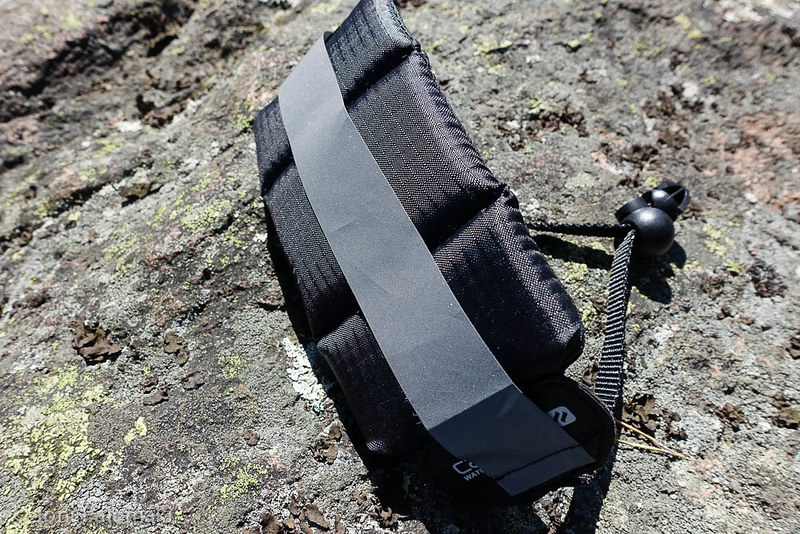 Based on my experience with the case, I can highly recommend it as a lightweight and low bulk, yet robust protection for your phone, keeping it safe from the elements on your adventures. Several color schemes to choose from and a range of add-on accessories and spare parts should cover all your needs and preferences. Purchase the case directly from catalystlifestyle.com, or if you reside in Europe, I can also recommend lifestylestore.se, with flat rate shipping for 9.99 EUR only, within EU.

Disclaimer: At the time of reviewing this product, I had no affiliation with Catalyst, and receiving the product free of charge for testing had no influence on the content, or my opinions about this particular product. In May 2015, I became an ambassador for Catalyst.