Since I’ve focused recently more on sailing with the packraft (some of which has also been caught on video, such as the trip to Suomenlinna embedded below), rather than paddling long distances with it, the traditional autumn trip with a group of friends came in handy.

As we are typically a mixed group on different types of vessels, choosing a destination is not always that straightforward. Having a full weekend to spend, Konnevesi, and the white water route especially, caught my attention, and soon we had a destination and a rough plan set. The route we chose, known as Konneveden Koskireitti, follows a series of seven rapids, down from Siikakoski to Hannulankoski, over a distance of roughly 20 kilometers, crossing couple of larger bodies of water down the line. 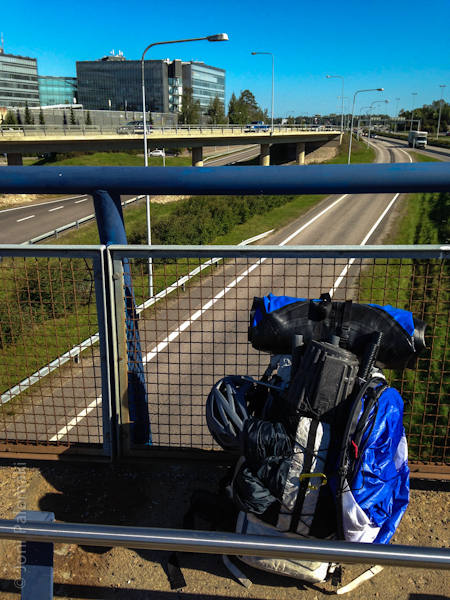 Traveling by car, we arrived to our starting point at Siikakoski on Friday evening, after dark, and enjoyed the fully-serviced lean-to next to the Siikakoski bridge while watching the last of the fly fishermen wrap up for the day. The route being a popular fishing destination (at Siikakoski there’s a fish farm, right across the chute used by paddlers to avoid the rocky white water), there are good instructions for each of the rapids from that viewpoint, and permits can be bought locally. I had hoped to perhaps get a chance to try and catch some trout, but unfortunately all the permits were sold out well in advance for Friday and Saturday (there is very limited amount sold per day). 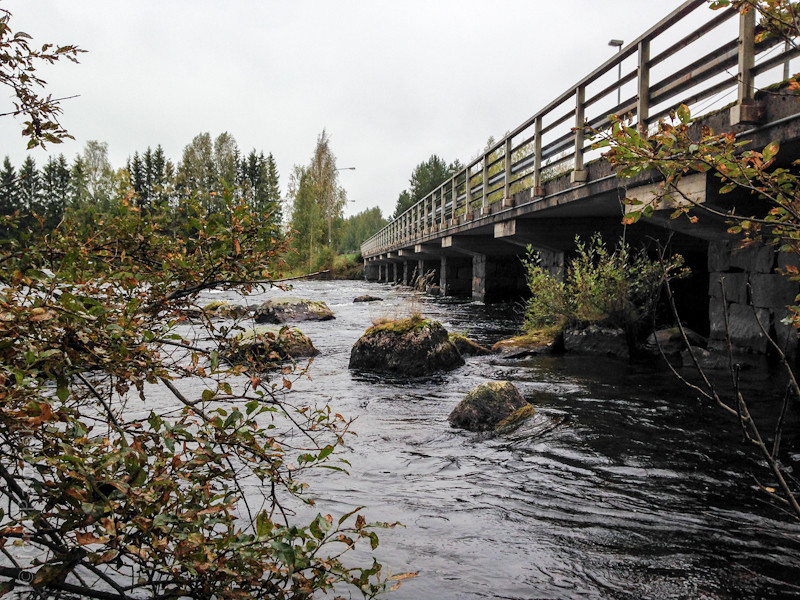 Popular turnaround point for kids with mopeds and teenagers with cars, there was some traffic along the evening which luckily quieted down for the night, leaving just the roar of the water rushing past our campsite to lull us to sleep. In the morning we arranged our gear, moved one car to the planned end point, some 30 kilometers away, and off we were. While the rest of the group, using a kayak, a somewhat delicate kevlar canoe, and a robust double canoe, chose the chute to start with (a fast flowing channel that avoids the rapid altogether), I took my chances with packraft on the rocky and shallow Siikakoski rapid, running it down without much hassle or ground contact, finishing with a slide between the pillars under the bridge. 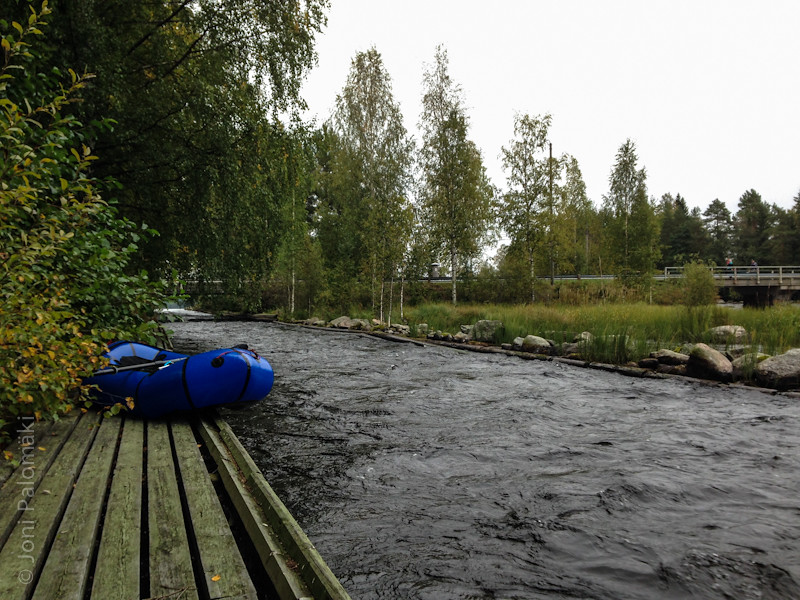 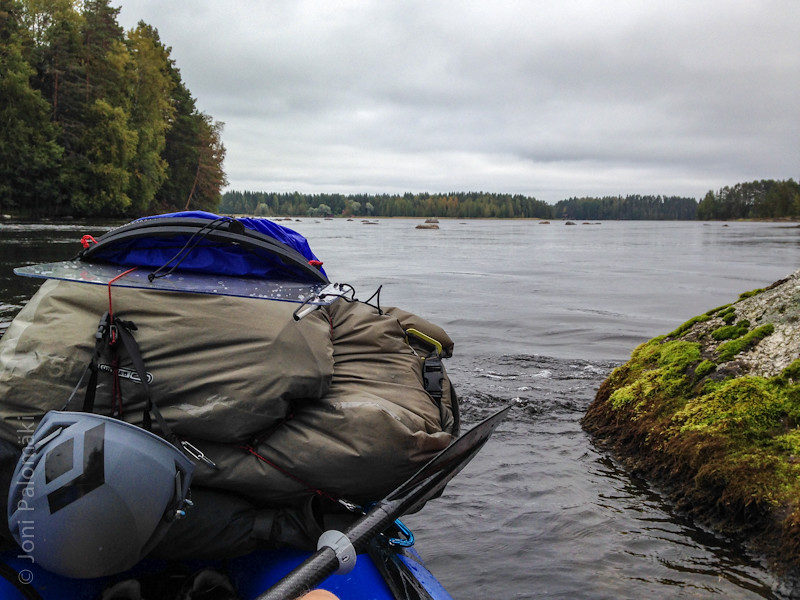 Next rapid down the line was Taikinainen, which was basically a “sahi” (no translation available, but it means a fast flowing section of a river that just doesn’t categorize as a rapid) at the current water levels, and we continued towards Karinkoski, which is nice and easy rapid, and which all of us were happy to paddle through. With this group I usually I tend to take the lead and scout the route for others, as it’s easier with the packraft and hitting a big rock or two wouldn’t lead to a capsize, as could happen with a kayak or a canoe. The rapids down this route were all rocky (specifically made like that for the fish), which also kept it interesting for us. 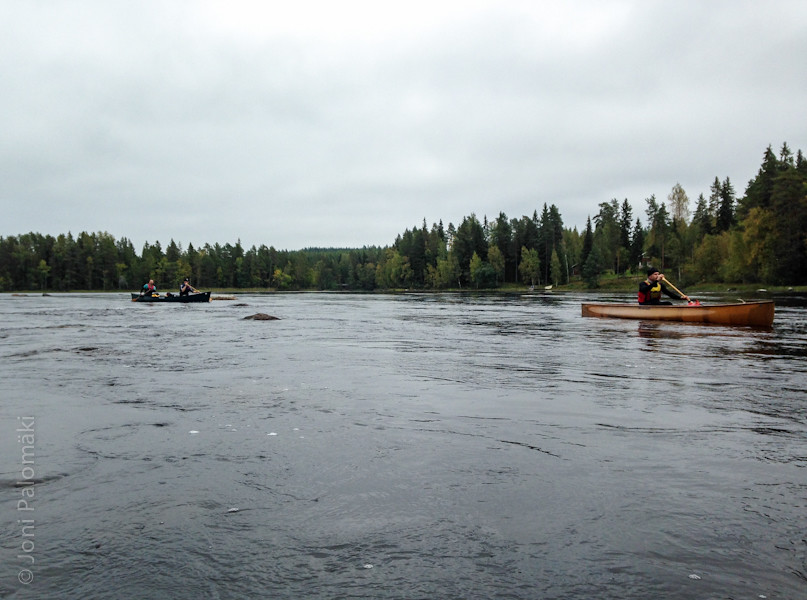 The fourth rapid, Kellankoski, is the largest of the seven, and one that comes with a note of warning. Kellankoski starts with a half-circle shaped drop (or a slide), and then runs down with rocks and large boulders to negotiate. What makes it potentially dangerous for the unprepared is that the obvious line down the drop pulls you straight into big rocks, so you need to be ready (and able) to maneuver around them. After the first 100 meters the rapid calms down a bit, but continues up to half a kilometer more as a nice rock garden with good flow. 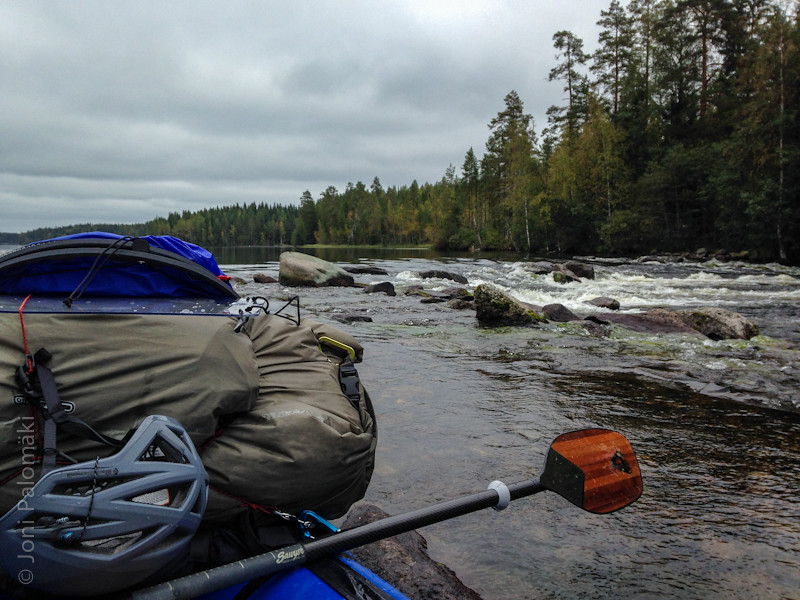 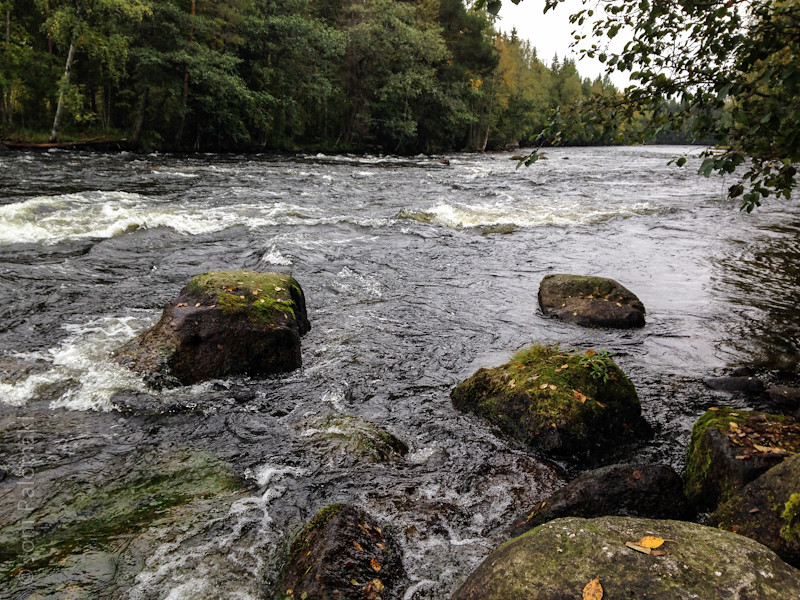 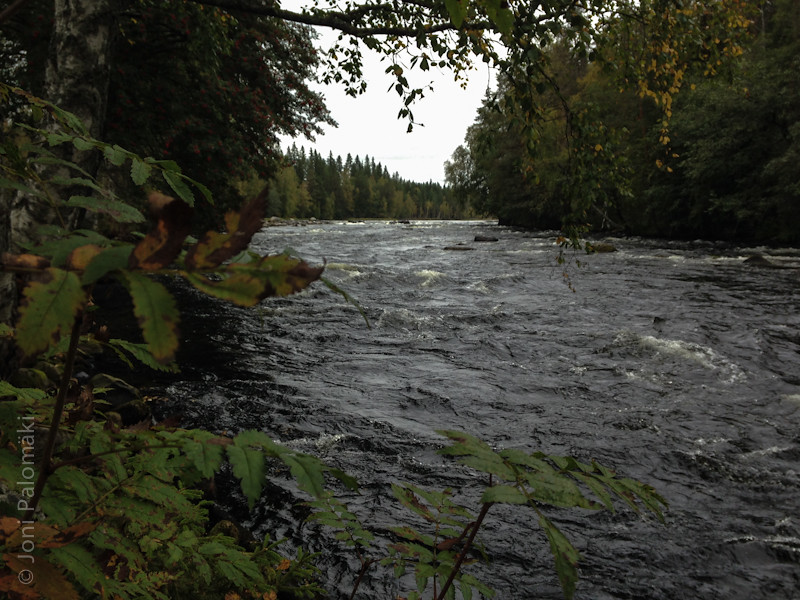 Upon inspection we ran it with Mikko (who had a kayak), both choosing a bit different line down the drop. Taking the last look before dropping in, and turning away, I got pulled in to the current (which is very strong few meters above the neck of the drop), backwards, which made an interesting start, but with a packraft a quick 180 degree turn into the first big wave simply made a splash, and I was again back on track, enjoying the ride down the rapid. 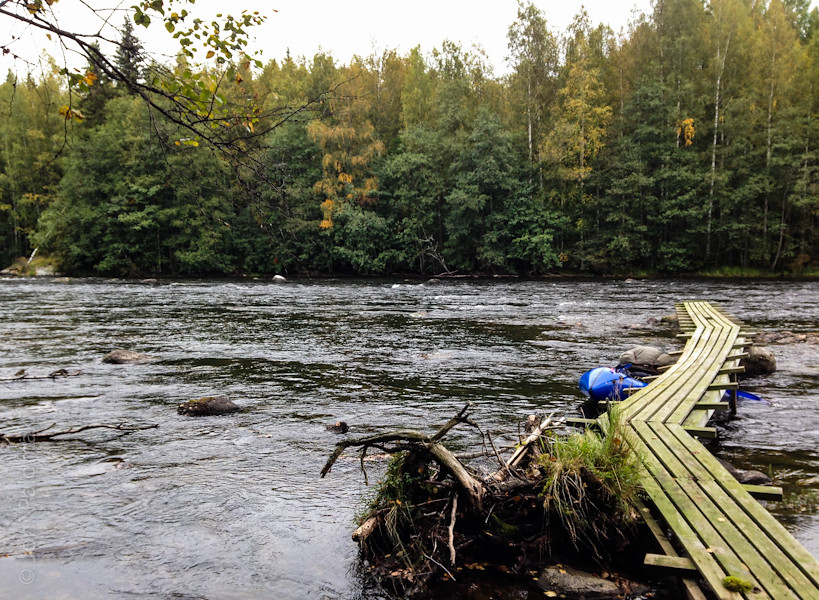 We hiked around the Kellankoski with Mikko while waiting for the others to portage the canoes before we could continue together. Passing Yläinen next was simple, as that is also an easy and straigtforward rapid (while still shallow and rocky). 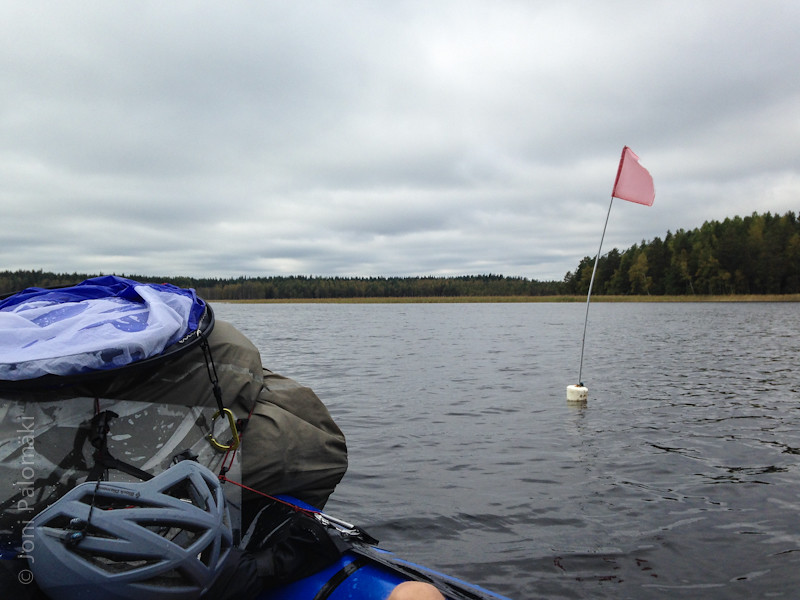 Knowing there would be lakes to cross, and wide sections of river with no flow to propel the slow (in comparison to my company) packraft, I had brought the sail and the keel with me, despite the forecast that had showed not much hope to power myself with wind. As it happened, the forecast was accurate, and while there was basically no wind to speak off, the little of it was all more or less headwind. Only when we stopped mid Liesvesi crossing for lunch, I could find an angle to sail a whopping 100 meters with a keel and fully tilted sail, at half of the normal paddling speed… But no harm done, carrying the sail just in case was still worth it, as the extra load was negligible - better luck next time! 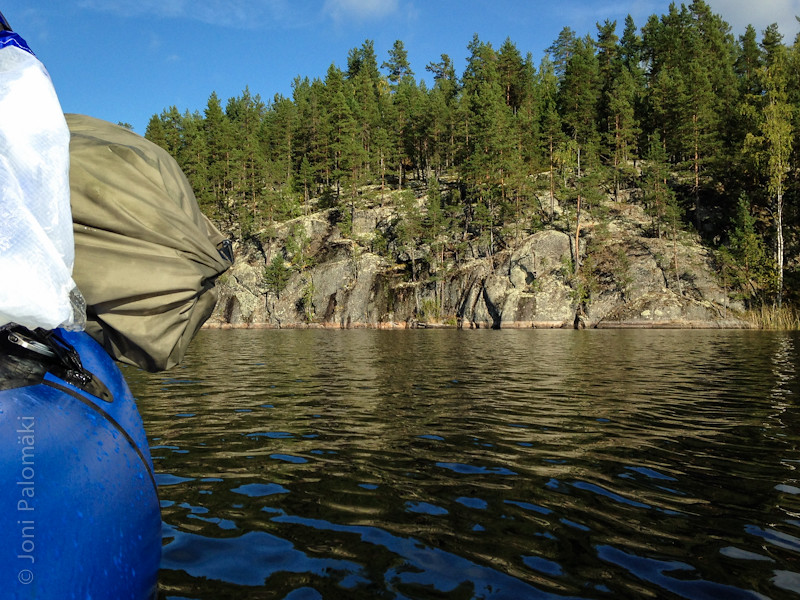 Entering the rapid number six, Keskisenkoski, was preceded with a hop in between two bodies of water at Vanginvesi, with a short portage of few tens of meters only. 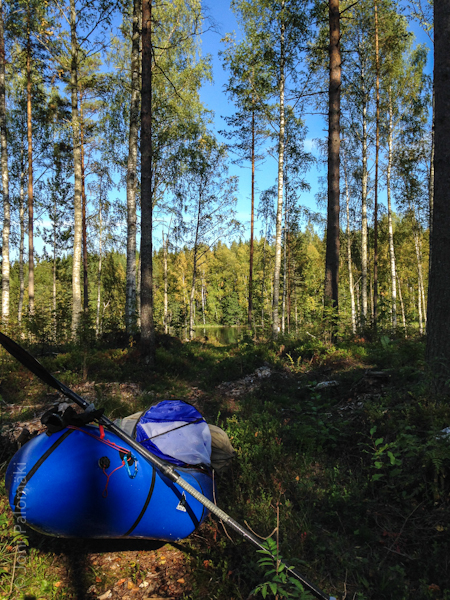 Keskisenkoski is relatively small and straigthforward rapid, but again being shallow presents some opportunities to get up close and personal with rocks. It was here where we probably had the closest call for tipping a canoe over. It got momentarily stuck on a rock, turned sideways and around in the current. Escaping with careful backwards meneuvering with just a few scratches on the laquered surface, journey continued merrily. 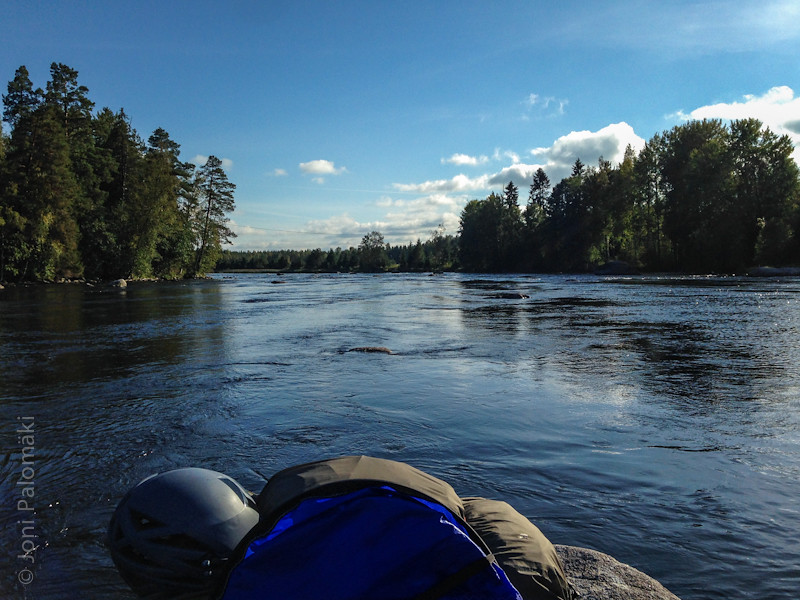 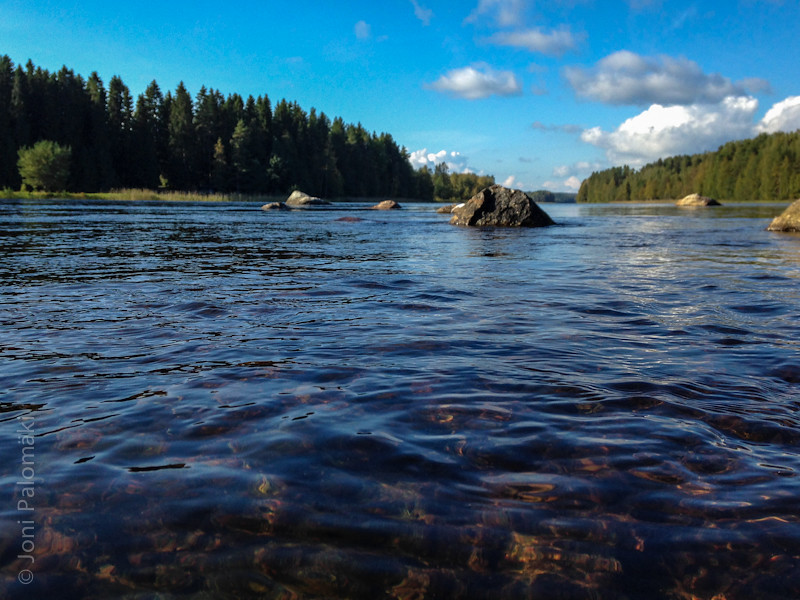 To finish the day, we entered Hannulankoski, which required some scouting down the stream. Hopping off and climbing on a rock on the side I could scout the best line, and none of us had no problems completing this last rapid down the route. Only a kilometer away, we paddled on to the Akkasilta campsite, where we had planned to stay for the night. A refreshing swim for some and a dinner for all, we enjoyed the evening around a fire. 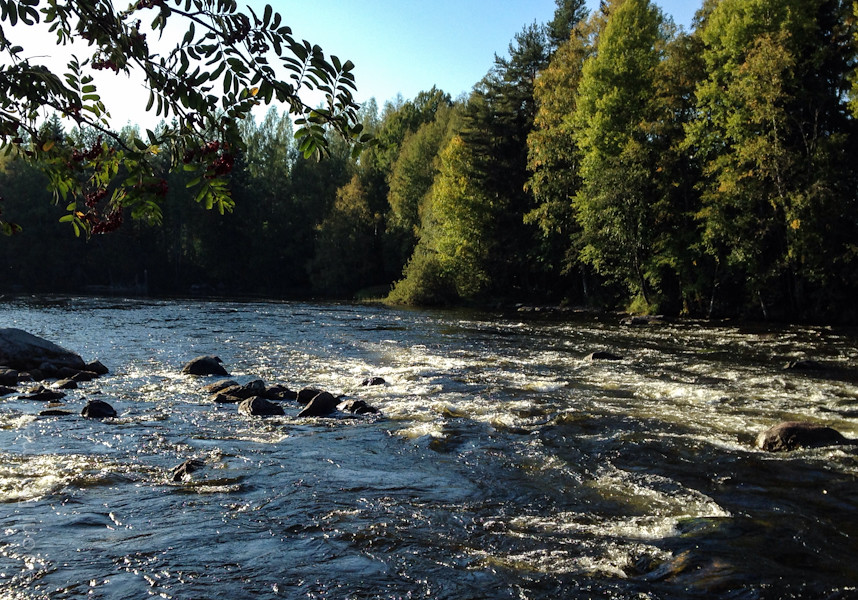 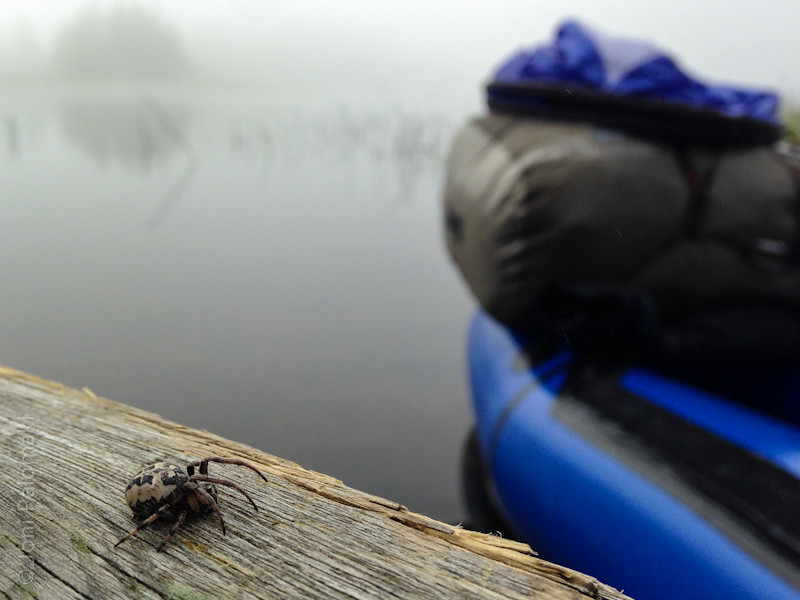 We woke up on a wet ground with mist over the water, signs of autumn starting to take over while the warmth of the sun and hence the temperature were summer-alike through the whole weekend. Taking our time, we eventually got moving and continued south, towards the end of our journey, some 6 kilometers away. The paddle was across a lake so no moving water to spice things up - fog, saggy clouds and finally the full blown sunshine supplied the awe for this final leg instead. 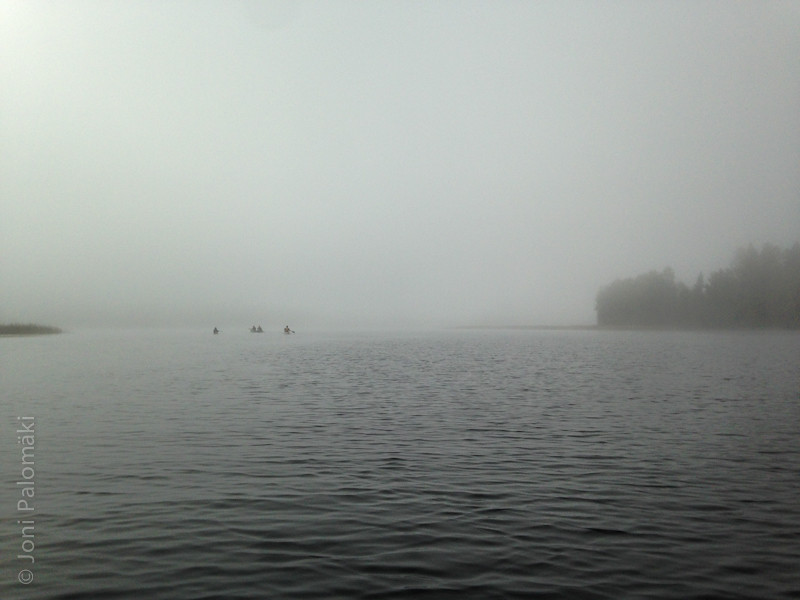 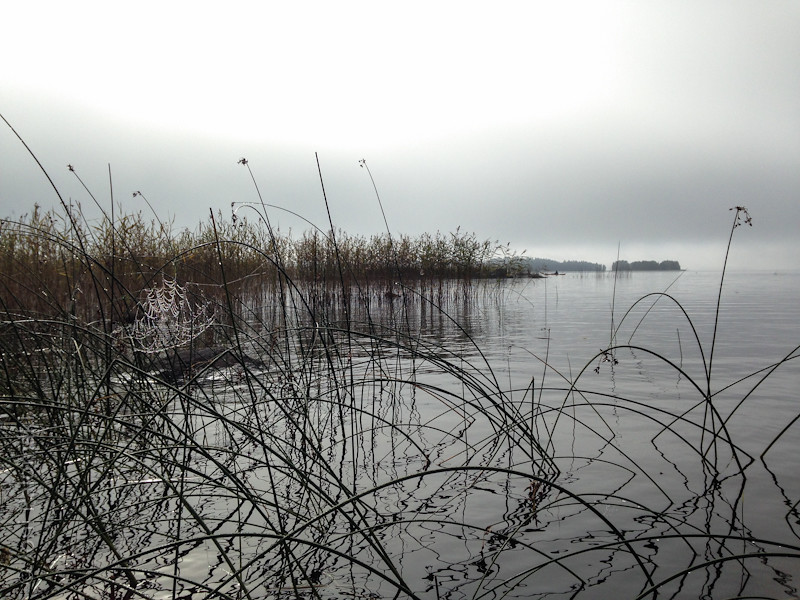 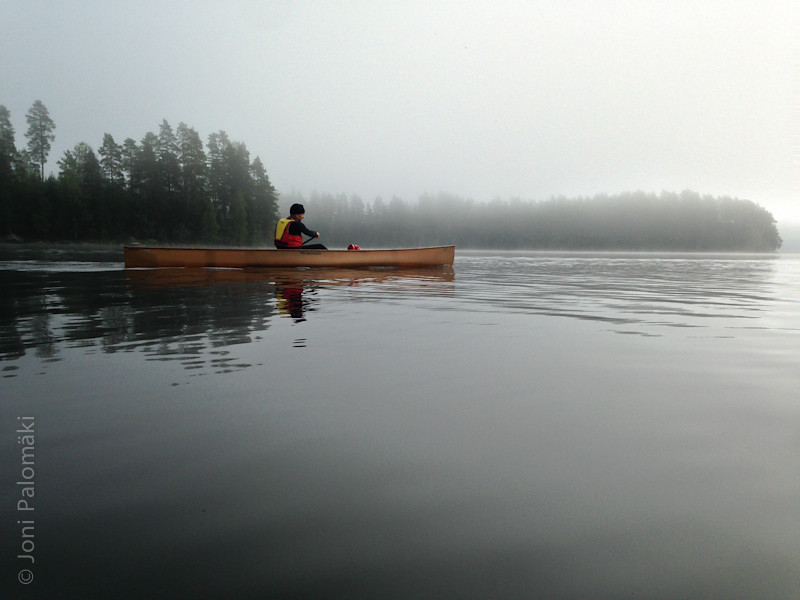 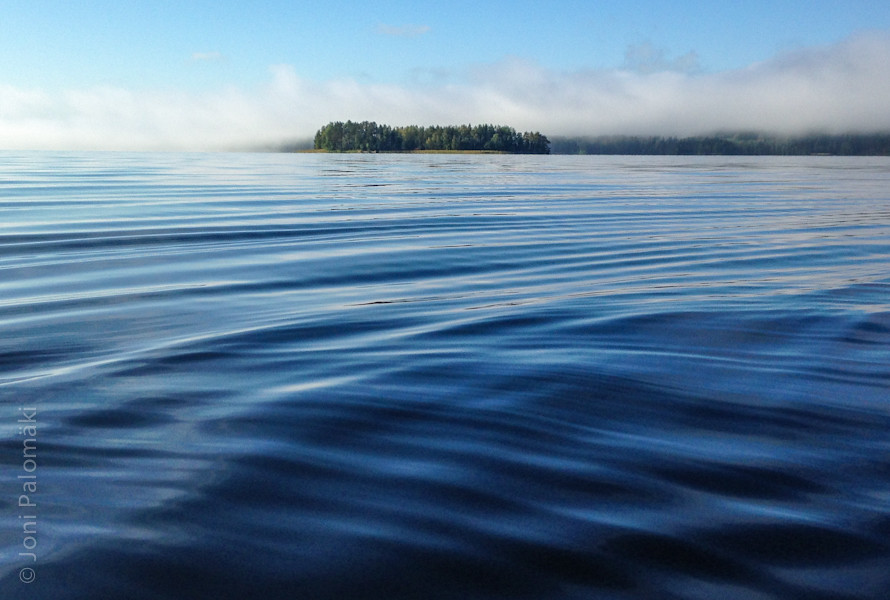 Based on this weekend I can warmly recommend this particular route, regardless of the vessel you have. Where we stopped for the night marks the end of the white water on the route, but the marked route continues much futher, in total of roughly 65 kilometers (measured from Siikakoski). As the rest of the route is more open, and across lakes mostly, I would not find it interesting enough for a packraft - except with some tailwind and a sail! Overall the route met the expectations, and for example the extremely clear waters all the way to Akkasilta was nice (and we drank it as well, thanks to the Sawyer Mini’s). 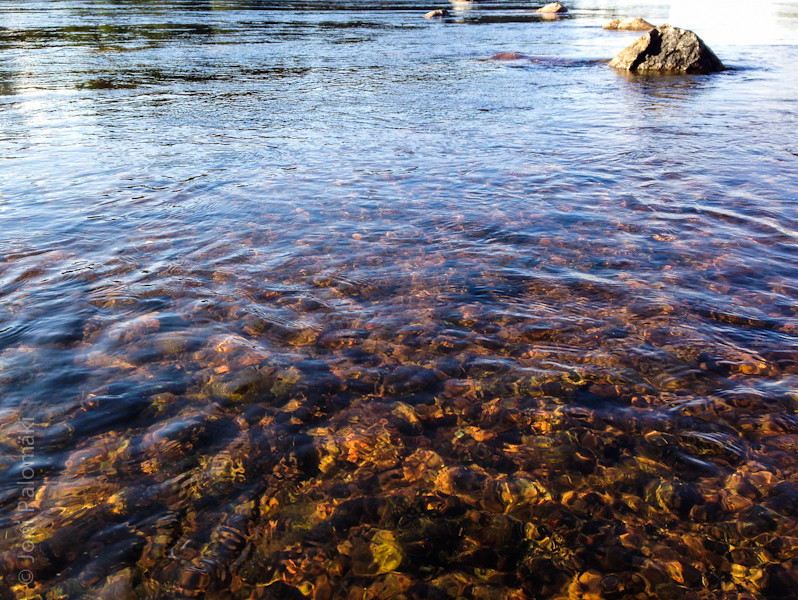