Having done my fair share of paddling on the sea with the packraft, a vessel more well suited for moving water and small lakes and ponds, it was time to try something new. Some time ago, snaking around on the borderline of Espoo and Helsinki with Marko, we built a make-do catamaran out of our two rafts and a tarp, to sail between the islands for relatively short distances, and had a blast. A hassle to setup and awkward to sail, it still gave us a spark that had to be dealt with, and after a quick run through of commercially available options, we settled for a pair of WindPaddle Cruisers, already proven especially for use with canoes and kayaks. 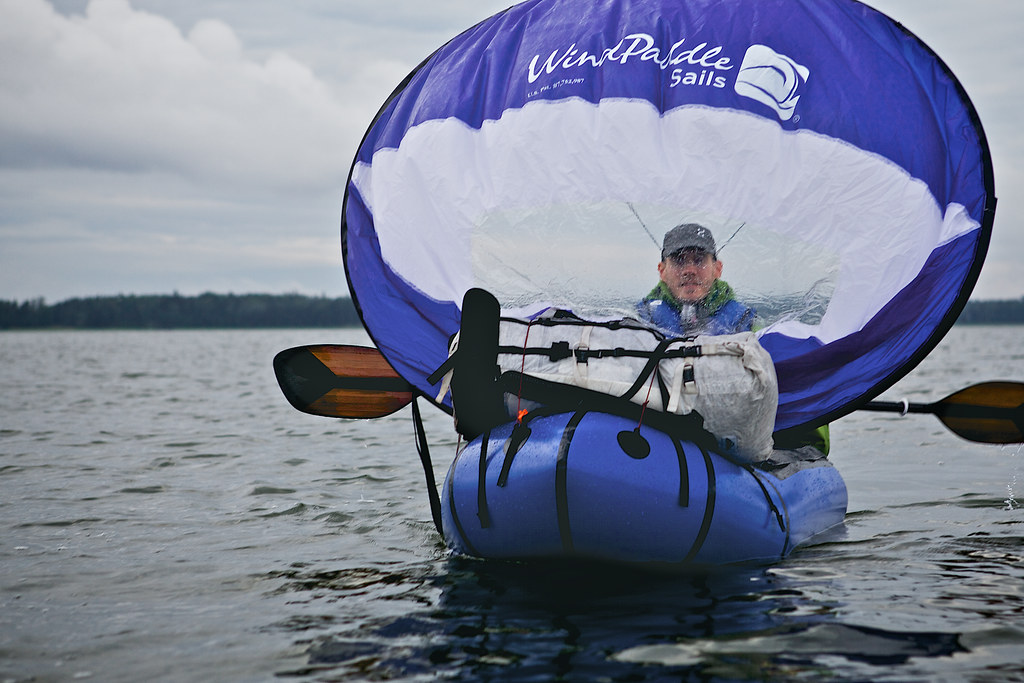 We got the sails last Friday, and with Marko about to finish his week outdoors, and a forecast of brisk wind for Saturday, we headed out on Friday evening, taking aim to Pentala island some 6 kilometers from our starting point at Klobben, to try the sails a bit before camping out and hopefully catching some good northerly wind the next day. 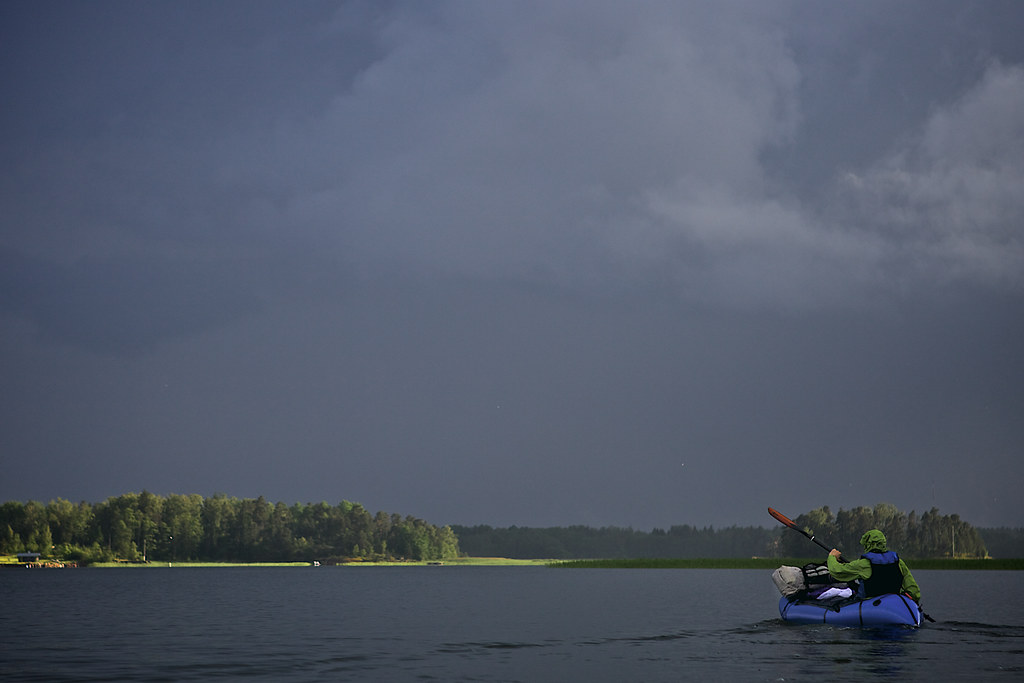 Approach to Pentala started with paddling out in pouring rain, with no wind to speak off. As the rain receded, wind picked up just a bit, and we got an opportunity to pop out the sails for the first time. Attached to bow’s aftermost grab loops, stowed against the backpack, the sail spun open with a light tug, taking it’s shape in an instant. With a very slight breeze, we were struggling to keep the sail up and rafts in motion, and we made all sorts of errors while learning the required maneuvers - managing to sink the sail under the raft was probably the worst (not an issue with longer vessels like canoes and kayaks, but flipping the sail forward (while letting go of the sheets) while in forward motion can easily do this).

Learning the required maneuvers, we made way to our destination at Pentala, setting up a camp late in the evening. Friday the 13th was done with a full moon peeping between the clouds, prior to a heavy shower that drummed us to sleep. Half awake few times during the night I could hear the swish of leaves intensify as the wind started to pick up speed, as forecasted. 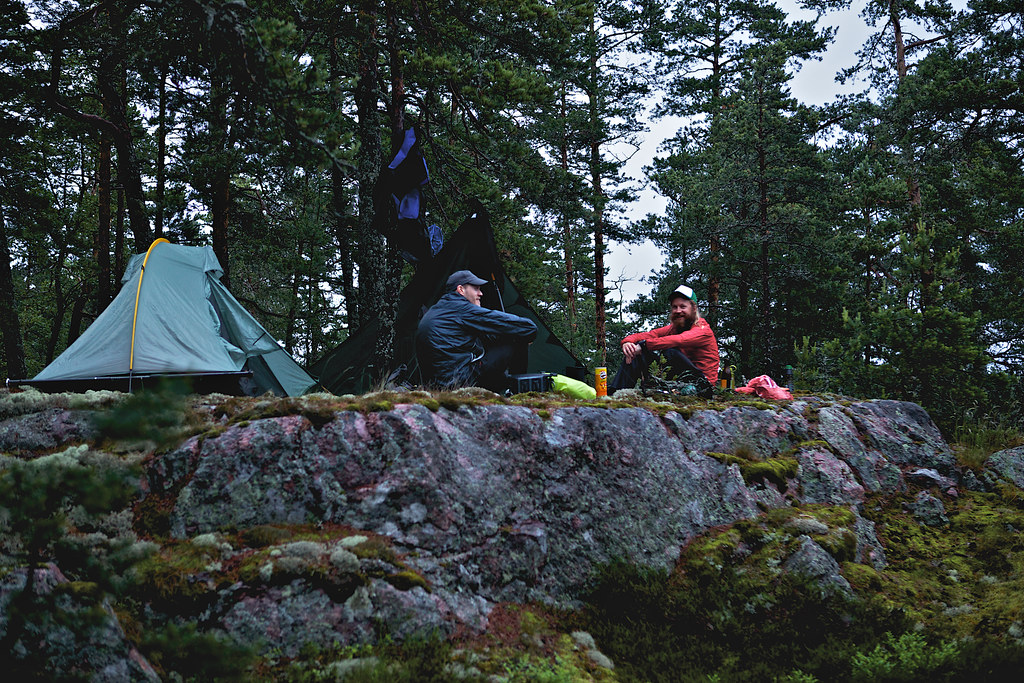 Morning found us in shivers both because of the wind chill and the excitement from looking down at sea and the white capped swell, wind on our backs - forecast had promised northerly winds from anywhere around 7 m/s to 10 m/s or more, and it seemed to hold. Out in the sea we felt the increased power instantly, our rafts gaining speed and the controlled steering with the paddle-rudder became more vital than the previous day. We took bearing towards Östergadden, a small cluster of islands and islets occupied by nesting colonies of great black cormorants (and seagulls). Enjoying the increasing wind and swell, feeling our new rigs, we were learning to maneuver them. We sailed mostly crosswind at varying angles and directions, prevailing wind being northerly and our way leading southwest. 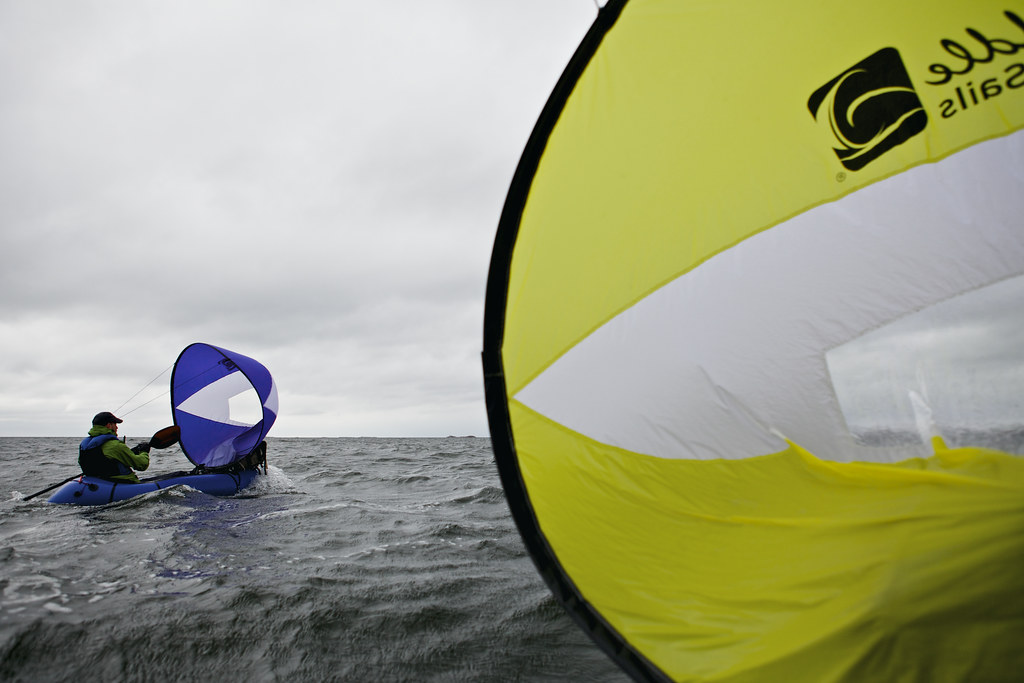 The islands occupied by the cormorants is a sighting on its own - and if you would arrive upwind, the thick reek of feces would reach you way before sighting of the islands. Due to massive amount of bird excrements, and the resulting high concentration of nitrogen and phosphorus literally kills majority of flora, including any trees. 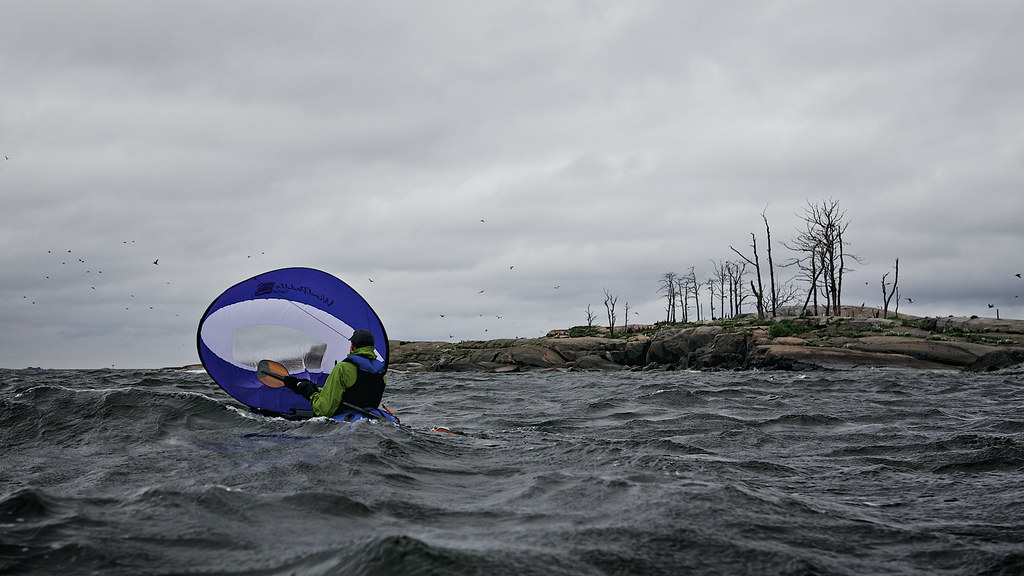 Passing west from these islands we were at furthermost from the mainland, and strong wind was raising quite high swell (perhaps a meter or so) and around this area we had some close calls of capsizing, as riptide and gusty wind made us pay fast for any errors while maneuvering the rafts - for that reason we could not document the roughest sections on camera, it would have required a fixed rig of some sort, or an extra pair of hands.

Following the coastline we reached our first checkpoint, and having made good progress, decided to continue all the way to the Porkkalanniemi from where we could arrange a pickup later. Regular route decisions based on the prevailing wind and roughness of the sea against our skills and commitment kept it interesting and time flew by. We pushed the rafts and the sails to the limit, finding what is possible, and getting more and more comfortable in maneuvering them in varying conditions. 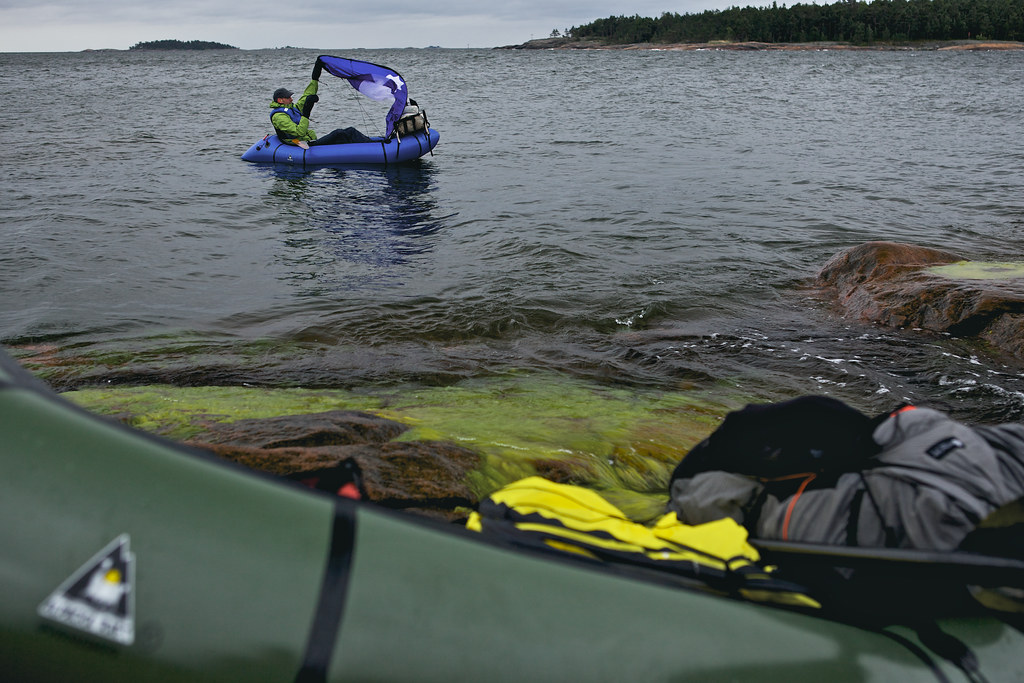 At one time, closer to the end of our journey, we had a small rescue operation due to a dropped paddle. Neither of use had any leashes for the paddles, as it simply had not occurred to us that one would be needed (dropping a paddle while using it to advance by paddling is difficult - but using it as a rudder with one hand, not so difficult). Having just had his cap blown away in thr wind, Marko, fiddling with the sail, lost a hold of the paddle just for a second, dropped it and half a second later it was already out reach and departing fast. I was a bit ahead, unaware of this, but there was an island close by and by pulling down the sail and hand paddling Marko managed to get the drifting raft safely on the shore, and called me for help. I pulled the sail down as well, and paddled back up crosswind to the island, to lend my paddle for immediate retrieval before the runaway would drift too far downwind.

With two of us, dropping the paddle was less of a hazard, though still not something to take lightly, but obviously alone it would have meant jumping to the sea at an instant, trying to retrieve the paddle while holding on to the raft somehow, swimming in the churning sea, and then returning safely inside the raft (something that I’ve been practicing in calm water already, but even then wet entry is not a trivial exercise). Lesson learned, wear a leash of some sort when packsailing! 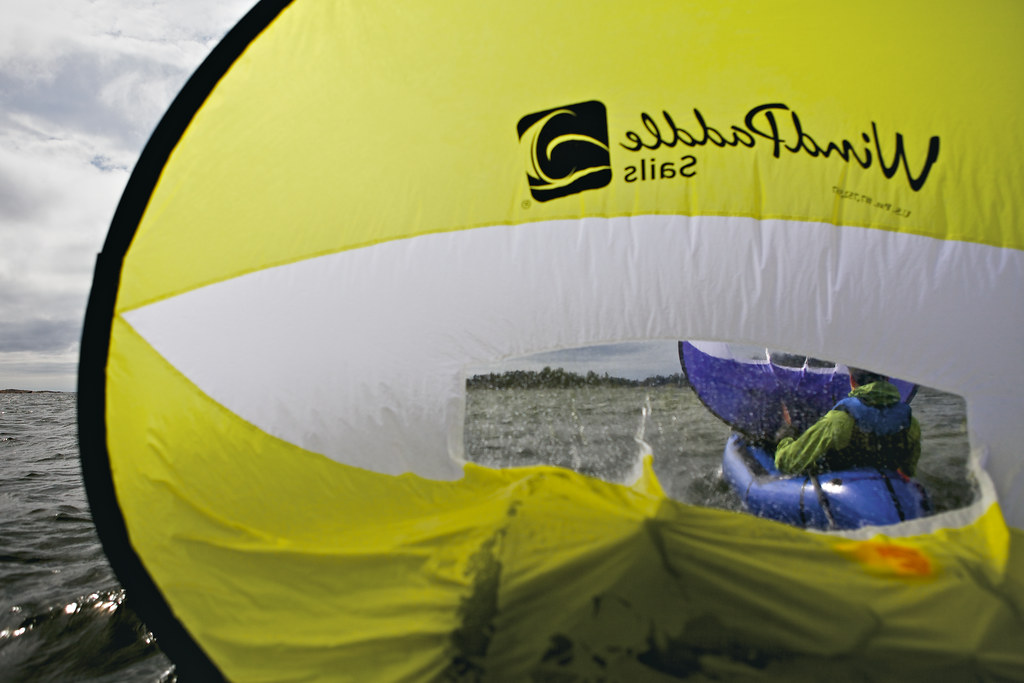 Remaining leg was a couple of kilometers and passing through a nice channel barely two packrafts wide, we reached Porkkala in due time, for our ride back home, now with sun coming out finally. Distance covered during the day (from Pentala) was roughly 21 kilometers, while reaching a maximum speed of 4.3 knots (8 km/h). Despite the rough gusty wind and our learning curve, the sails performed without any issues. We held the sheet (control line) behind the back of our heads at all times, and while that might not seem like a good way in strong gusty winds, it is the most convenient especially with packrafts (no rudder to control without hands, like in kayaks), and we had no trouble during or afterwards (no neck pain of any sort - those muscles are pretty strong). We’re planning to add a cord lock to the sheet, to easily shorten or lengthen it to trim the sail. WindPaddle allows rotation to a certain angle by loosening the deck attachment straps - since we had the backpacks in front of the sails, we did not use this, but rather pulled from the sheet to draw a corner of a sail in, resulting to a similar (but not quite the same, as we found out on the second trip this week) trim. 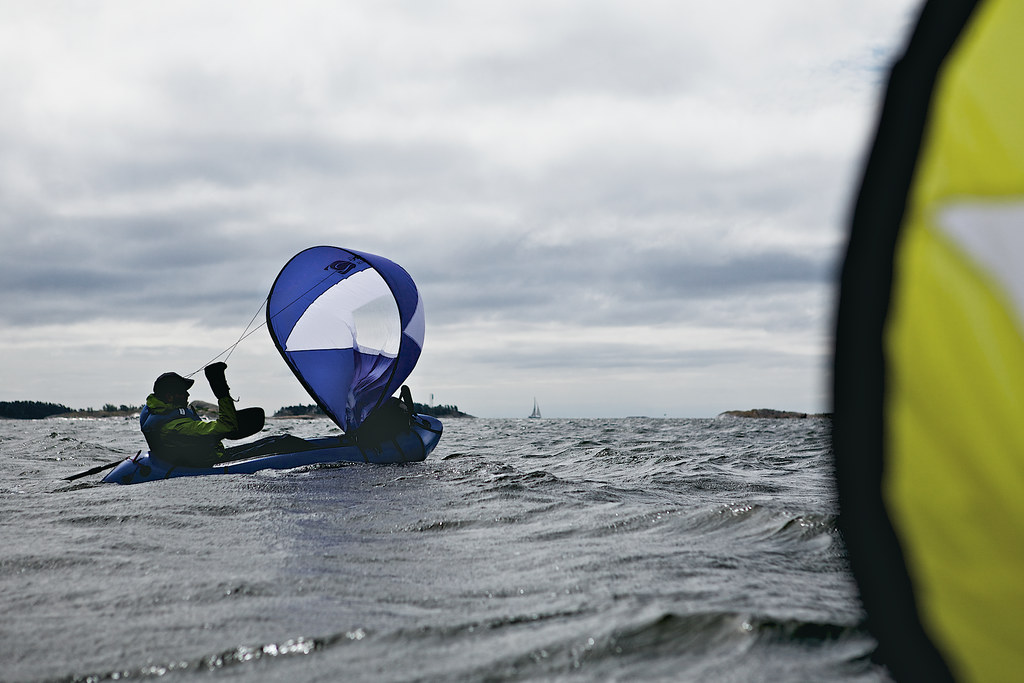 Summarizing, if it was not already obvious, we had a blast and looking forward to all new possibilities this opens up. Having the Baltic Sea on our doorstep, and plenty of big lakes all around Finland, the possibilities are virtually endless. With the Cruiser sail, a loaded packraft starts moving already in around 2 m/s, quickly reaching a normal paddling speed of 3-4 km/h, but things get interesting once the wind speed exceeds 6 m/s and you start moving faster and get a lot more power, allowing maneuvers and tricks, like jibes and slalom turns, and get to surf on the bigger waves with the help of the sail (a great feeling!). Agile and nimble, you can play close to each other, bump to each other, use the other’s backwash for tricks, and so on. Unlimited fun! 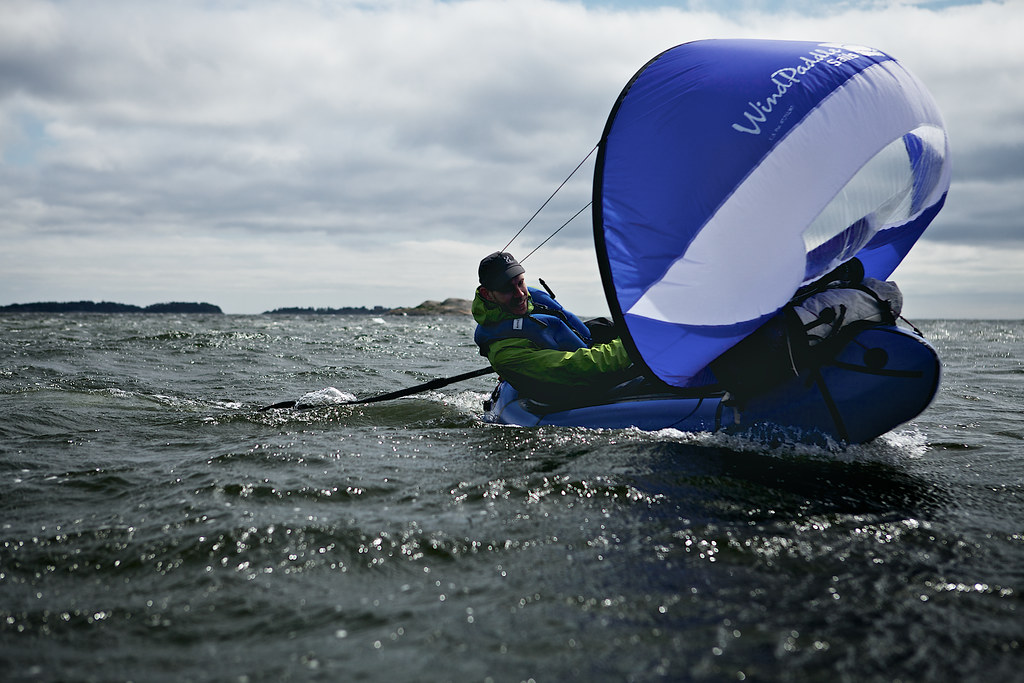 What came to both of us as a pleasant surprise (even after all the positive reviews we had read in advance) was the overall control we had - instead of being dragged down the wind, which would not be interesting at all, we have real control over the direction of the rafts, and despite having no keel we can sail more than 45 degrees crosswind (difficult to estimate, but realistically I feel it could be up to around 50 degrees), which is beyond what we dared to expect. Thinking hats are already on to come up with a portable but effective keel to further enhance the controllability, and to get up to around 90 degrees, which we believe should be possible.

I shot some footage with a GoPro on the fly, a video was published earlier in Vimeo, embedded below. Photos are this time all from Marko’s Flickr album - as usual click any of the photos above to link back to that album for more.