Workweek escapes are great, and they are even better when you kick them off straight on Monday, breaking the week before it barely got started. And that is exactly what went down yesterday, when we rolled out the packrafts behind the office after work, heading out on the sea to explore some of the outdoor islands and islets southeast. 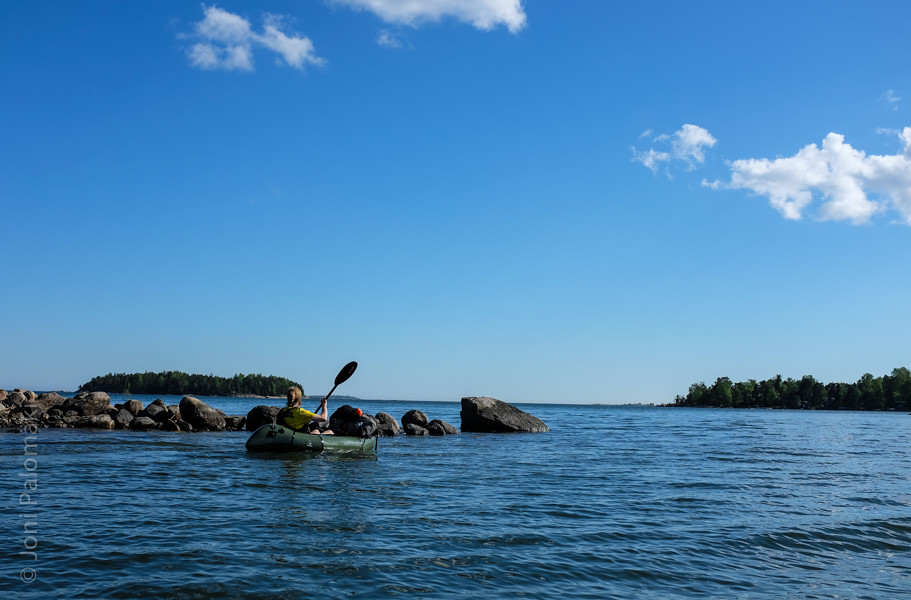 Despite being late May, weather was summery (hot even) and paddling without spray decks was a must, welcoming splashes of refreshment when we pushed diagonally or head-on into the brisk westerly wind and rising swell. 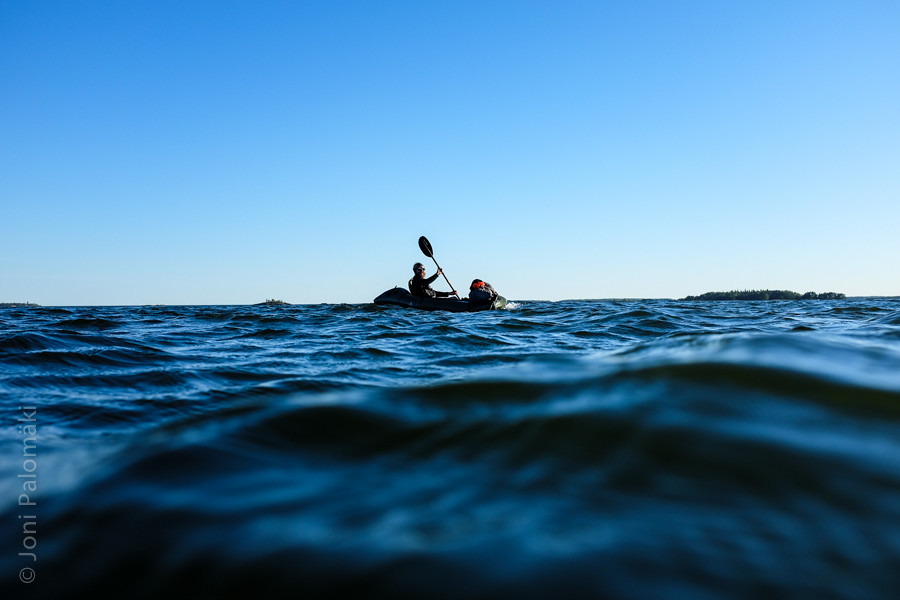 Reaching Vehkasaari and passing the tiny channel running through it, wind had picked up to a reasonable strength (perhaps 5-6 m/s) and we decided to rig ourselves a sail from a tarp. Tying rafts together (tarpacatamaraft?), we planned to try and sail downwind(ish) to our next destination, Käärmesaari island and the Käärmeluodot islets close to it. After first few dry tests we paddled out into the wind and set sail using paddles as masts and also for steering. 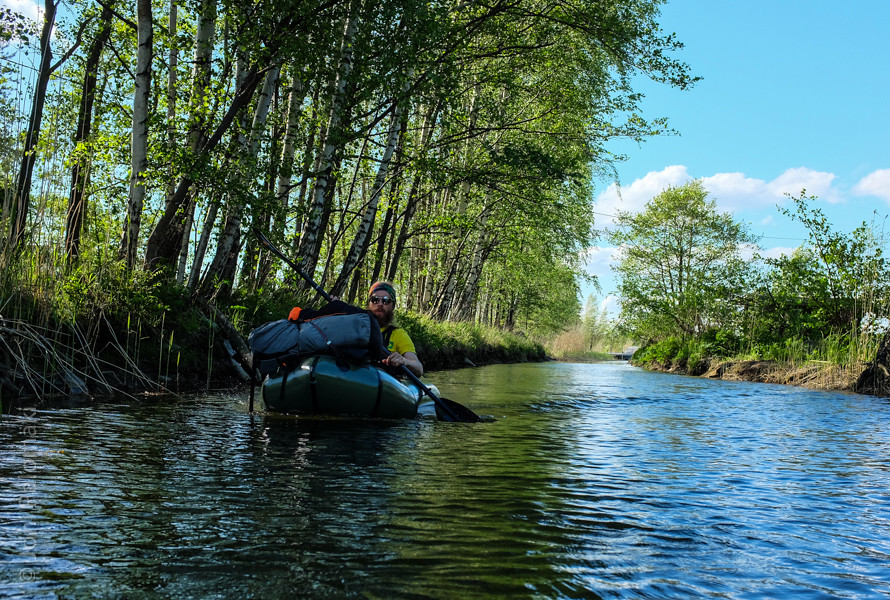 A single packraft having little directional stability, our contraption had none, and at first we were all around. Perfecting the technique of adjusting the angle of the sail, while using the blades for drag steering (as rudder-style did not work out) finally got us going and we made it to our next stop at Käärmesaari. As we were too busy keeping things in control, we couldn’t really take photos, but this snapshot gives an idea how we did it:

Hiking around Käärmesaari we admired great views to the open sea, from the rocky shores. There was a boat parked on this island, so we gradually moved on to the next islet, continuing with our make do catamaran. 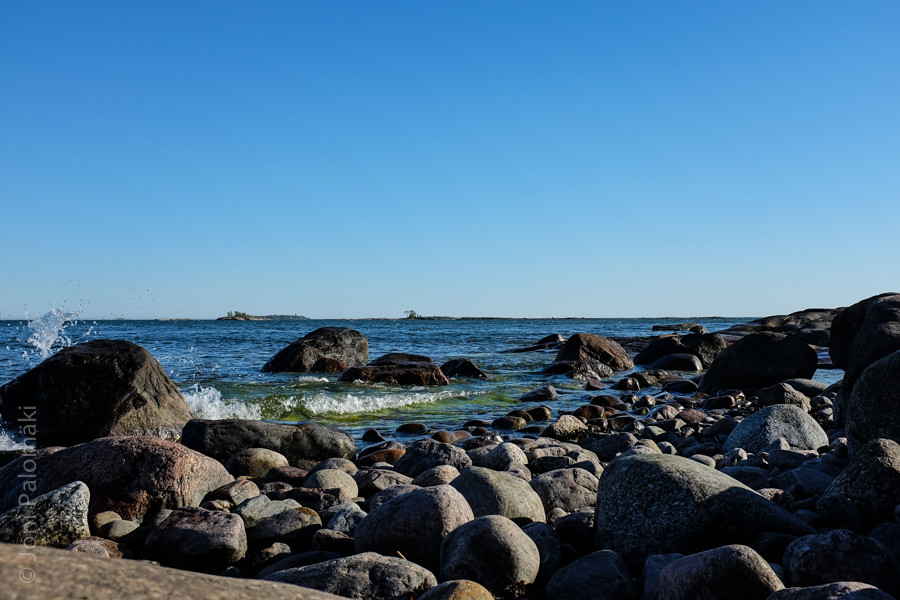 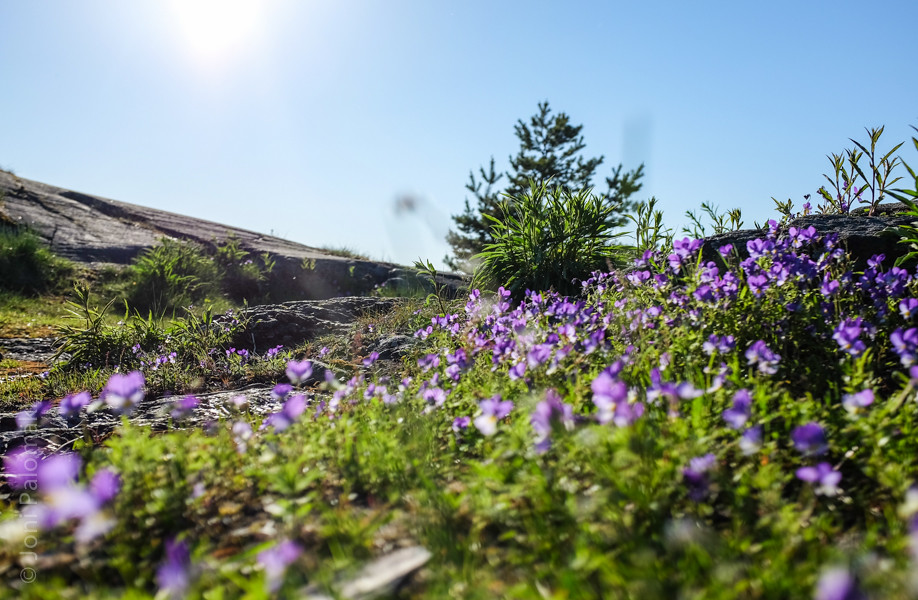 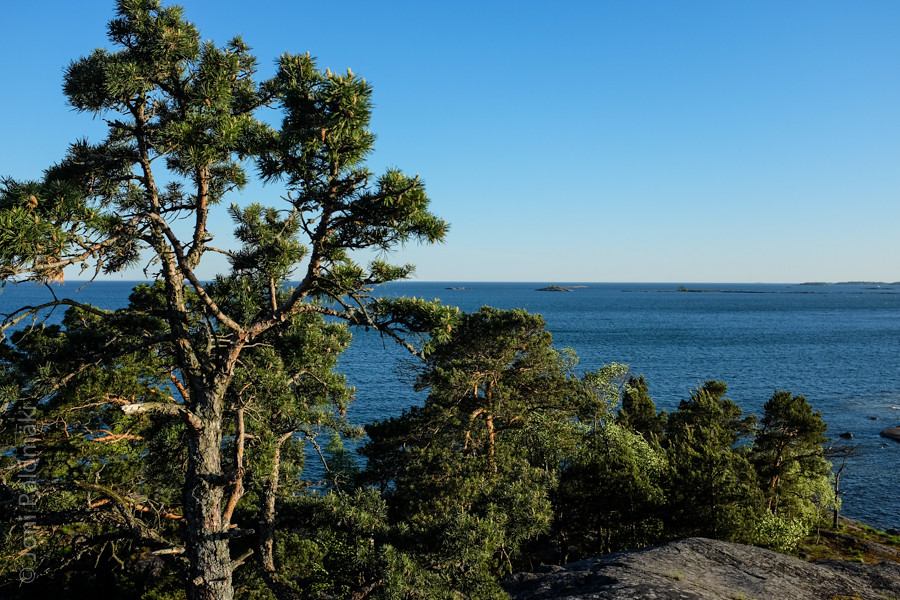 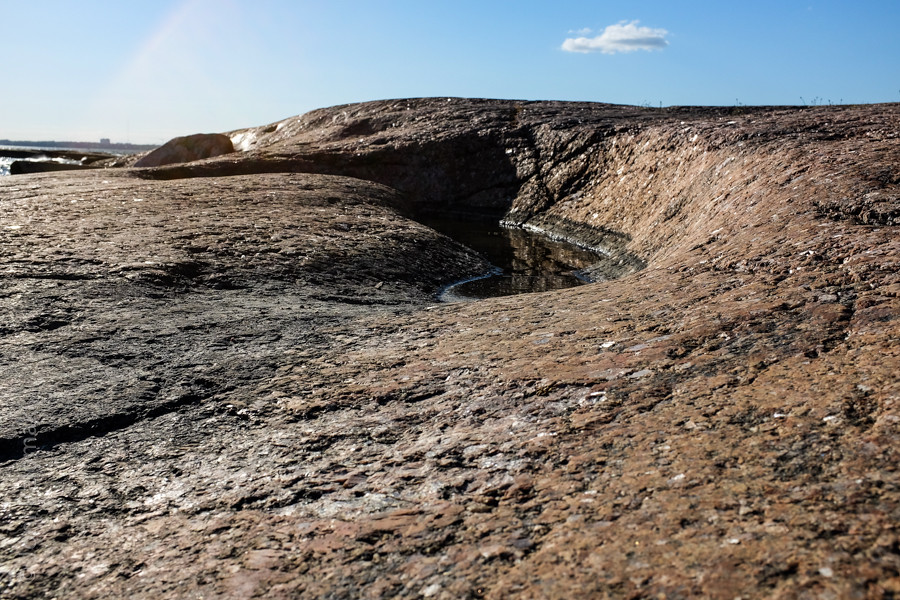 Getting closer to the first of the Käärmeluoto islets, we found a small surf forming on a shoal and, pulling the rafts apart, took some rounds to try and catch it. Surfing some of the bigger waves was fun, though tricky, and while we had stayed pretty much dry until this point, it was time to get soaked from the waves rolling over, following failed attempts. 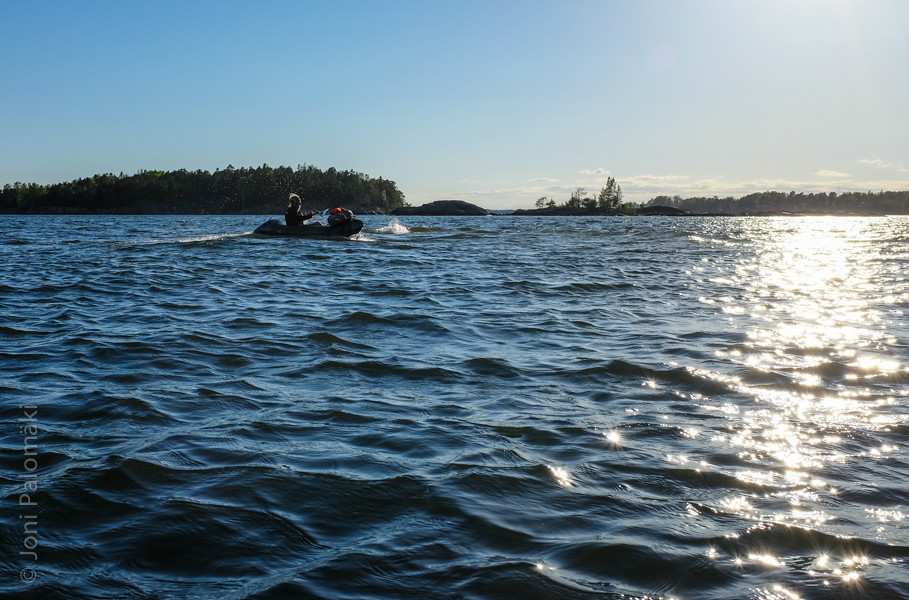 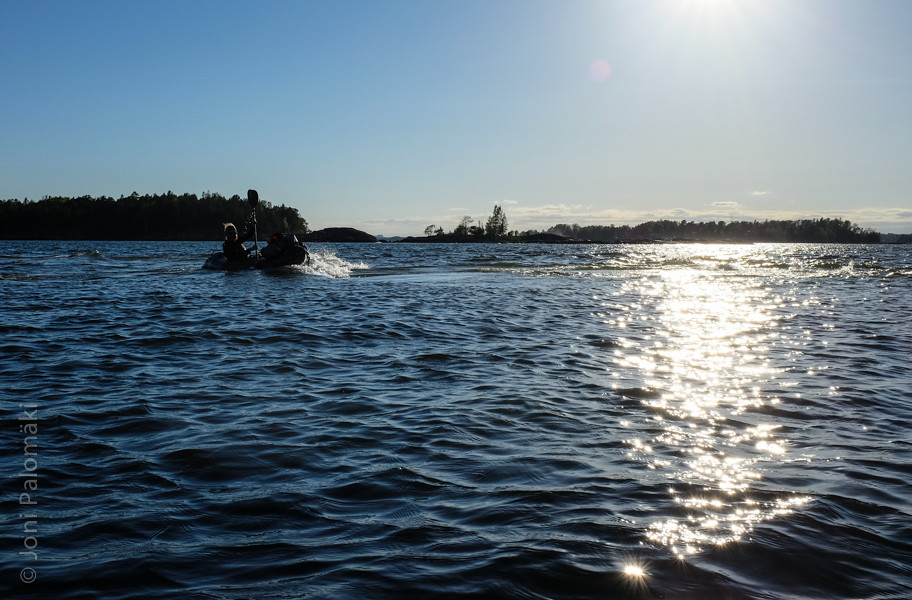 We stopped over at the two islets nearby (one of them occupied again by a boat), and careful not to distract nesting birds decided to camp on the last one, bringing us also the closest for the return trip next morning. A small islet with high rock cliffs and open space with no thick forest to block views, was a great place to camp out. Strolling around we enjoyed the last rays of light and receding warmth, wondering how the weather would turn out to be next morning. 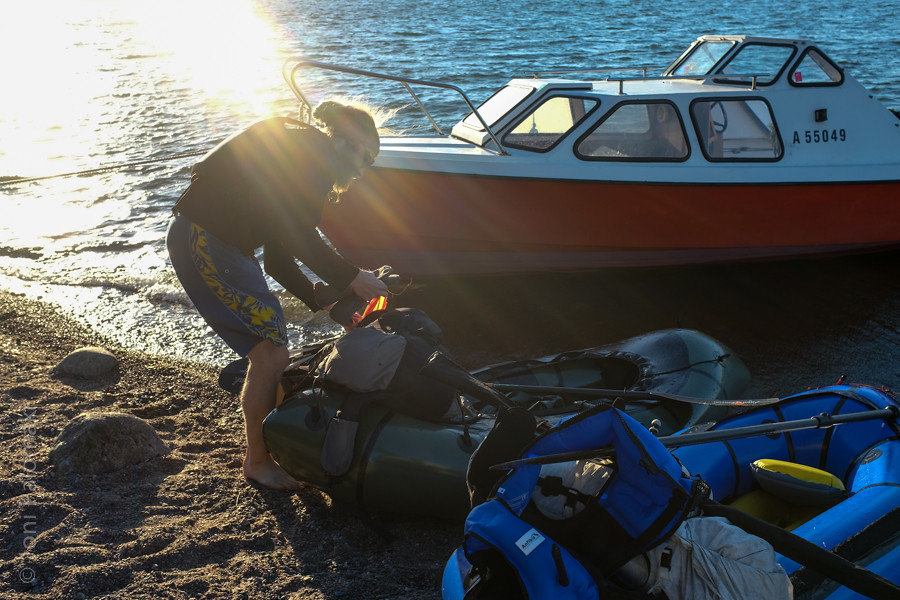 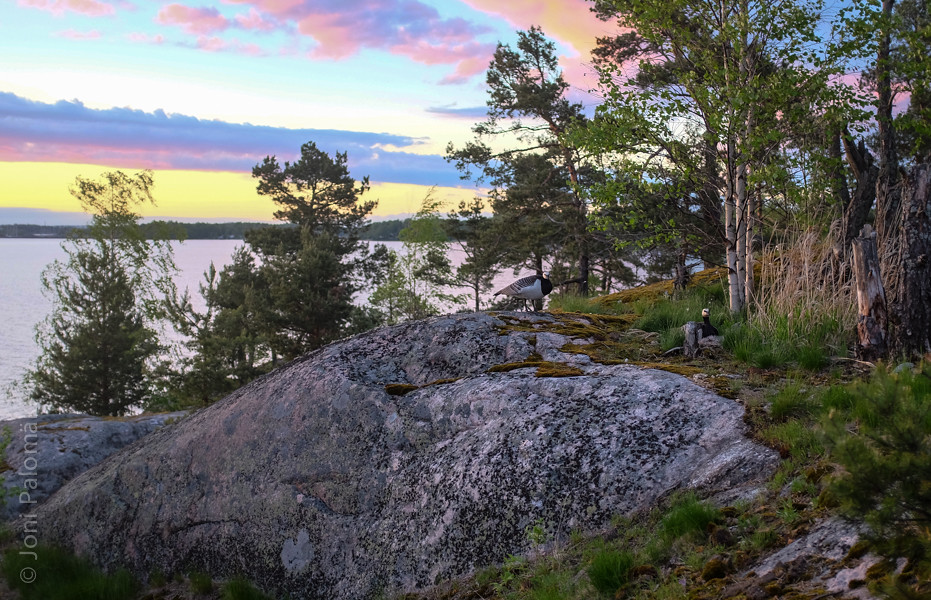 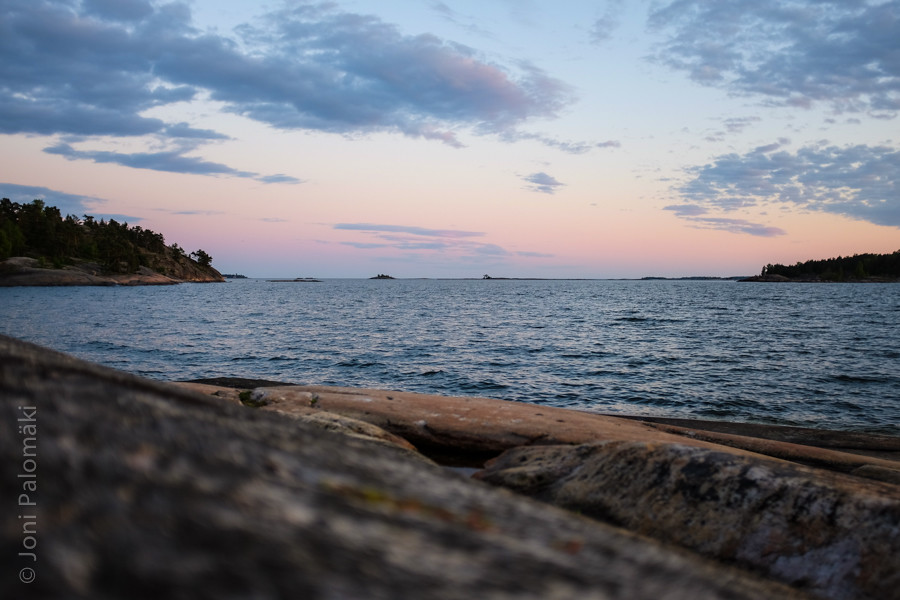 Forecast had promised the wind would turn northerly overnight and pick up a bit, while the temperature would drop from the 20 something to just 6-7 degrees celsius. Waking up few times during the night I noticed the wind turning and gaining strength, and by the wake up call around seven in the morning, the summery feeling was long gone, and the grey sea churned around us, blending in the misty horizon. 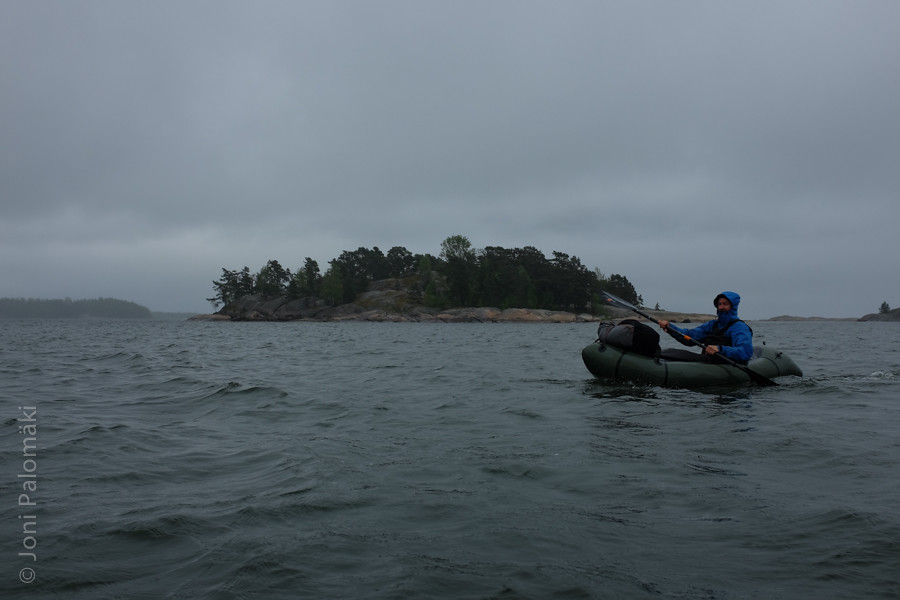 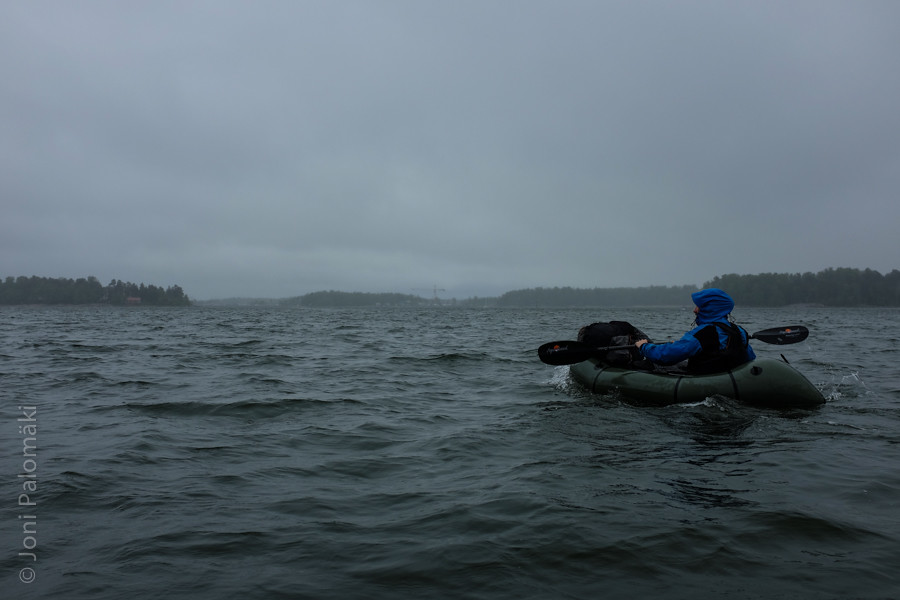 Last leg of the trip was to paddle into the wind, back towards the shores of Länsiväylä. This took us a fair hour (three kilometers in distance), finishing through a wind tunnel underneath a bridge for that last final push. Back at the starting point, it was time wrap things up and get refreshed before a day at the office. What a fun roundtrip, more will definitely follow! 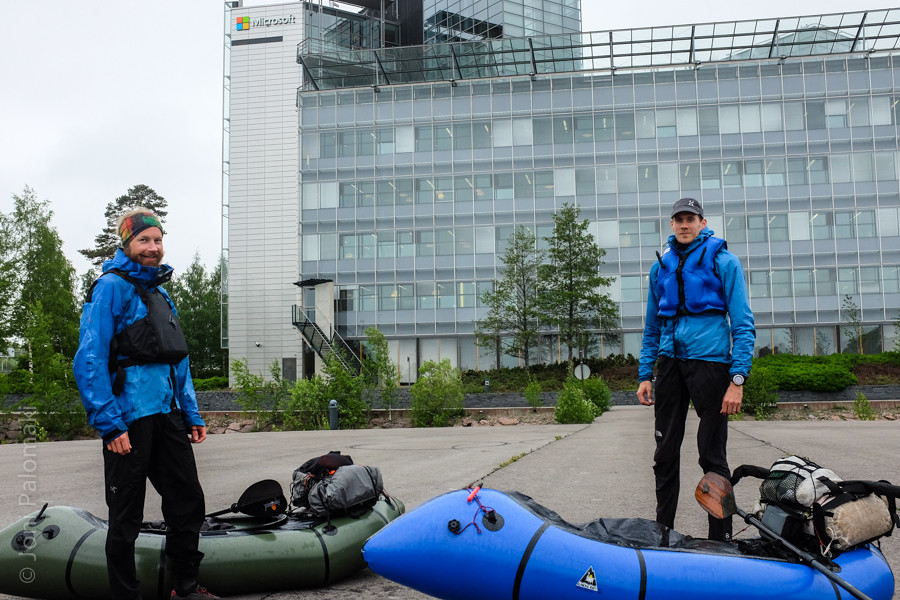