Each time I visit family and relatives in Ostrobothnia, I try to reserve some time to head outdoors and visit interesting places hiking, paddling, cycling or whatever is appropriate for the given season. One of the gems I found this summer was the Lauhanvuori National Park, southwest of Kauhajoki, which I visited by bike in July.

Best known as having the highest ‘mountain’ (a true mountain indeed in the scale of Ostrobothnia) in Western Finland, rising 231 meters above sea level, and of its ancient seashores, called ‘kivijata’ or ‘jata’, this national park extends across roughly 54 square kilometers of hardwood forest with podsolic soil, with springs, ponds and small lakes to enjoy, and of course those aforementioned boulderfields and different types of bog. 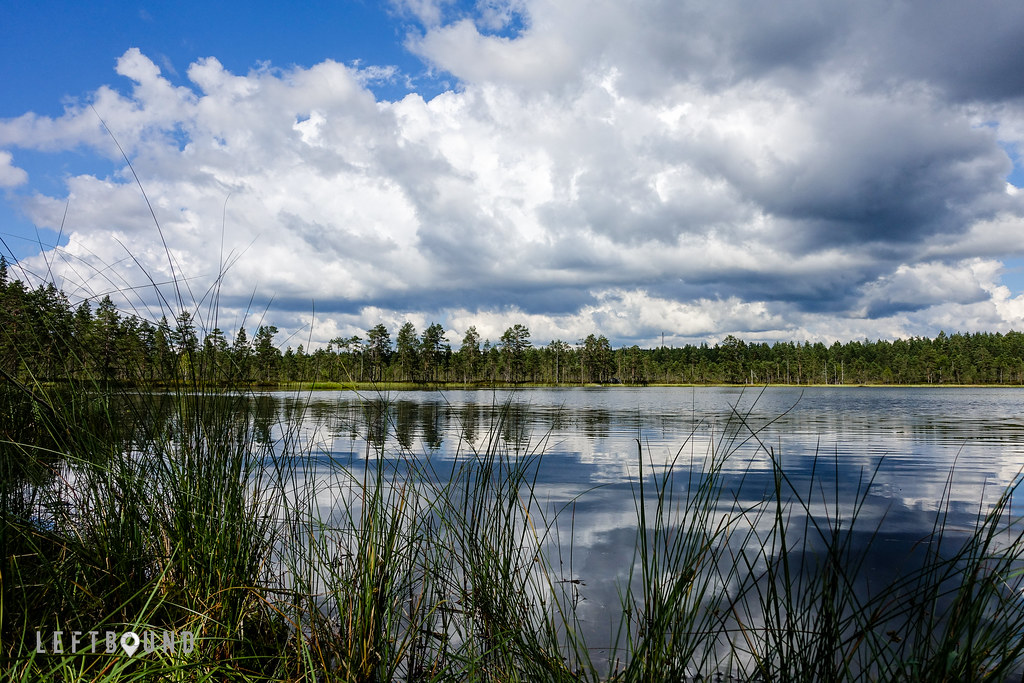 Uncommon within the current 39 national parks in Finland, cycling on the trails is luckily not forbidden in this particular national park, but cautiously encouraged within the well-established (and sign-posted) network of trails. As several studies have concluded, mountain biking generally has an (environmental) impact that is less than or comparable to hiking, but one should still thread carefully to avoid any unnecessary conflicts. Bikepacking style of exploration though is less likely to cause friction. During my visit I had only positive encounters with hikers (while I saw no other cyclists), part of which might be due to riding a fatbike, part to my chatty personality, and the rest surely due to the merry folks of Ostrobothnia! 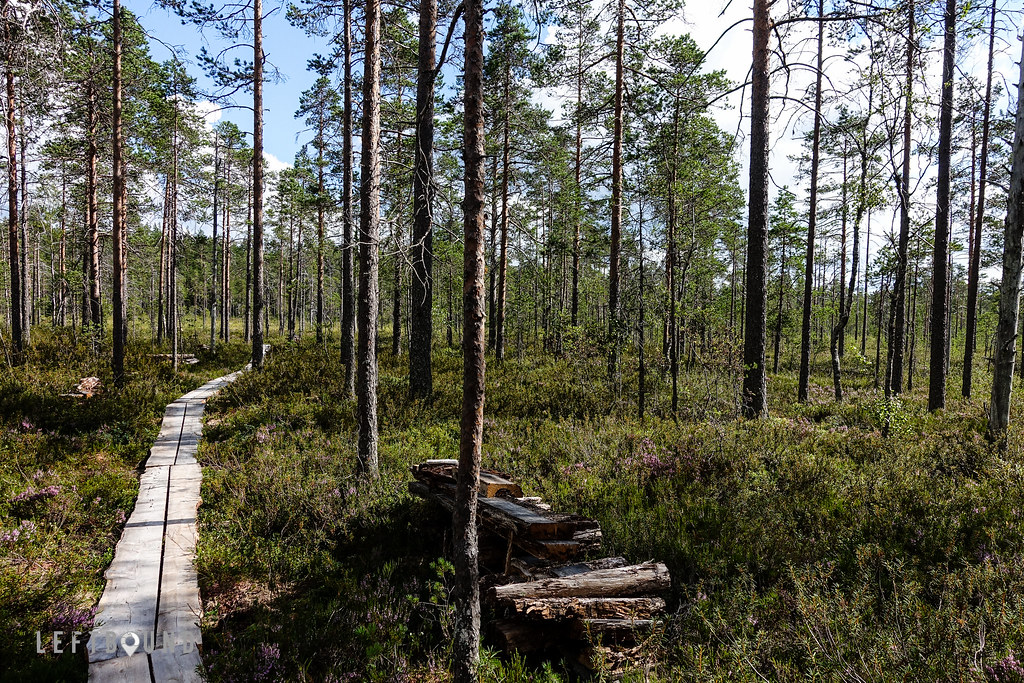 During the day I was mostly alone, as I only met few hikers at the trailend and close to the central parking lot, not far from the lookout tower. Just a sample of one day over one weekend, I did have a short talk with a family, regular visitors themselves, who confirmed park really does not seem to get a whole lot visitors, outside of the parking lot surroundings - what a shame. 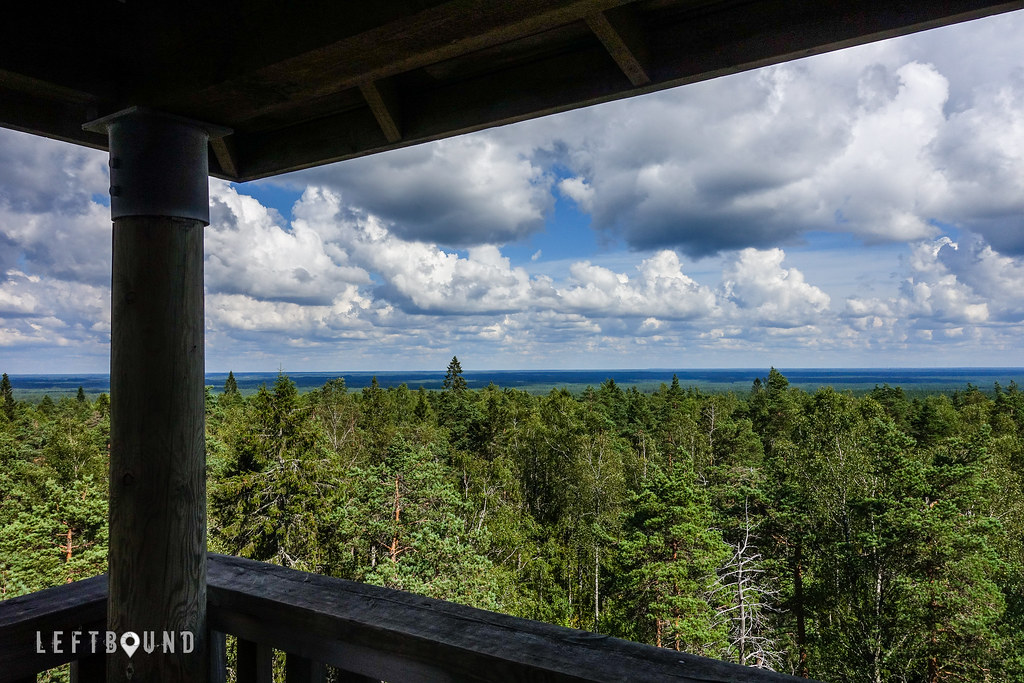 Spending a full day on the trail, from dawn till dusk, I got to cycle most of all rideable trails across the park, some 40+ kilometers in total, plus some on the gravel roads, connecting few trailheads. I did not carry a map of the area, but followed the generally well-marked trails and checked my bearings on the GPS, when I was not sure which direction best to take. In addition to marked routes leading to specific attraction or a vantage point, there are plenty of trails to go about and around, so that’s exactly what I did. 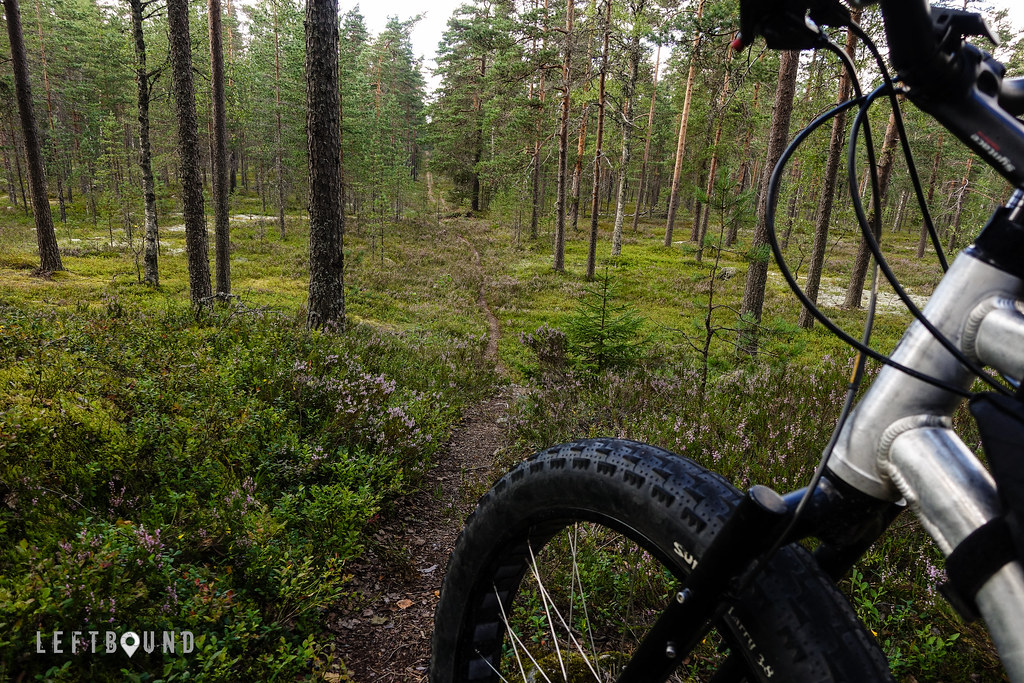 Taking my time to stop and enjoy the varied scenes, and to harvest an ample amount of billberies and raspberries as I came across good spots, I rode anything from overgrown forest roads (doubletracks really) and well maintained duckboards to technical single track and fast-paced trails. I was especially enchanted by the small sand-bottomed creeks, populated by brown trouts (fishing not permitted), with chrystal clear waters and mesmerizing views such as this churning sand in a tiny pond (video in Youtube): 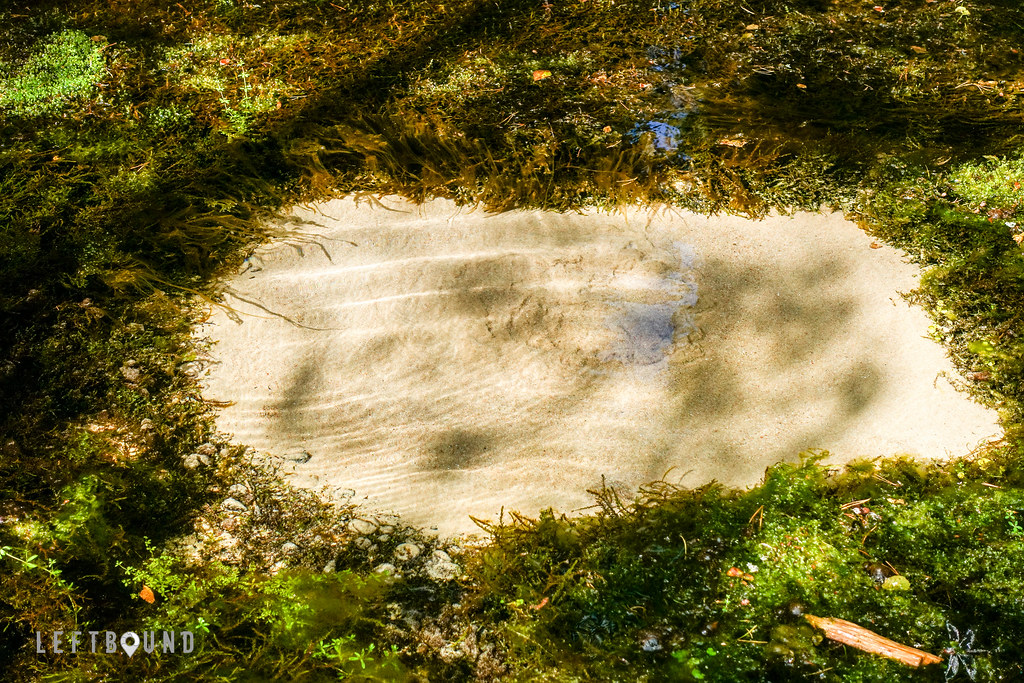 Easiest trails were around the Lauhanvuori lookout tower and around the lake Spitaalijärvi and Kaivolammi pond, and heading southwest, kilometers long network of duckboards greets the visitor, providing access across bogs and into the boulderfields. 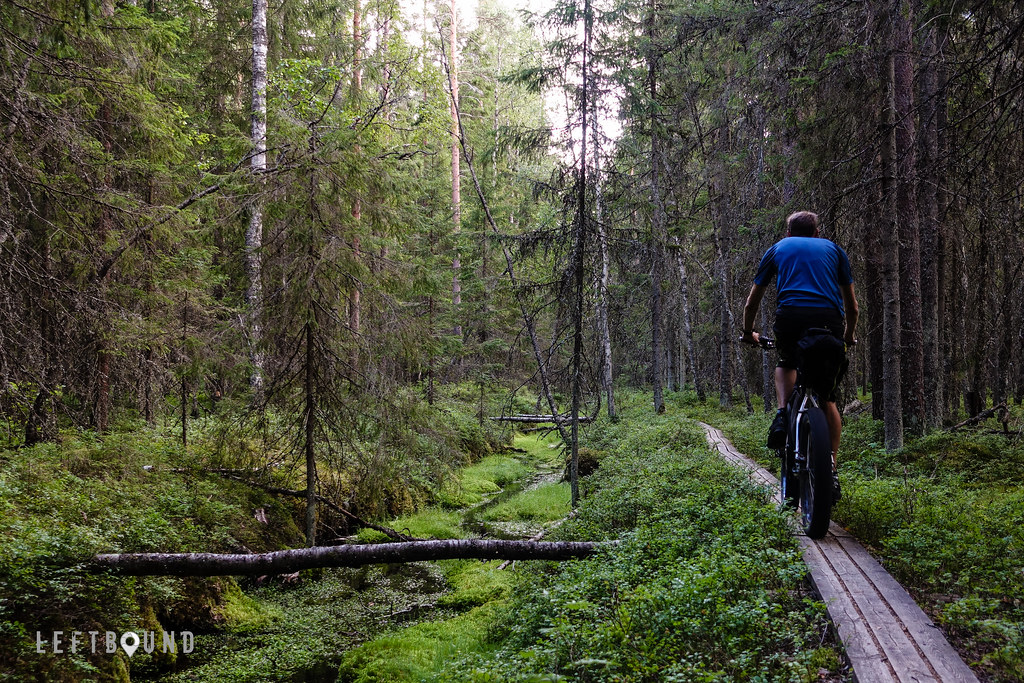 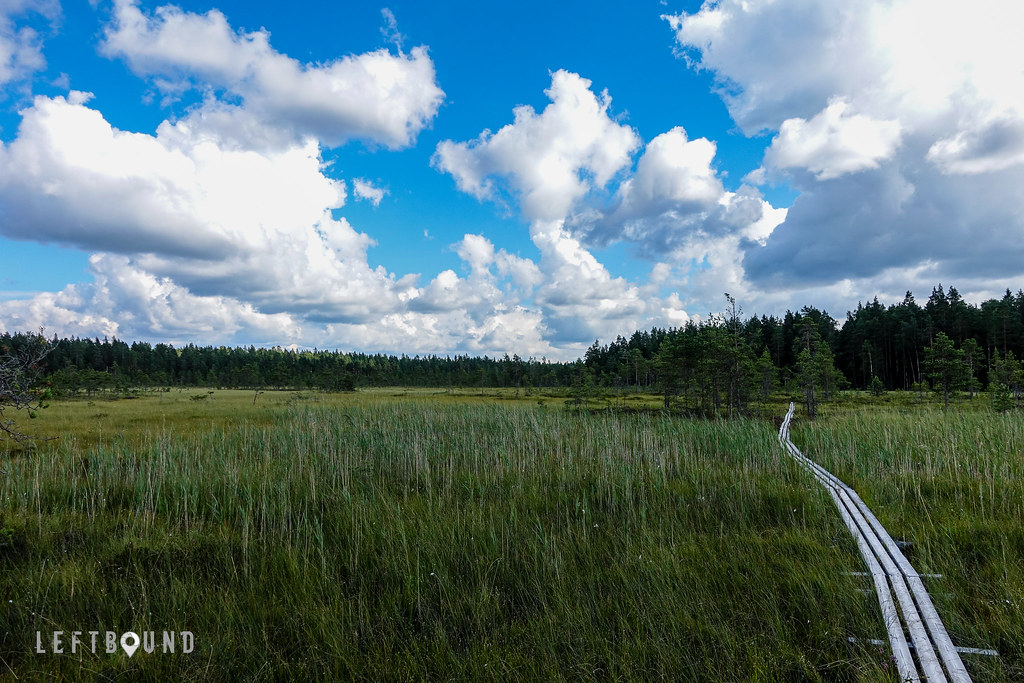 Towards west, around Lauhansarvi and Huhtakorpi is where I found the narrowest and most technical trails, and also some, hopefully about to be restored, broken down duckboards, before arriving to Ahvenlammi pond. There are few springs in the park, to quench your thirst in - I filled my reserves in Huhtakorpi spring. 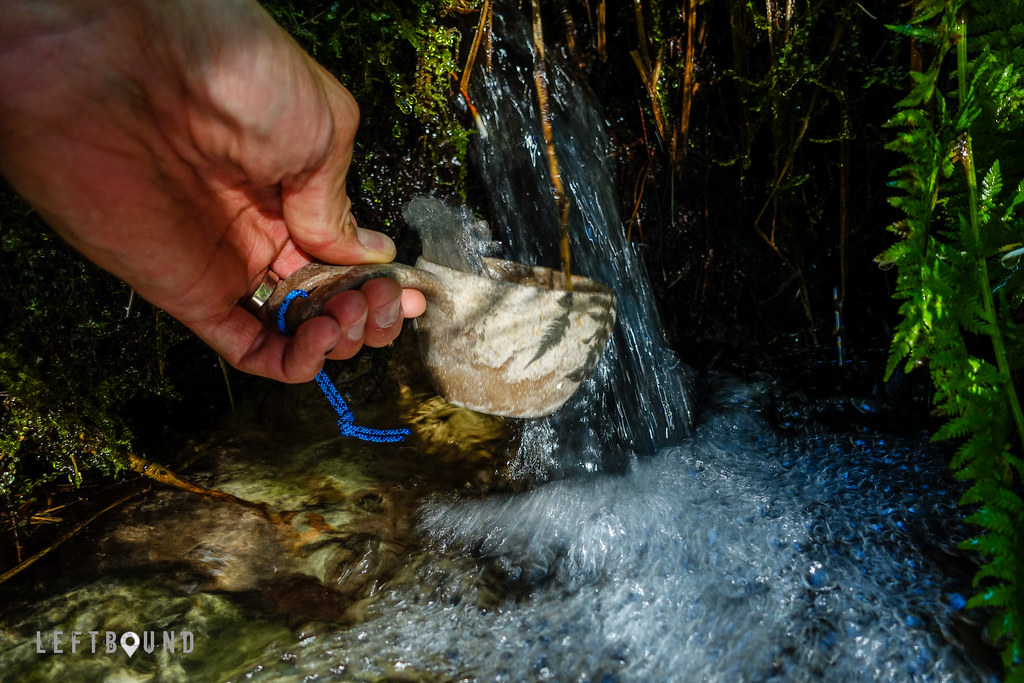 Ahvenlammi used to be the camping spot north of the area, a serene mire of a lake, but the fireplace there is about to be torn down, and new site established at another pond, aforementioned Kaivolammi. As the fireplace was still intact, with a poster informing about the upcoming change, I had my dinner there, before continuing my circle around the park as the sun was setting, and to have a post-ride dip in the Spitaalijärvi (‘Leprocy Lake’). Lake Spitaalijärvi is an acidic lake with pH as low as 4.7, with presumed healing properties - hence the name. 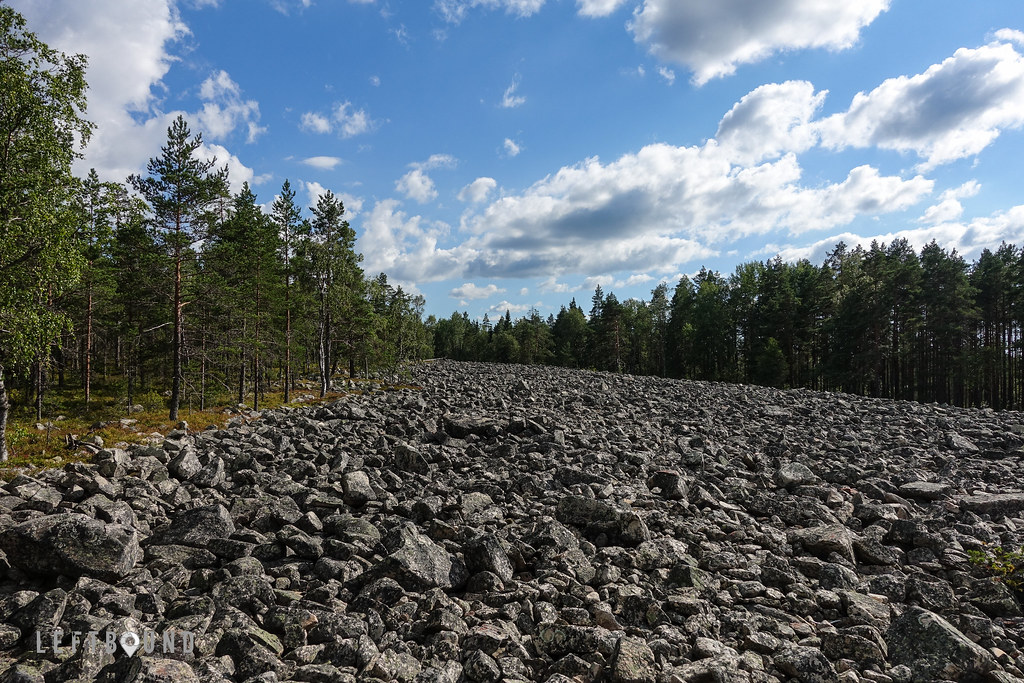 A great long day on a bike, glad I picked this one up for one of the summer outings and I highly recommend it for a daytrip or an overnighter on a bike. Map of the area and some other vital pieces of information can be found here. Similar to few other destinations in this area I’ve visited in the past (1, 2), also this one is featured in the Seikkaile Suupohjassa -resource, maintained by Suupohja Development Association (Suupohjan Kehittämisyhdistys ry). 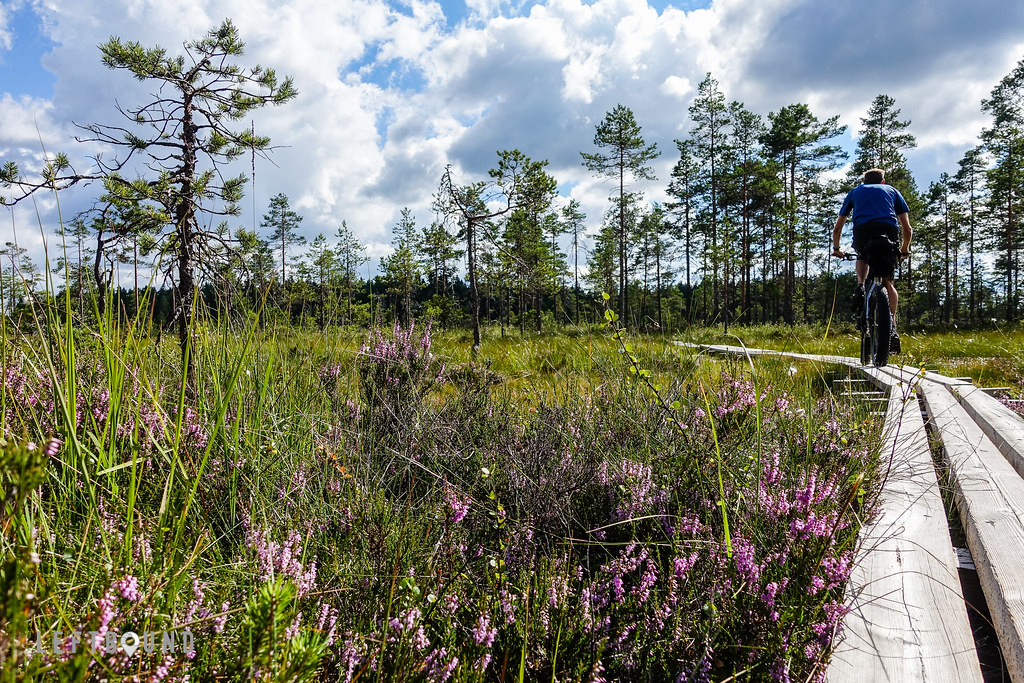 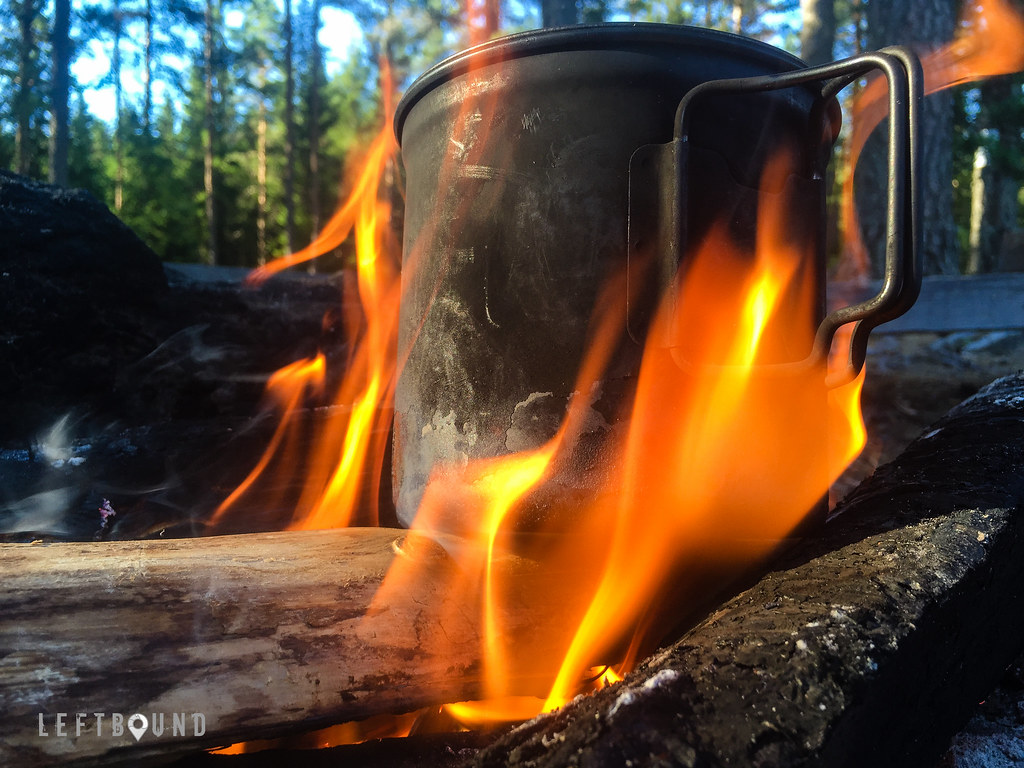