Few years ago, we kicked off a continuous roll of overnighters, something we call ‘Outdoor Monthly’, as a loose group of friends who enjoy outdoors. Initially, we planned for reasonable one night (or one trip, that could be few nights in duration) per month schedule, but despite the best efforts, we haven’t been able to do it every single month. But it’s the idea and the effort that counts, right, and each month we do our best to make it happen, on top of other activities each of us do on our own. 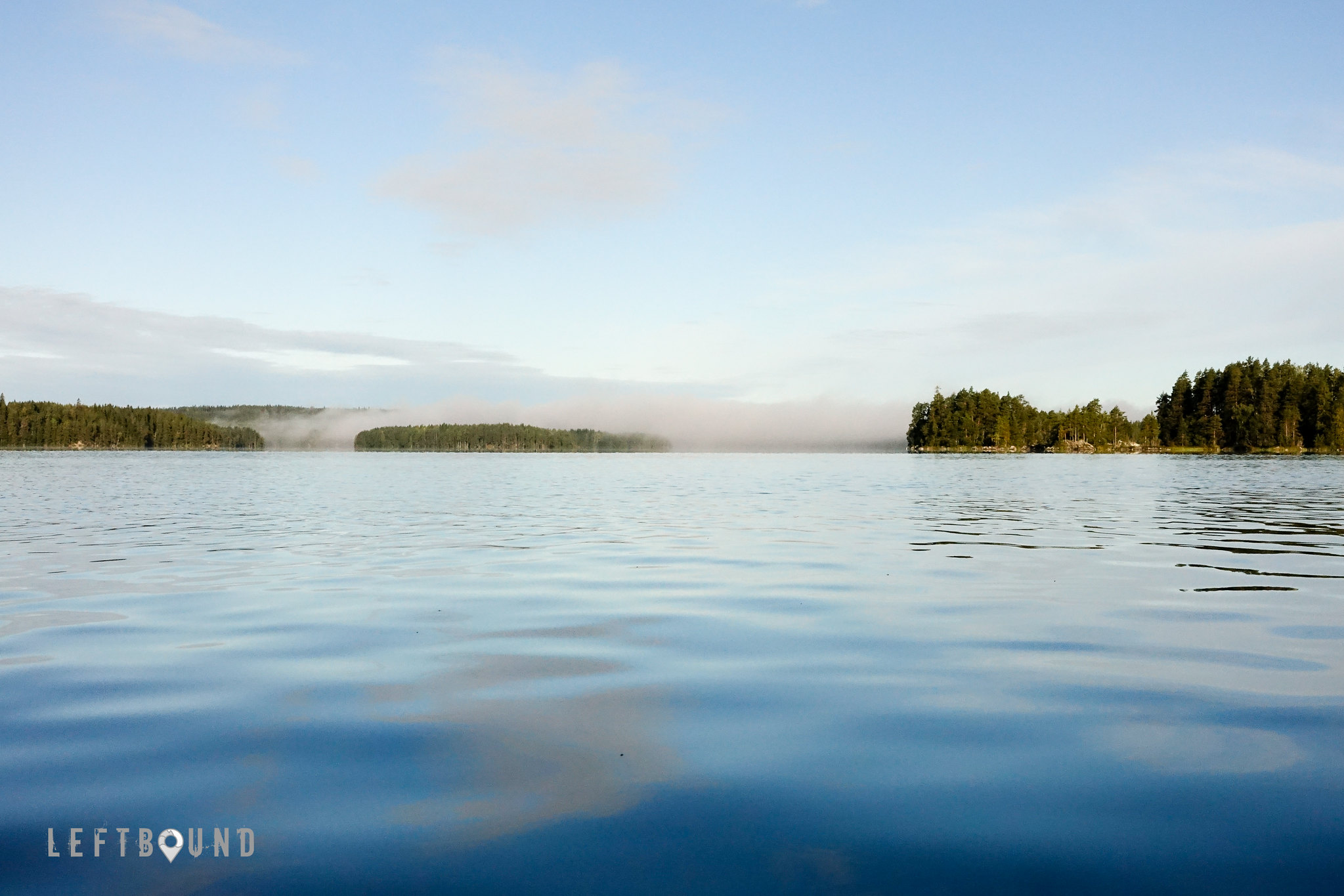 Last weekend, after a short break over the summer months (the typical gap we seem to have each year), we had our 33rd event. Dates set, we agreed we would visit the Isojärvi National Park near Kuhmoinen, and as the park gets its name off its large lake, we chose paddling as the activity. 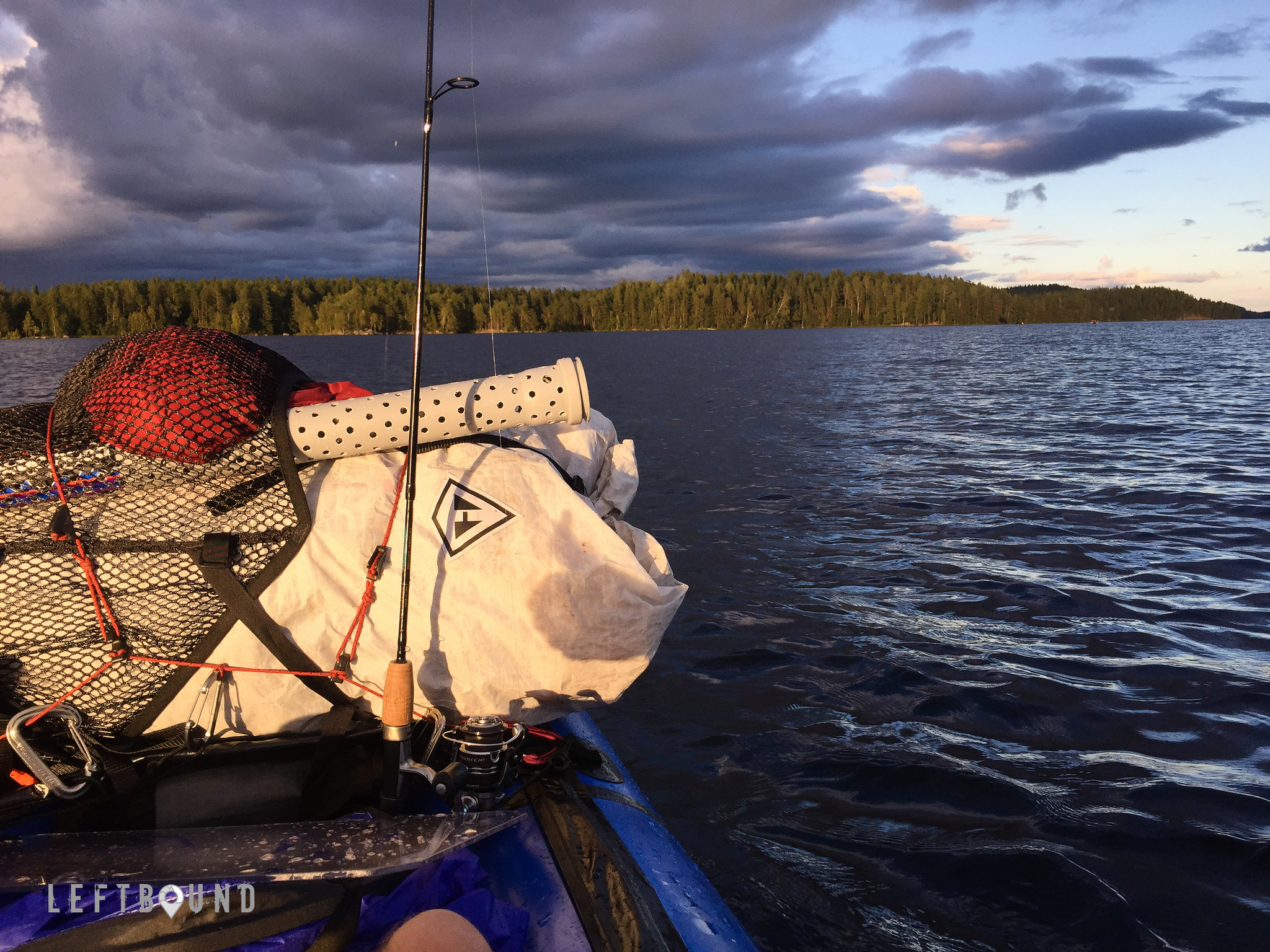 Amongst the five of us joining for this outing, we had an array of lake-worthy tools to put down in Nokipohja, where we arrived on Friday evening - A single kayak, a family canoe to carry two, a lightweight kevlar canoe for one, and a packraft for me. As I certainly had the slowest of the vessels, I also brought my WindPaddle Adventure sail, to cruise along as the wind and its direction would match our path - and luckily it did! 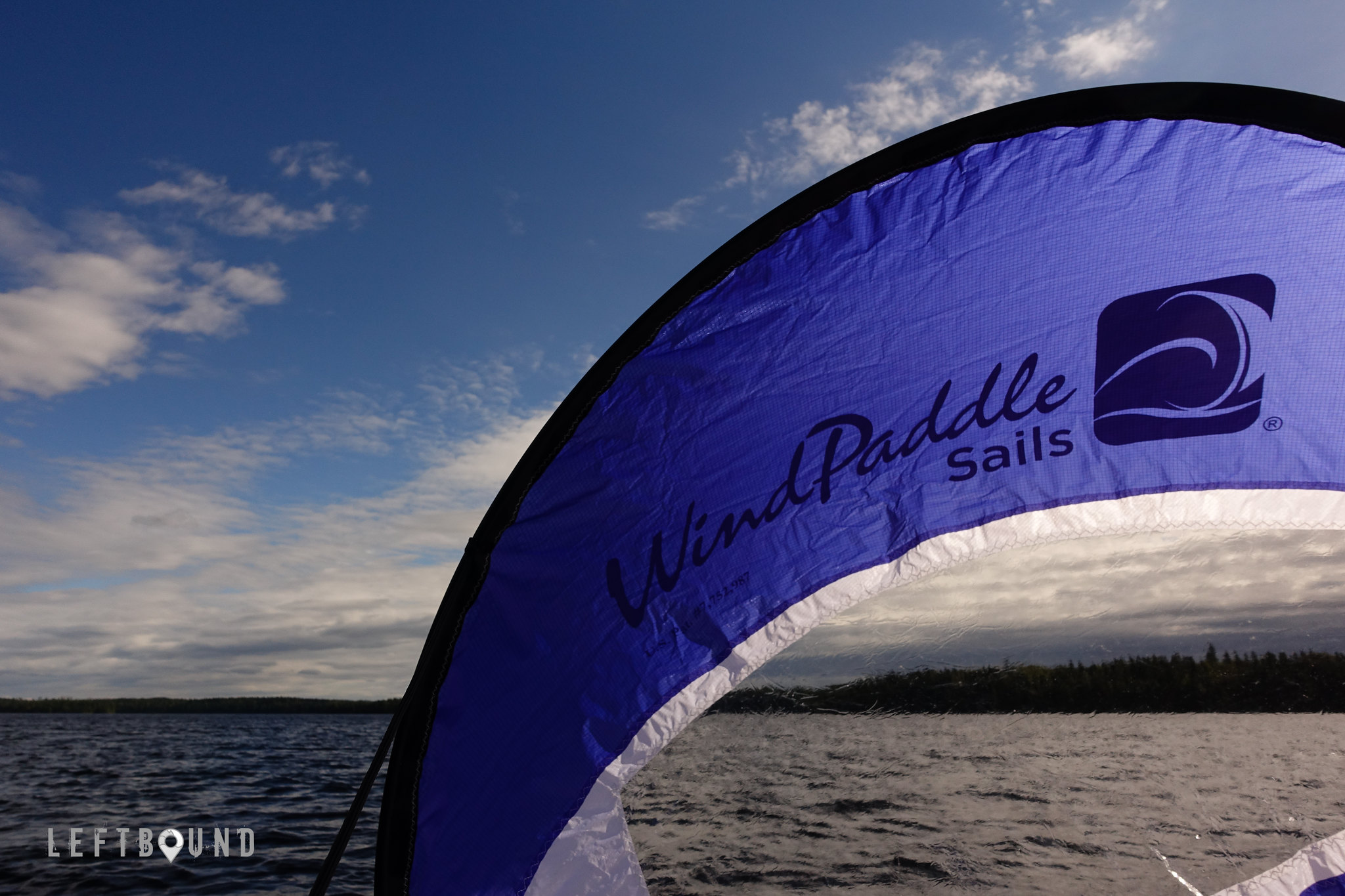 Isojärvi National Park, about 23 square kilometers in size, is situated mainly south of lake Isojärvi, but extends also to the north, and includes several separate nature reserves. There are roughly 30 kilometers of marked trails, 4 lean-to’s and two separate fire places. As we chose to explore the park paddling, we only visited one of the lean-to’s, where we also stayed overnight, in the small island of Renusaari. 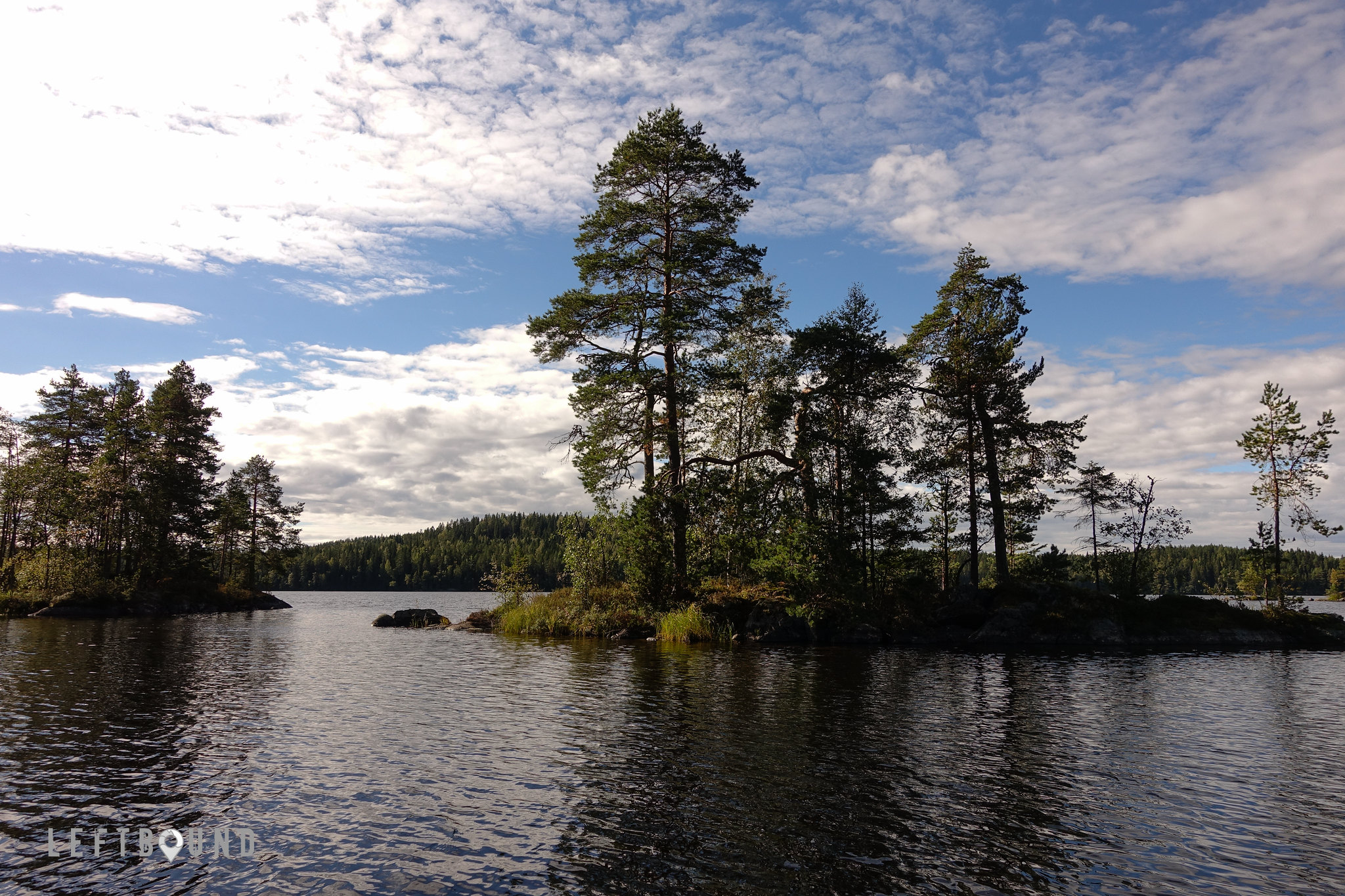 A perfect spot to camp out, the lean-to was built right next to the lake, with a view towards the setting sun. Water in Isojärvi is very clear and the lake is good to drink from - boil it if in doubt. Paddling to Renusaari, potatoes, onions and dill in my pack, I hoped to catch some perch to make a soup, but I only caught one, so I had to resort to my plan B, fish soup turned into a reindeer meat stew - delicious nevertheless! 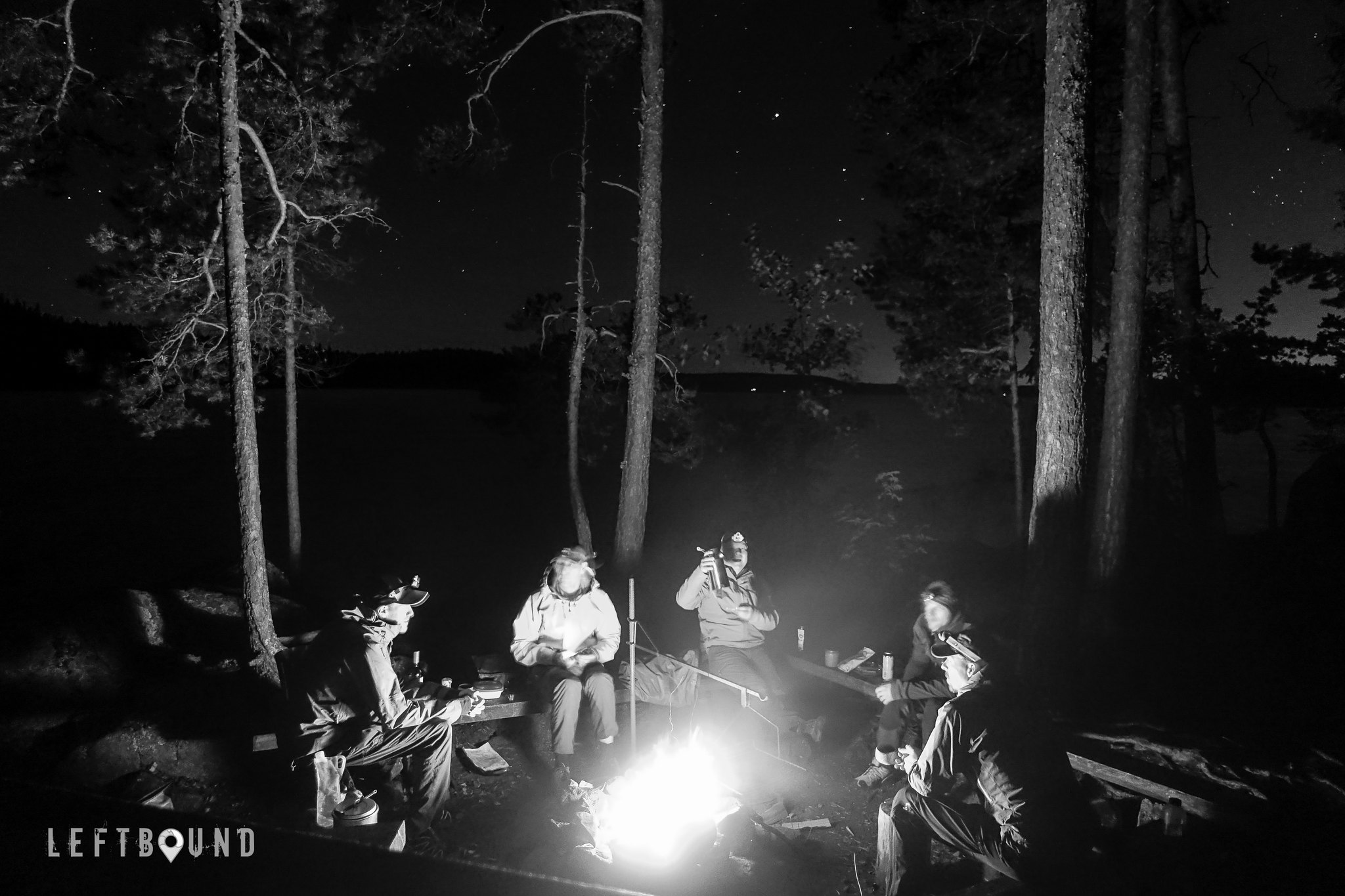 On Saturday, we paddled around the north side of the lake Isojärvi, going in and out and in between the small islands and islets, enjoying the summery weather and relaxed paddling. I continued to fish, and even got a glimpse of a large pike underneath my raft, but throughout the day caught nothing. 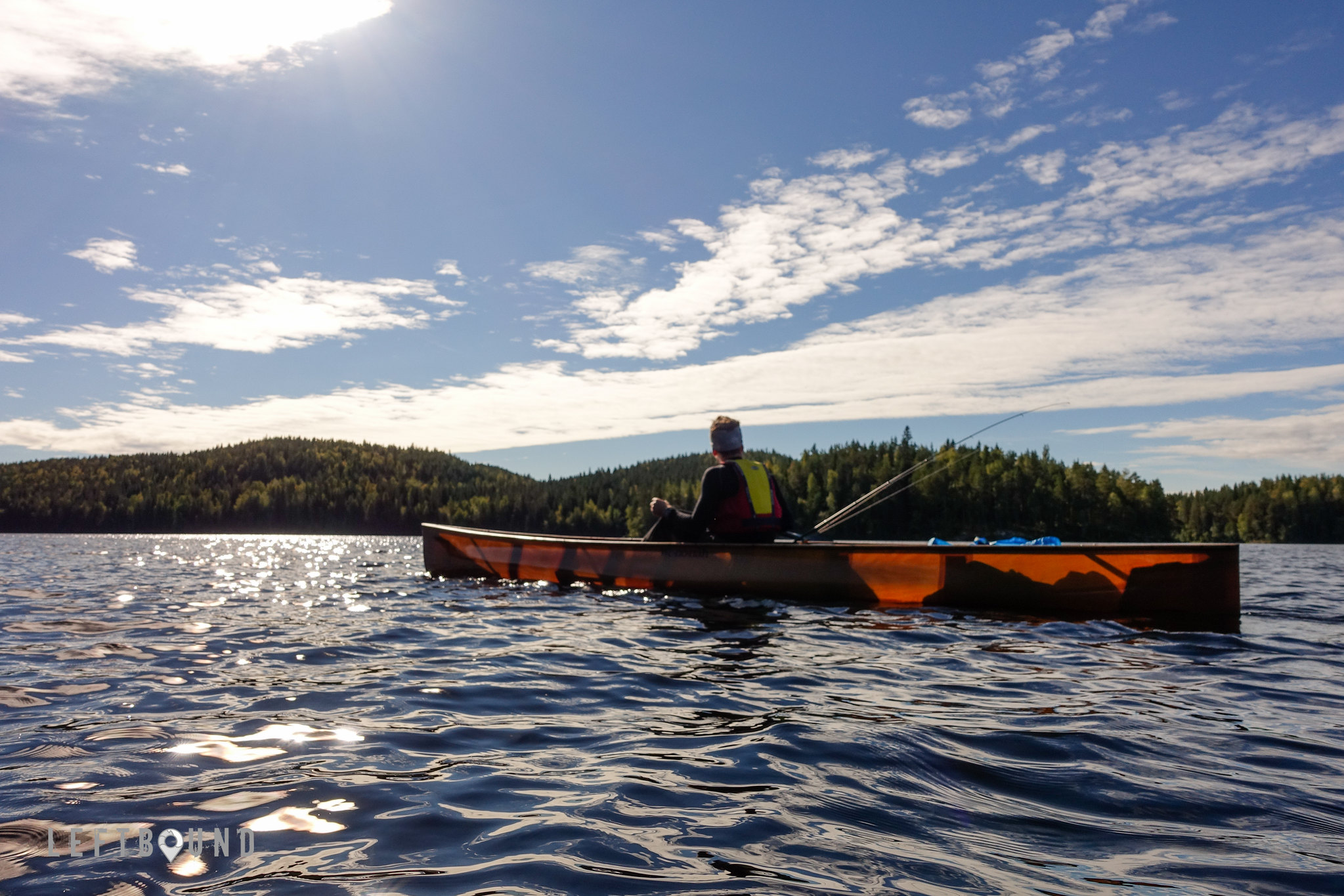 We stopped in one of the scenic small islands with large boulders that were characteristic for this wilderness-like lake, serrated by the breakage of earth crust. It is this what also makes some of the trails in the area tough to hike through, with high cliffs and boulderfields to negotiate. 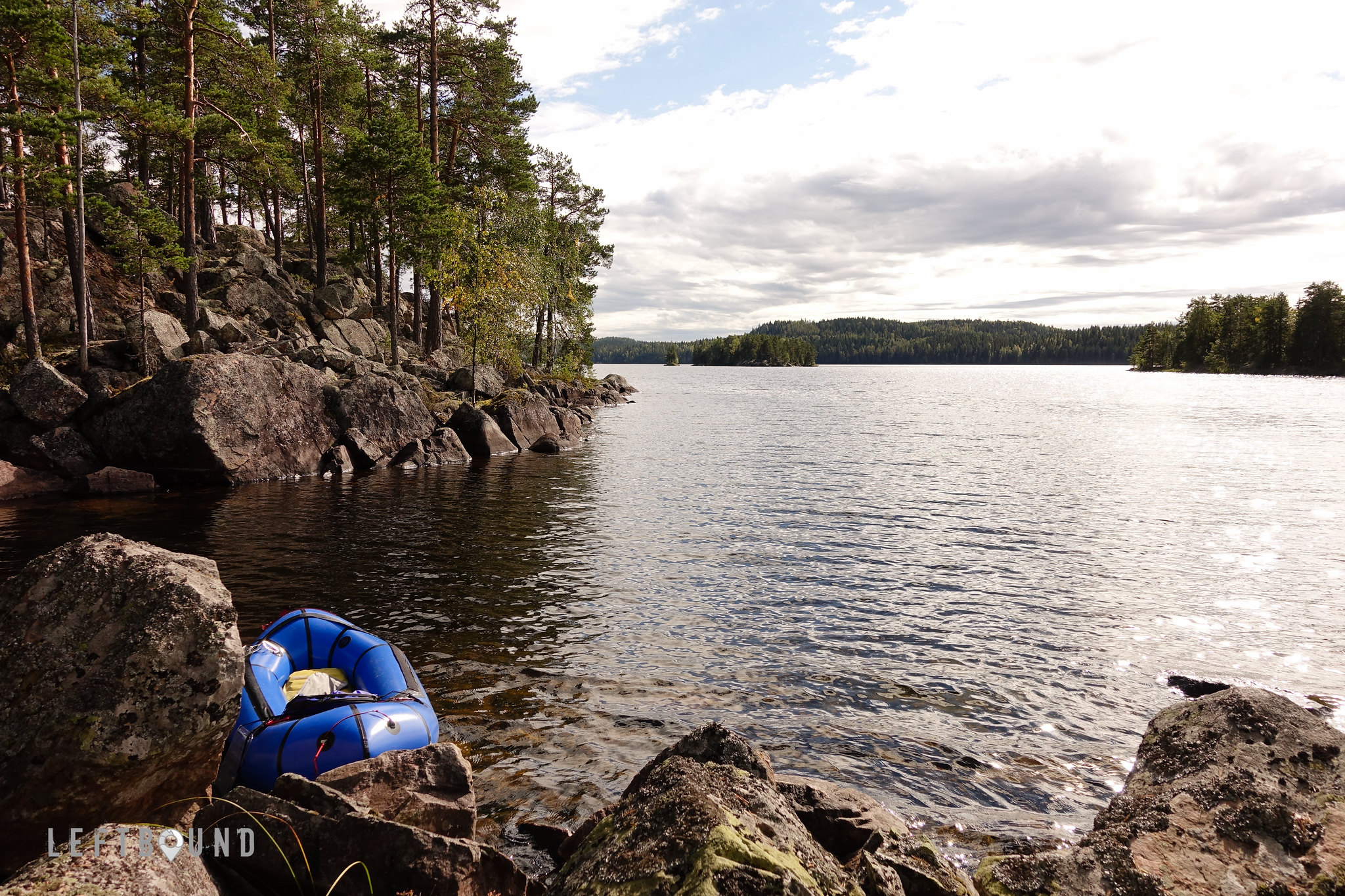 Fish was hiding from us, but we saw a common crane swooping over the lake, and listened the barks and cackles of red-throated divers (Kaakkuri) at the night fall, as we gazed over the starry sky. Night was clear and a bit chilly, though I slept comfortably in the lean-to, sheltered from the wind by my packraft, hung up at the entrance. 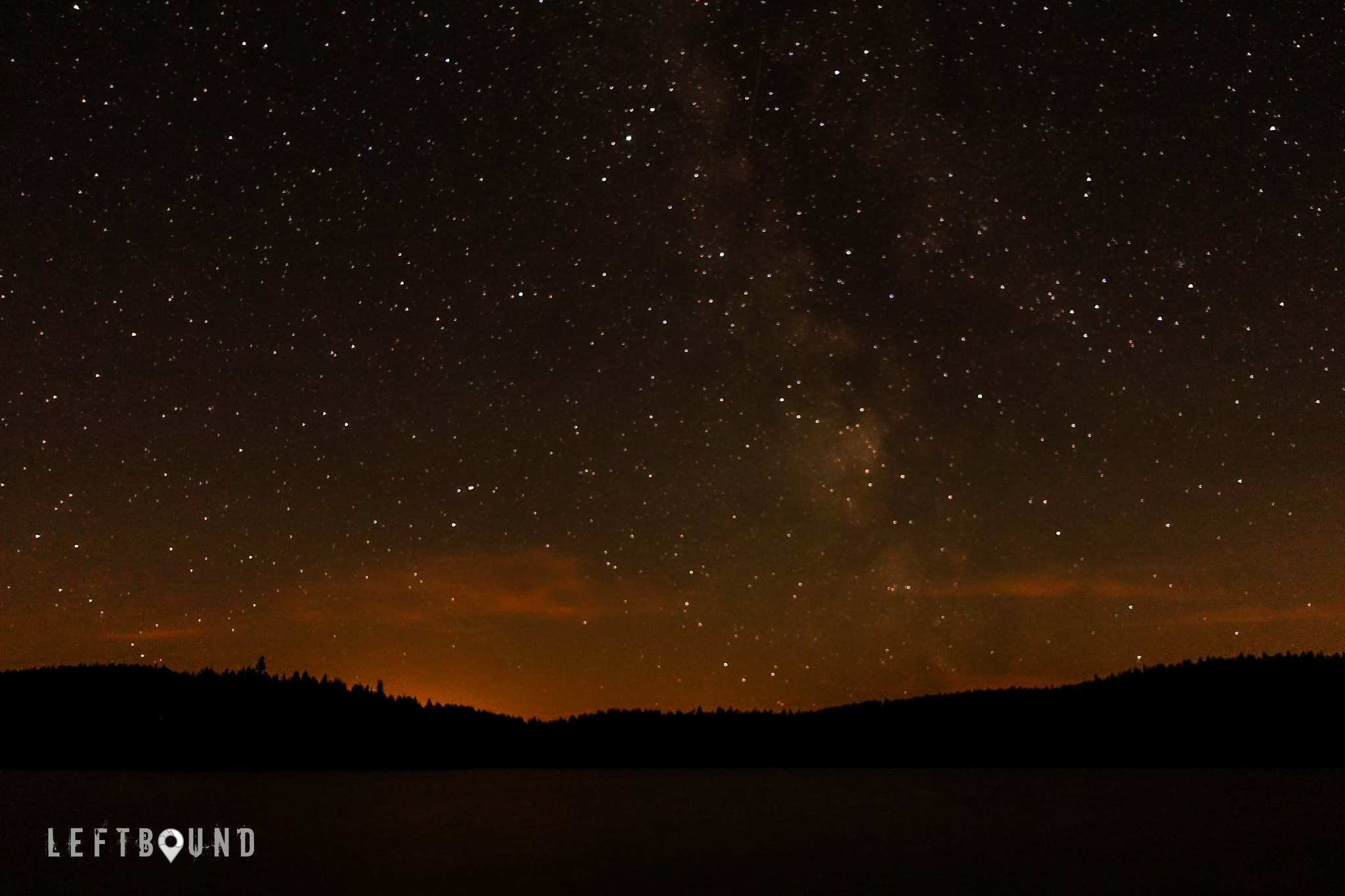 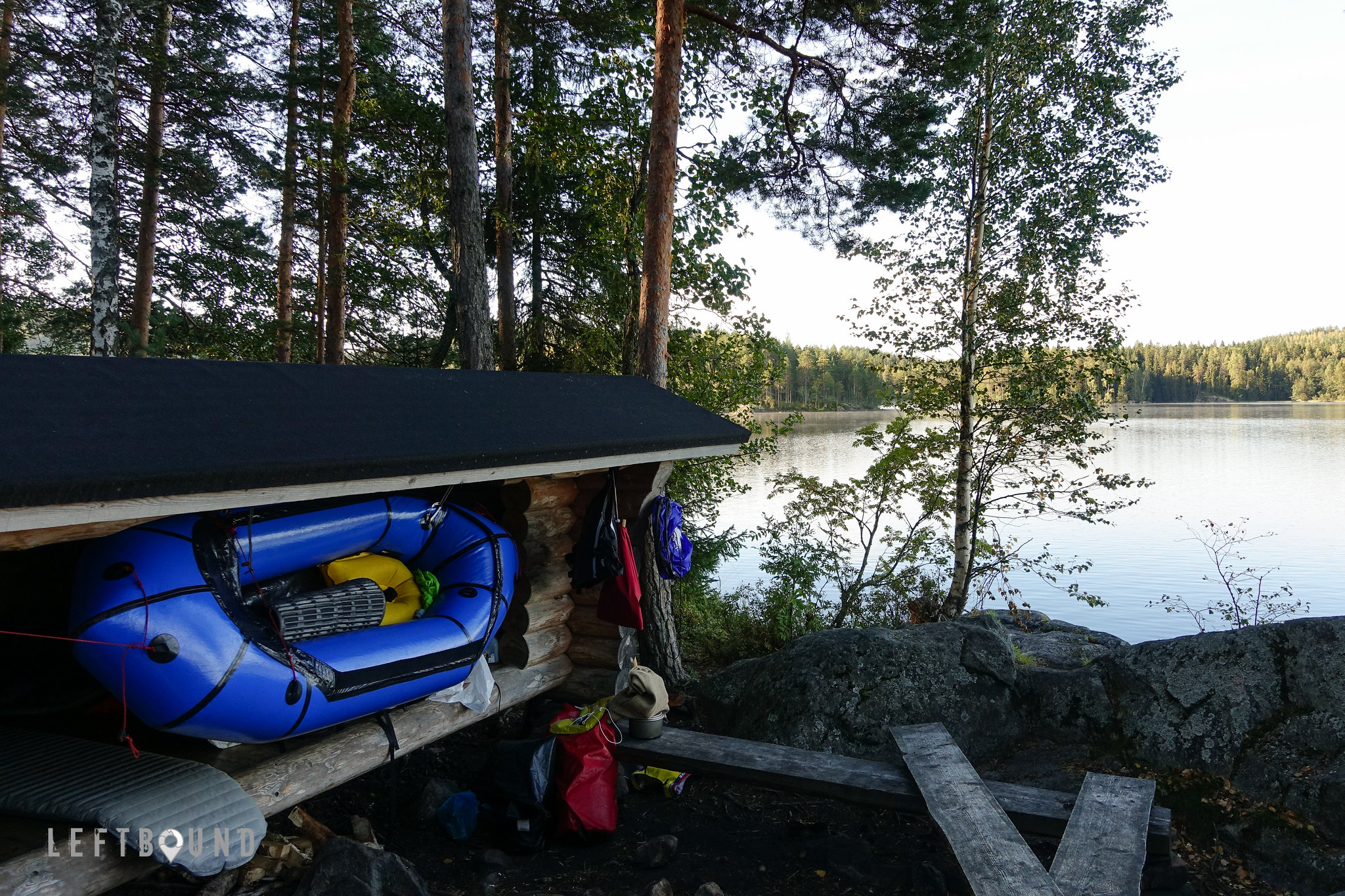 Cowberries were ripe, and were a perfect add-on to the morning porridge. I cannot eat grain, so mine is made of full grain rice which makes a good substitute. I had finished my year-long relaxed project of carving a ‘kuksa’ by hand from a birch gnarl just before the trip, and could now use it for the first time outdoors - coffee tasted even better than usual! 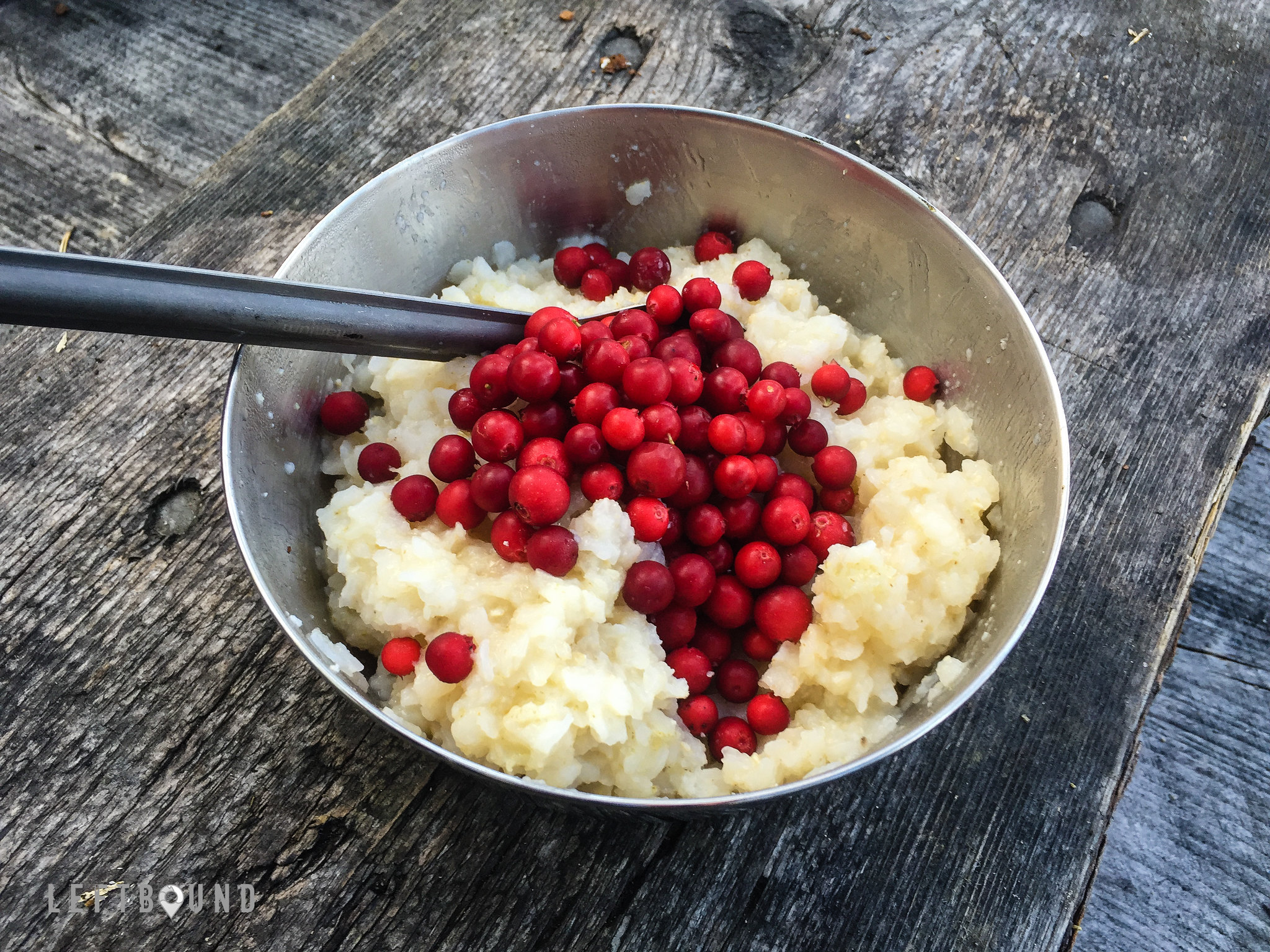 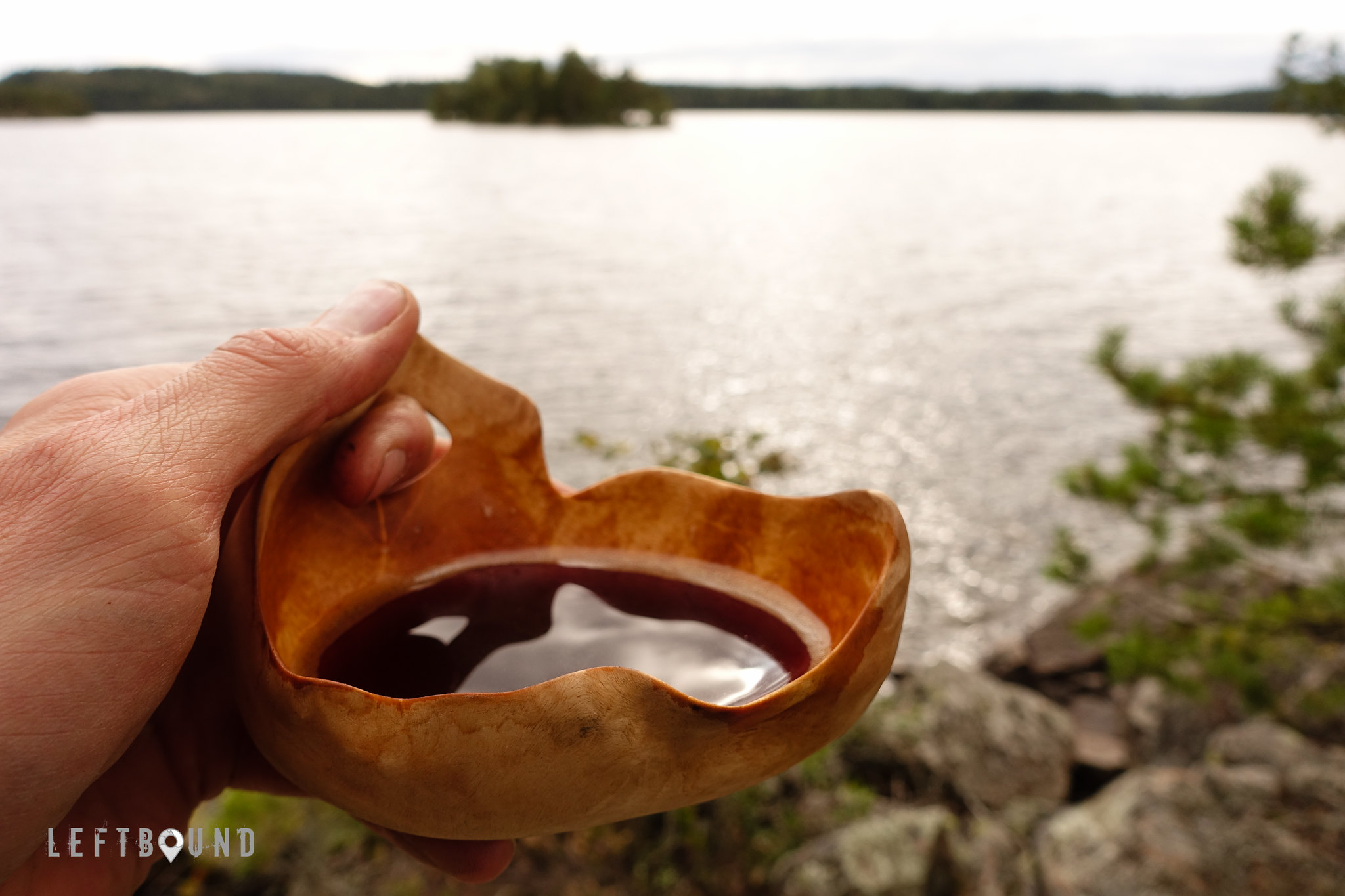 As the wind was present most of the time, I was able to use the sail quite a bit, and also lend it to others to try out, as it’s a neat little tool for any small vessel. I had my keel (leeboard-style, a simple plexiglass board hung on the lee side), so could travel down the wind at an angle, which is useful when touring. Weather stayed clear and despite we got a few drops of rain on the first evening, when landing to our campsite, we got really lucky with the weather - it got downright hot at times during the day, sun blazing, though already at a lower angle. 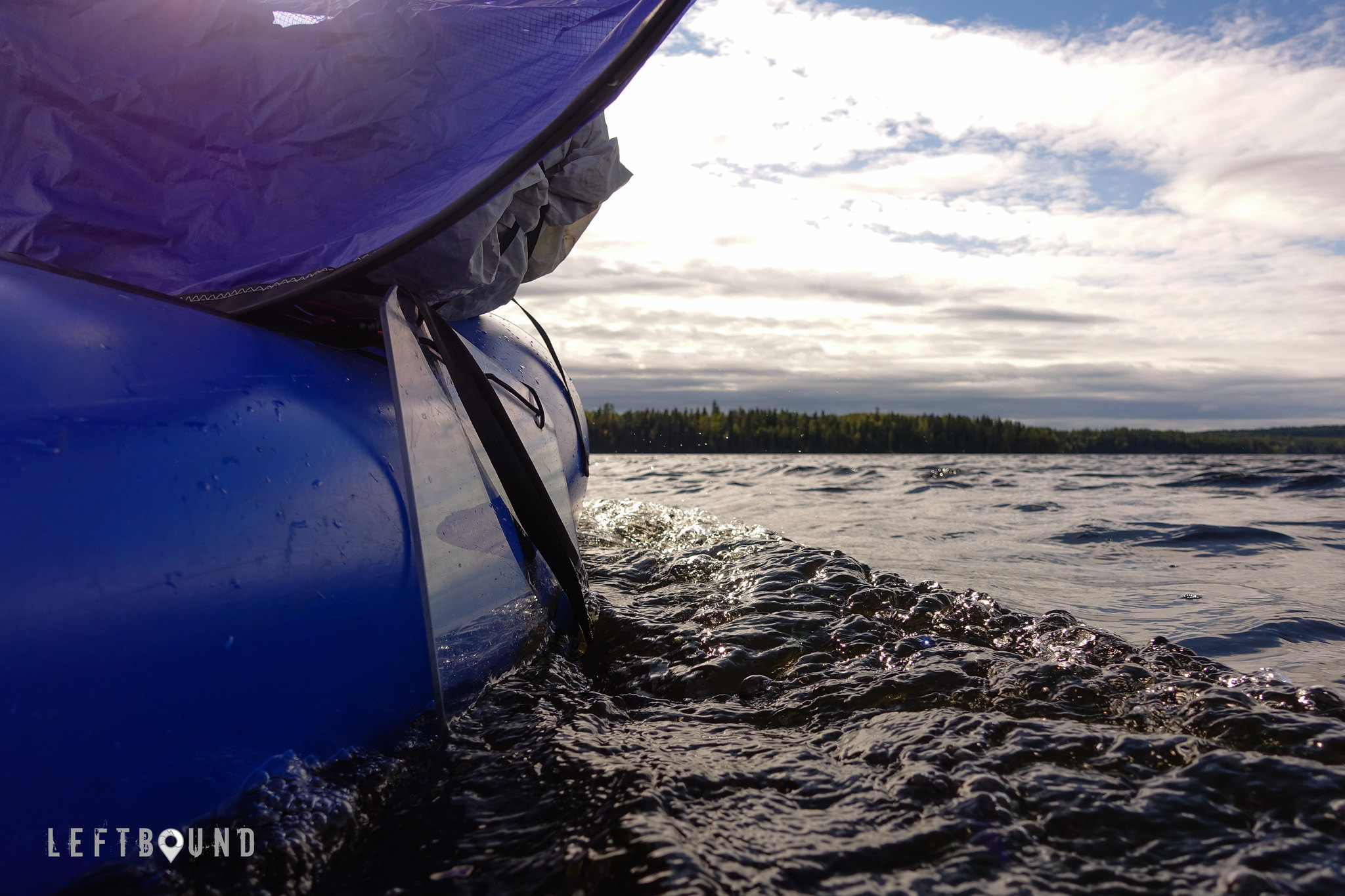 I hope to return some day to explore also the network of trails around the area, but for now, this was a great first visit, and despite the longish drive from Espoo, well worth it. As usual, browse to Luontoon.fi for a map and other details of the area. 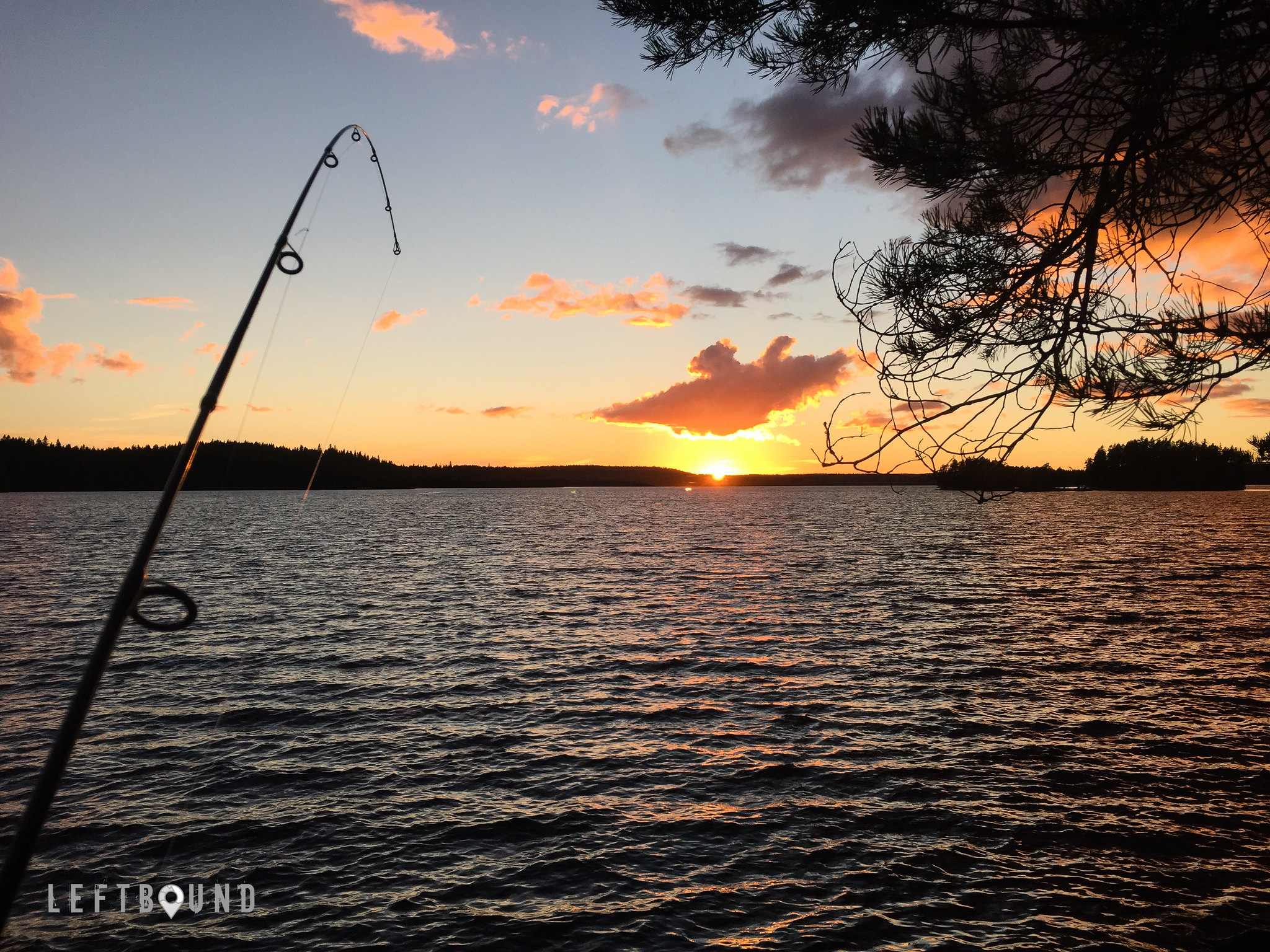