While I prefer open fire over the glow and gentle roar of gas burner, and mostly use my Bush Buddy, there are times when for example a simple personal cooking system (PCS) like the Jetboil stoves, or say, MSR Windboiler or Alpkit BruKit, is more convenient choice. Even during winter, with winter spec’d cartridges and suitable butane/propane mixes, they are a good and clean option. Coldest weather I have used gas in was on a 4-day ski touring in Kebnekaise, Sweden. Back then, we ran a free standing, hosed gas stove with Primus Power Gas (25% propane, 25% isobutane and 50% butane), in around -25 degrees celcius temperatures. Recycling few canisters in and out of our down jackets and having them upside down and on top of the kettle we managed to melt snow and boil all the water we needed at our base camp. Not the most efficient system, and surely a liquid fuel stove would have fared better, had we had one at our disposal at the time. 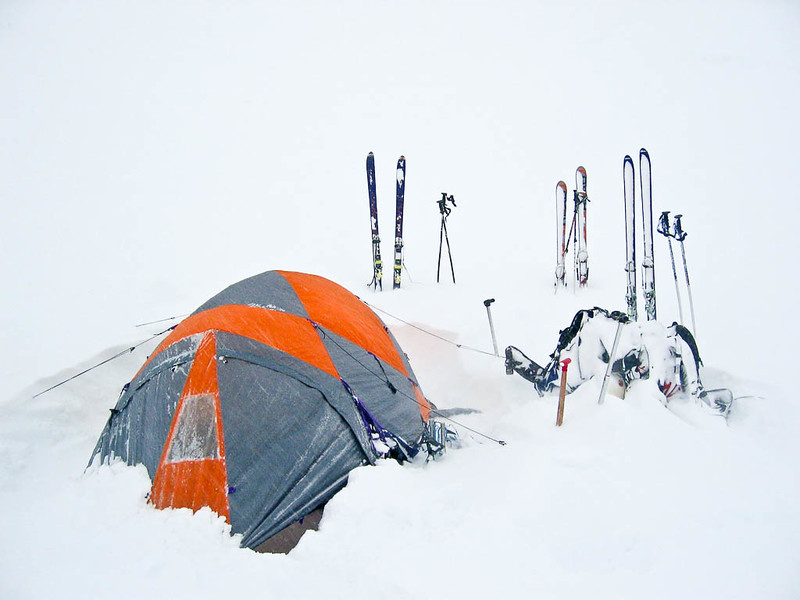 Lately, as far as the gas stoves go, I have been using a tiny, 48-gram titanium canister stove, Monatauk Gnat, which I bought some five years ago. It has been useful until these days especially as a backup for the Bush Buddy, when ‘open’ fire is not feasible. Couple of weeks back, not searching for one in particular, I ran across a great deal for an odd Jetboil Sol (69.90 EUR only). Having tried out some of the early versions and with few friends currently using some other, later models, I jumped on it. The one I got was missing the pot support accessory and neither had the fancy heat indicator on the insulating cozy, neither of which I needed anyway. It does have the updated pietzo igniter and regulator, so it is one of the more recent versions. Sol is apparently EOL with Zip remaining as the smallest volume PCS in their range, but at least XXL in Scandinavia still sells them, for a fair price. 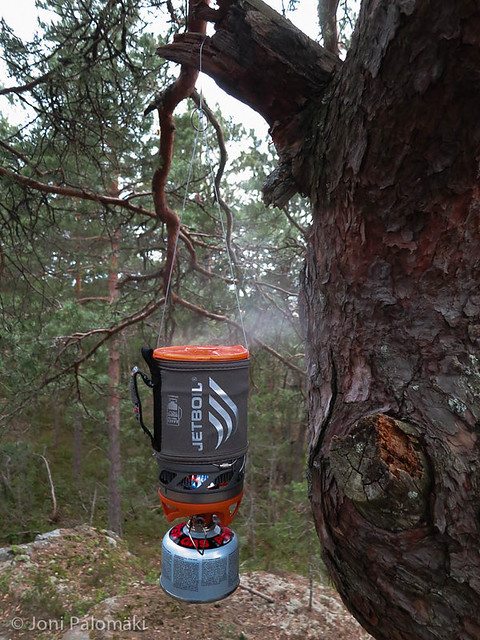 With the new cooking system in the house, I decided I would build a hanging kit for it, to be able to secure the tippy, especially without the included fuel canister stabilizer, system from a tree branch or tent pole if so needed. Jetboil does have hanging kits as an accessory, but I was after something more simple (and cheaper). I had few ideas when walking to the local hardware store to get some thin, 1 mm wire rope and crimps, and once at home, experimenting a bit, I put together a suspension system what I believe is simple yet robust and functional. 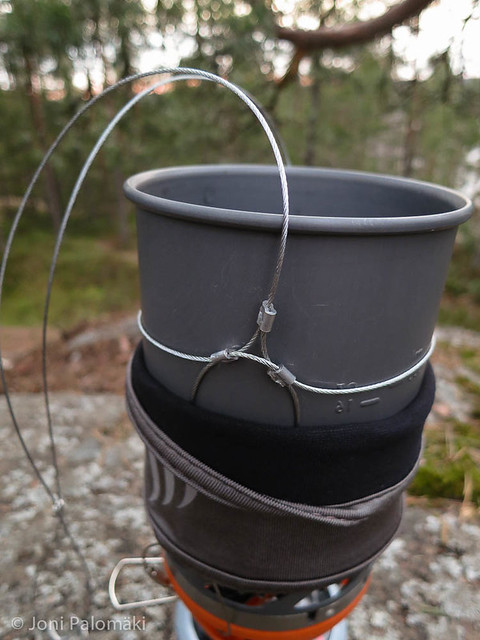 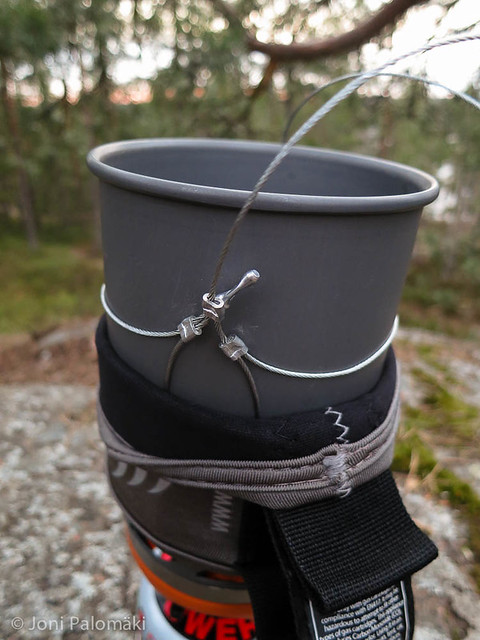 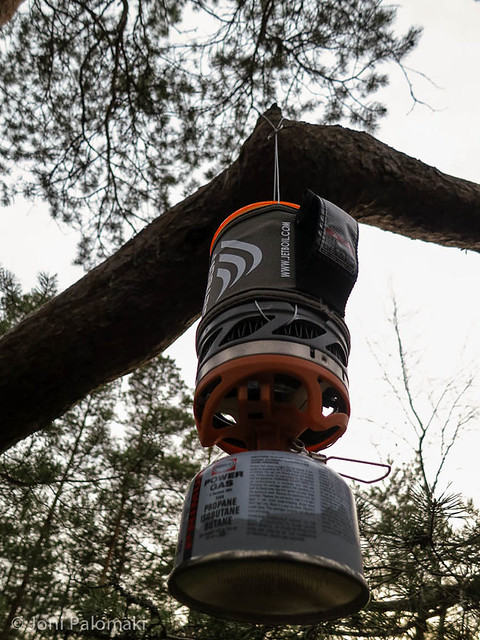 With the insulating cozy, the wire system is mostly hidden from the plain sight, keeping the system clutter-free. I had a threaded wire loop laying around, so I used that as a retainer if dropping the burner while fiddling with the stove would be a problem. 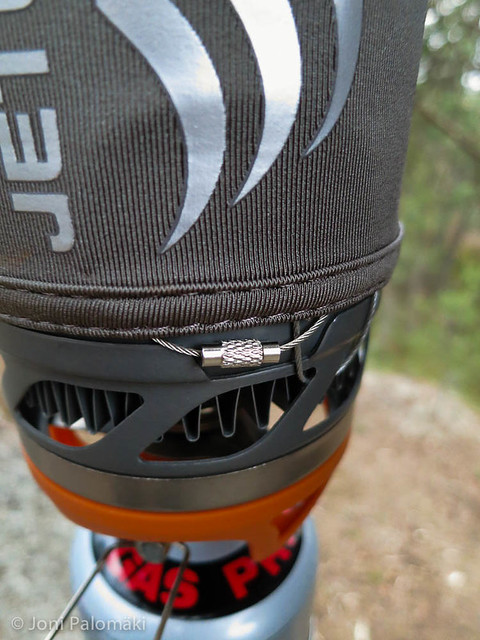 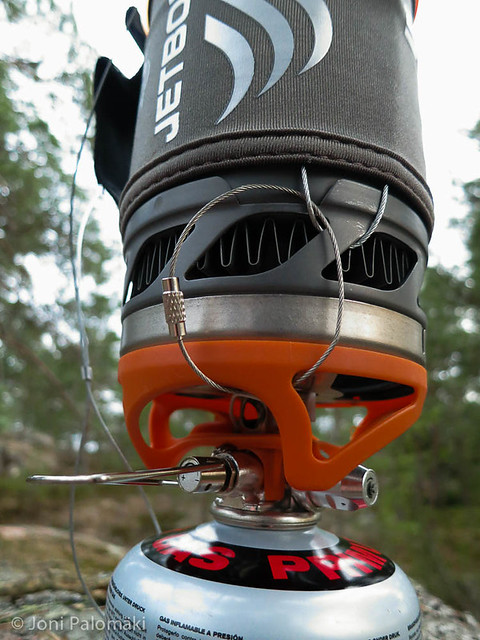 I stress tested the system with roughly 3 kilograms of weight to make sure the crimps especially do not slip under a maximum normal load. With the single loop, suspended from two points only, filling the pot, closing the lid and eventually pouring out the boiling liquid, all while being hung, is a breeze. Also, the pot stays upright even without the cartridge or burner attached, so it is safe for example to change the cartridge while the pot is full of hot water. 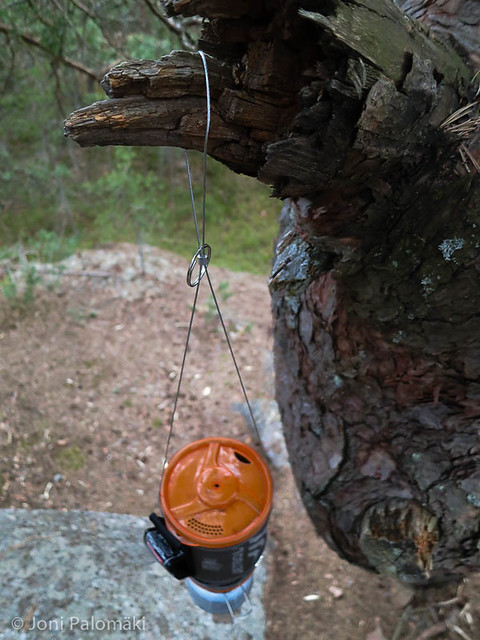 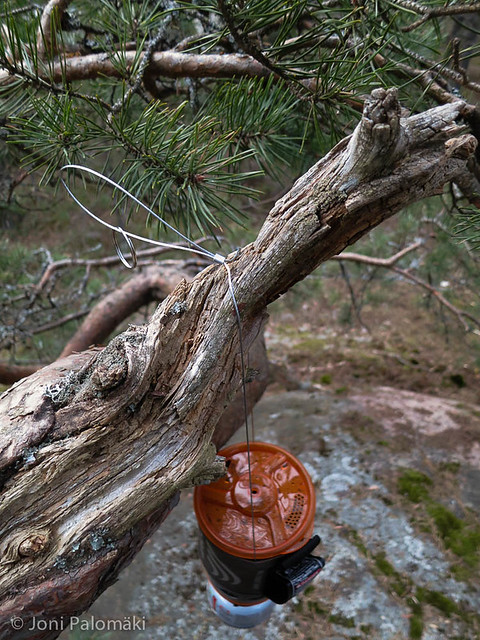 When not needed, the hanging kit can be simply wrapped and stored under the insulating cozy, from where it is easily deployed again. Or, it can be stuffed into the pot as the thin wiring will not interfere with the lid and it closes just fine. As the complete wiring, with the keyring and retainer loop for the burner, weighs a mere 10 grams, making it permanently attached was no brainer. A removable system would have been both heavier and bulkier, adding more possible points of failure. 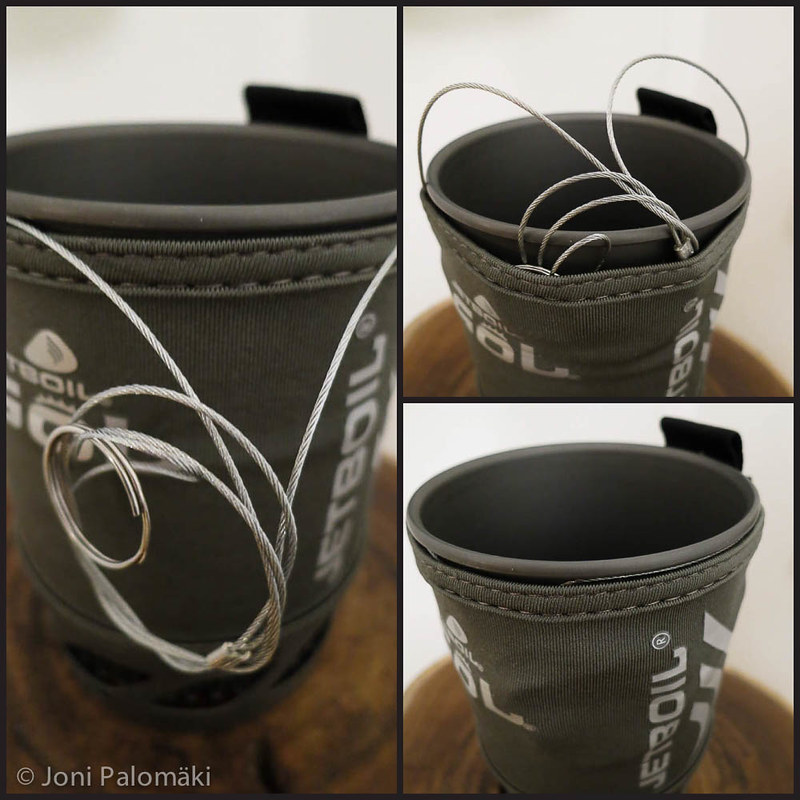 If you have a Jetboil or other similar PCS, and would need to hang it up every now and then, consider rigging something like this. It should be relatively simple to adapt this idea for example into one of the aforementioned competing systems. And as setting this up, at least on a Jetboil Sol, required no modifications to the stove itself, this should not in normal circumstances void the warranty.