When purchasing a fatbike roughly two and a half years ago, one of the goals was to build a rig that could easily be used for mixed terrain bikepacking, year around. Any mountain bike is a great platform already for such endeavors (such as bikerafting up and down a river), but the simplicity of a solid, non-suspended frame helps to tackle a heavy payload, and fat tires give a clear edge on varied terrain. 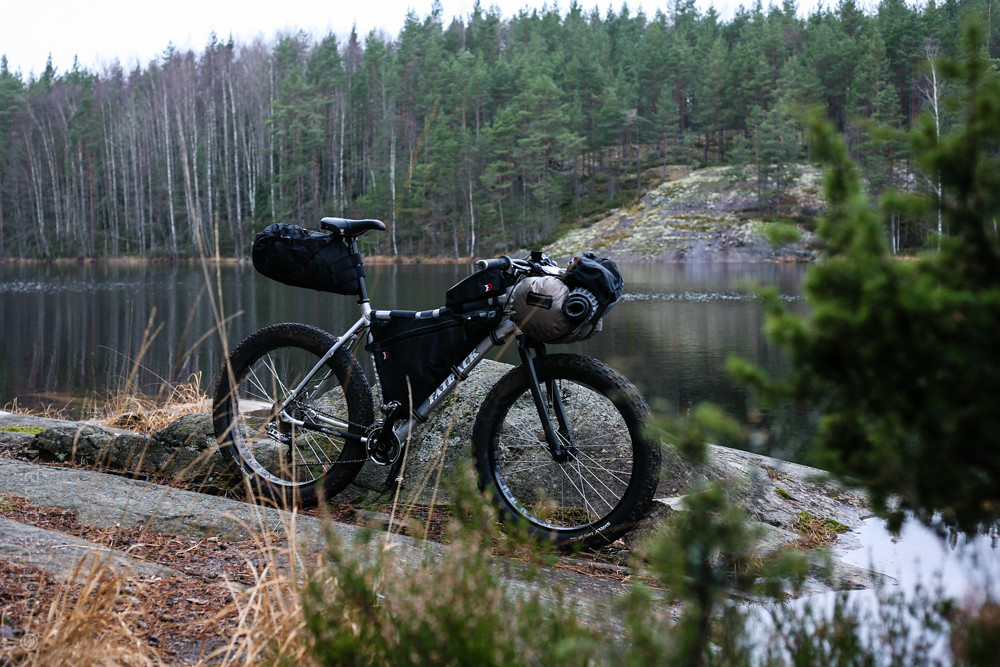 Picking components for my Fatback build, I ran across bike bags from Revelate Designs, a company that specializes in bikepacking gear. Speedway Cycles, through which my order was fulfilled, had a custom-sized frame bag for my 22" frame, and so with the bike build, arrived also a frame bag. While I was first contemplating whether I should only use the bag when going out on a trip, I strapped it on once the bike was finished, and by the date it has not left the frame, even for a day. I never liked wearing a backpack (even those small water bladder bags) while cycling, and it was a revelation to realize that with a frame bag, the days of carrying one on every ride were over - water, snacks, repair kit, camera and much more would now easily travel inside the triangle. 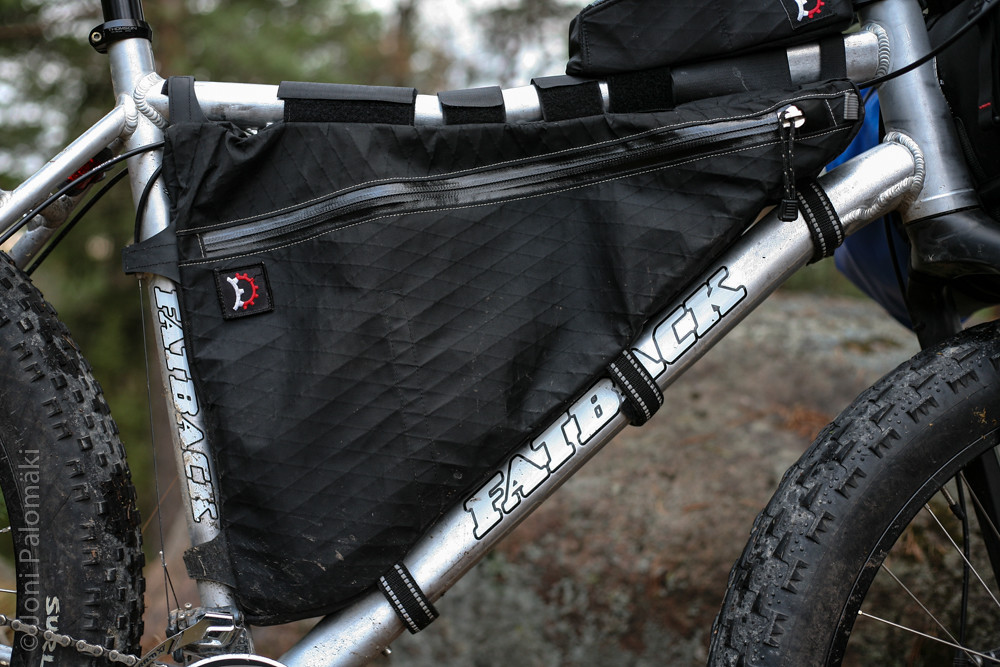 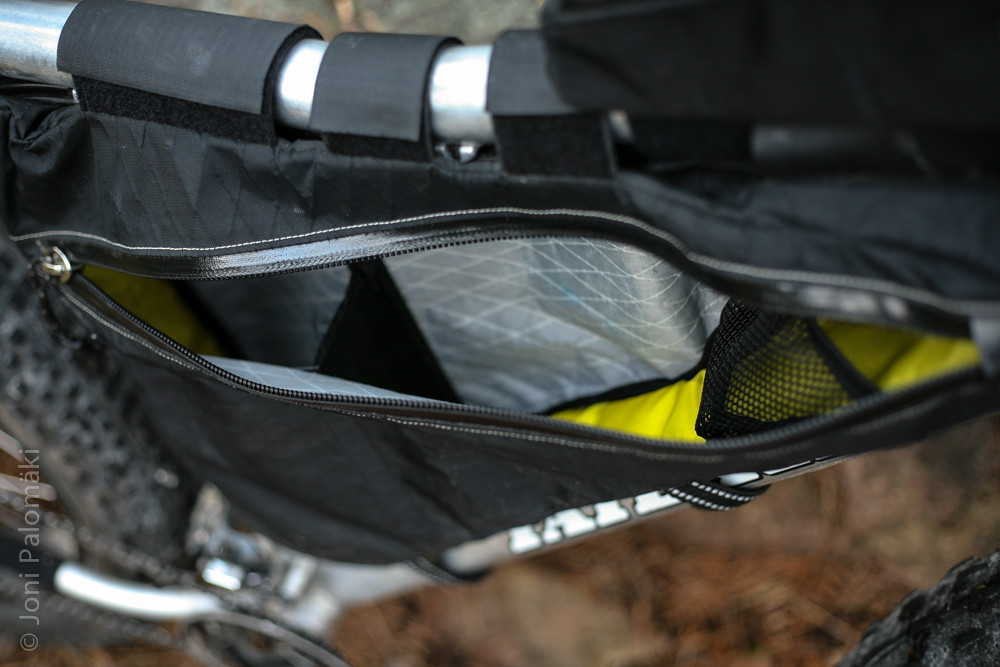 Couple of months later, while letting go of my full suspension bike which had been slipping into oblivion, I looked into putting some of that cash back to cycling, and got the Viscacha seat bag and a Gas Tank. Seat bag allowed loading a lot more gear on the bike, and lose the backpack also on overnighters. I continued to strap a dry bag (or a rolled up packraft) on the handlebar, while the gas tank offered convenient access to small items needed frequently. This worked nicely well into 2013, when Revelate Designs started to develop a new harness for carrying bulky items more securely on the handle bar. Released and in stock around May, I grabbed one, completing the set. 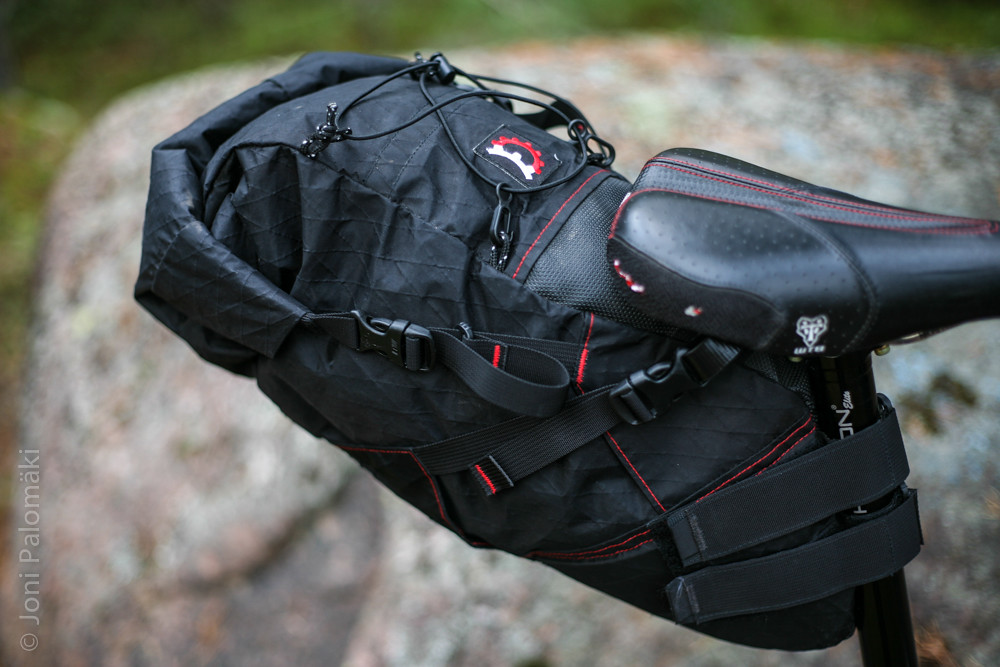 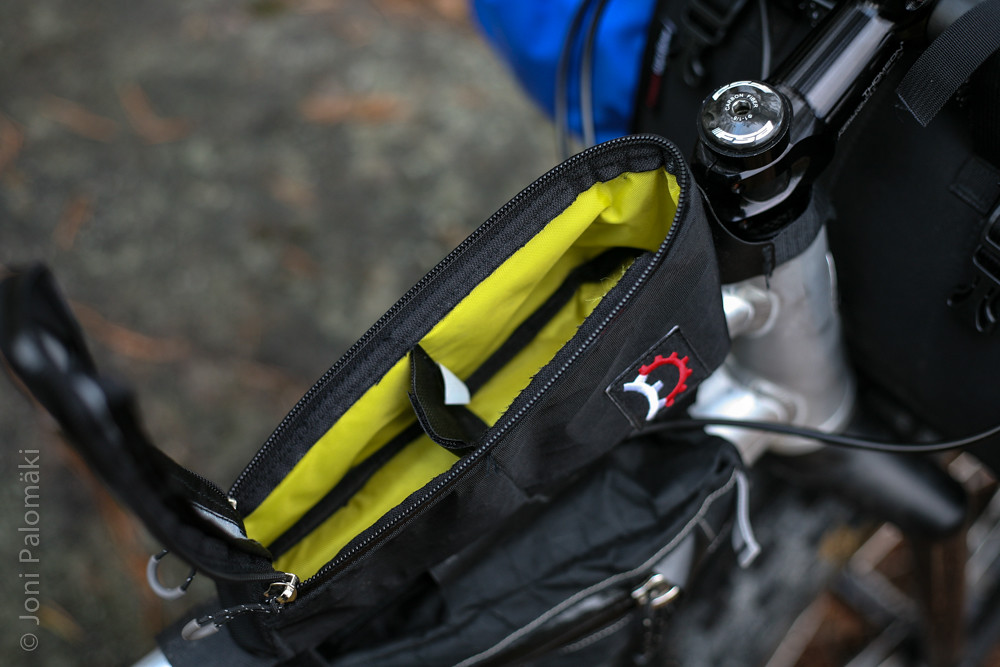 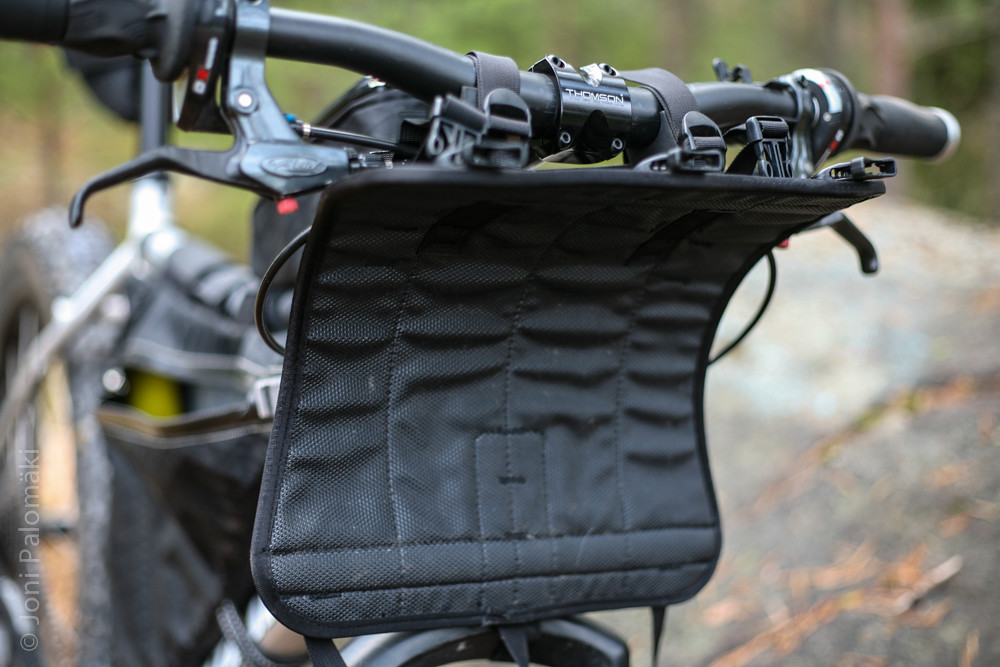 Frame bag has aged well, showing no signs of fatigue, with all straps and seams intact. There is minor wear on the seal of the water resistant zipper, with a thin strip having peeled off in use. Typical for such zippers under high stress, I am not alarmed by it, nor do I feel it really compromizes the protection from the elements. Gas tank has the same type of seal on the zipper, and so far shows no signs of wear, being under less stress. 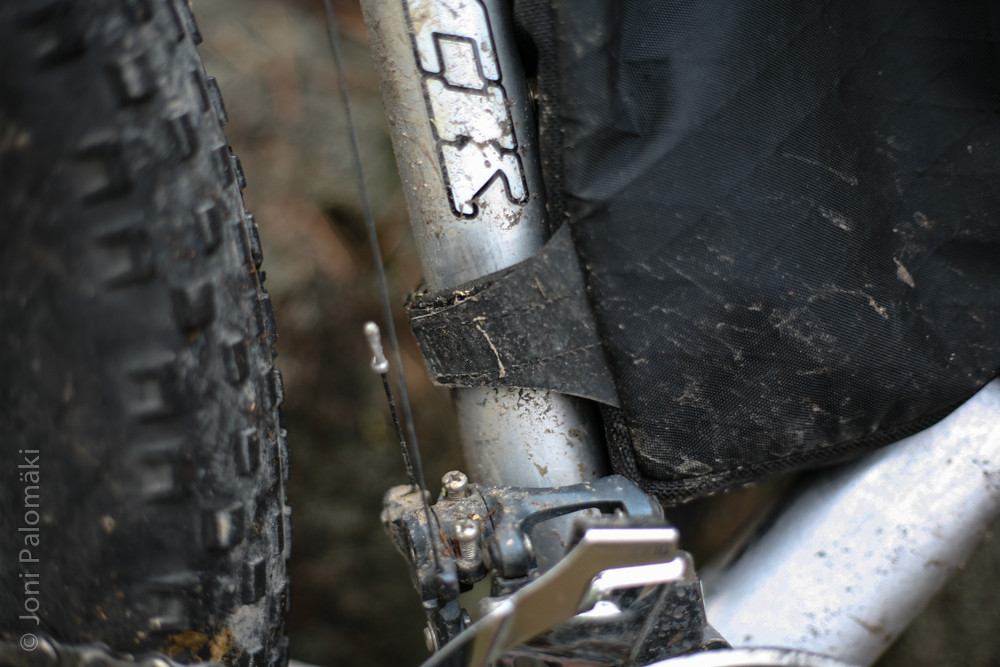 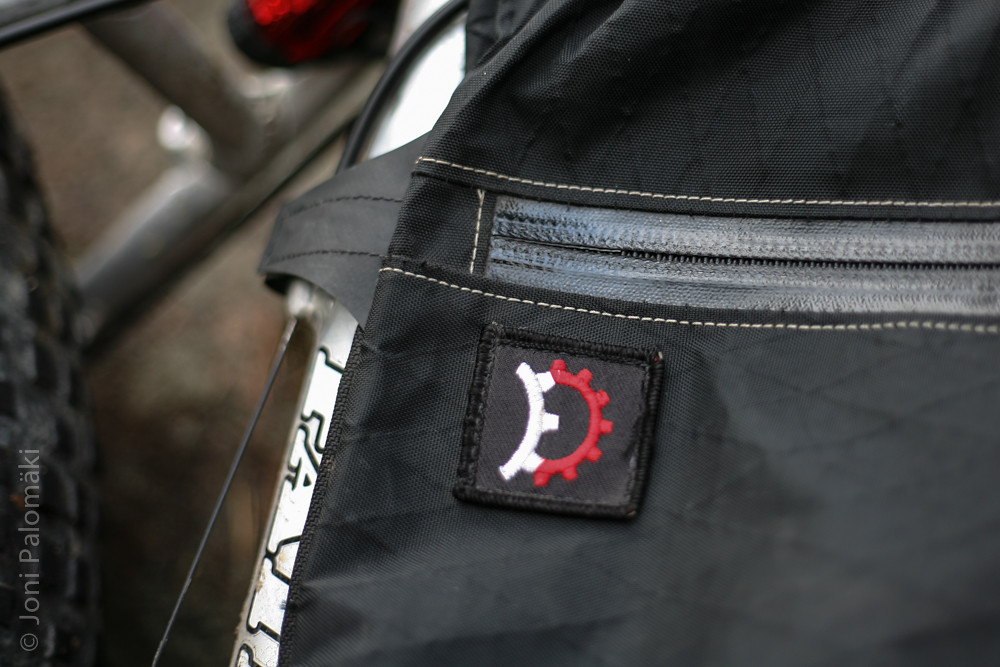 Seat bag has changed a bit since I got mine, now including only one velcro strap around the seat post, and few other minor adjustments. Functionally it’s still the same as far as I can see, and comparing the two online, I can spot an essential, though minor, change - the plastic eyelets on the top for a bungee cord. In my version, there is simply 4 cord loops sewn into the seams, and routing a bungee cord through them can easily cut in them in use. I could notice some slight wear on mine early on, and added a piece of cord and some plastic snap hooks to take away the strain - this works well and no further wear is evident so far. 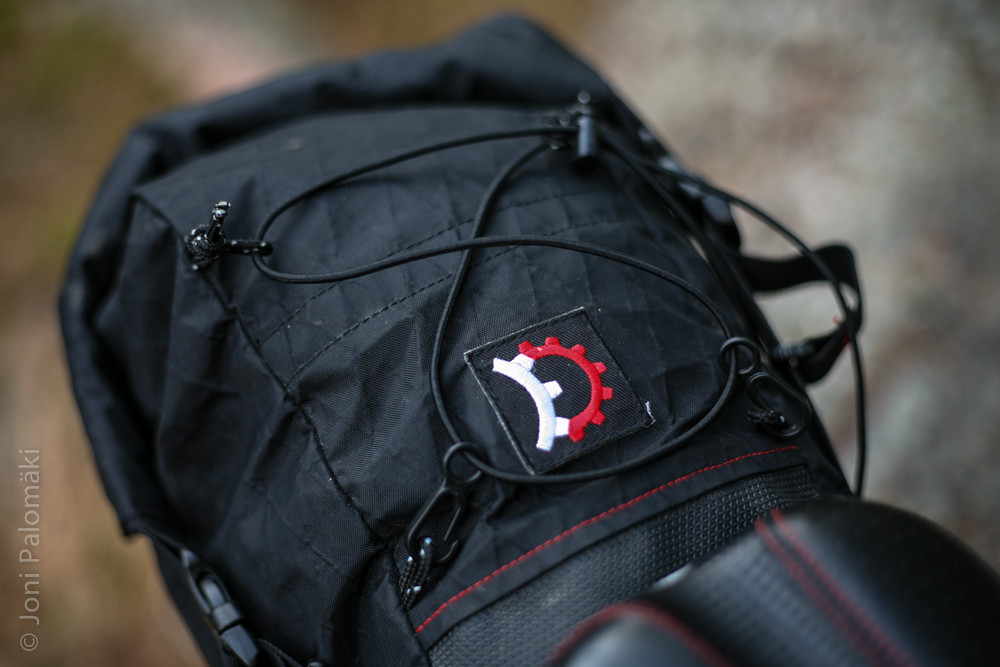 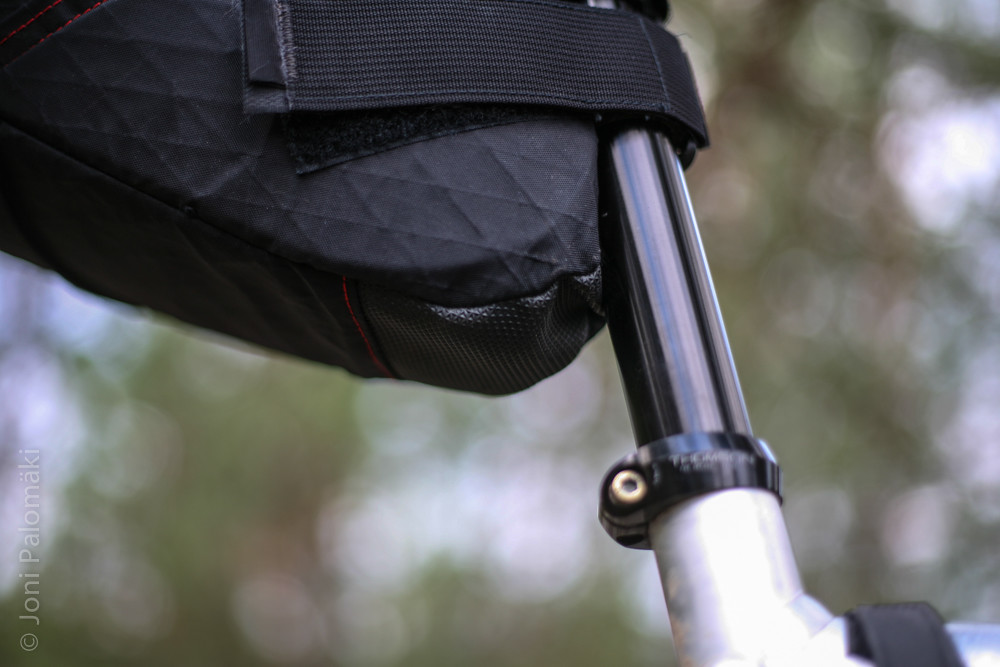 The new seat bag also sports adjustable position for the seat rail straps, which can be useful for fitting the bag in different bikes (and for example for setback seat posts). Despite the repetitive use (on and off the bike, load and unload) there is no visible wear or tear on the seams, nor do the straps or the fabric show any alarming signs of use. Internal (removable) compression strap is handy, and the roll down closure allows easy volume adjustment (removable plastic bottom sheet provides structural support). 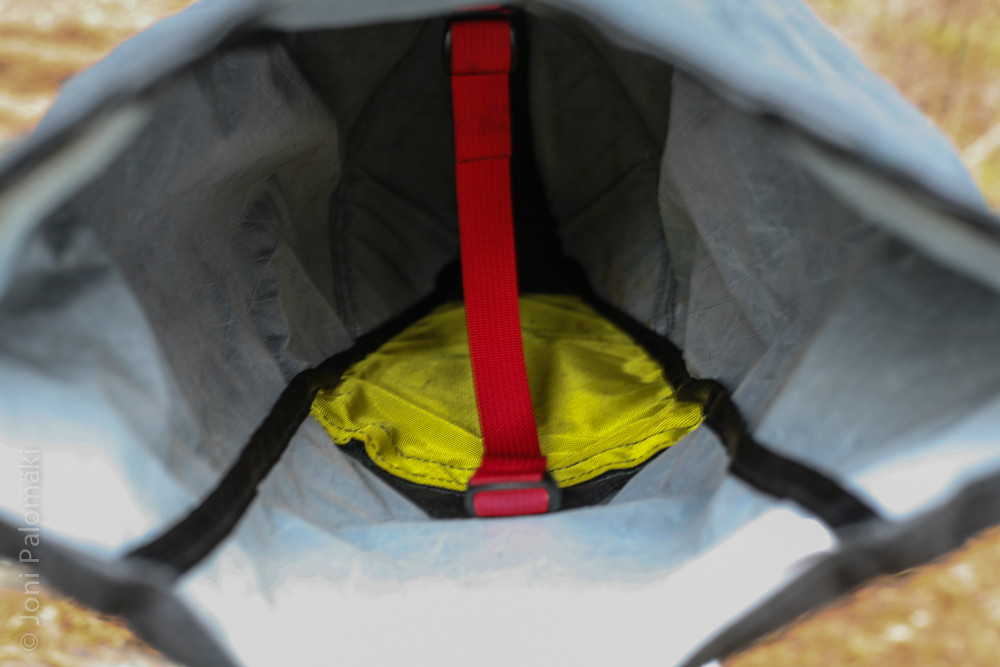 Harness is an interesting piece of gear. When I first received it, it felt a bit overbuilt and heavy, after being used to strap things (mainly a dry bag with gear, or the packraft) directly into the handle bar and it working just fine. Somewhat complex to attach to a busy handle bar, it takes some time to do. However, when tuned up for the bike, and in use, I quickly realized the benefits of the sturdiness, and having shifted cargo up to its load carrying capacity, would not take anything less. 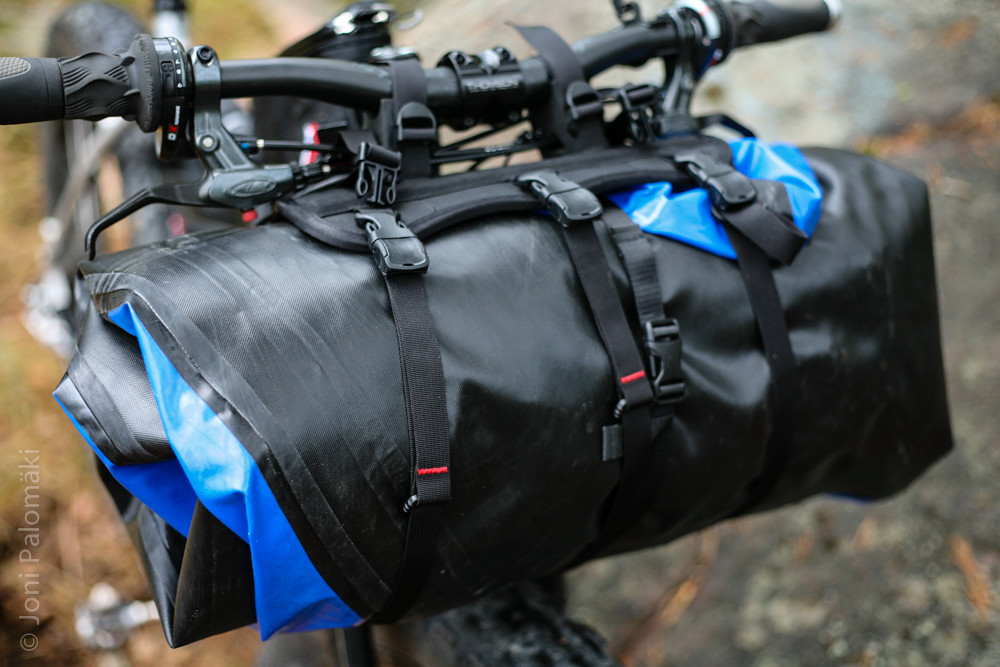 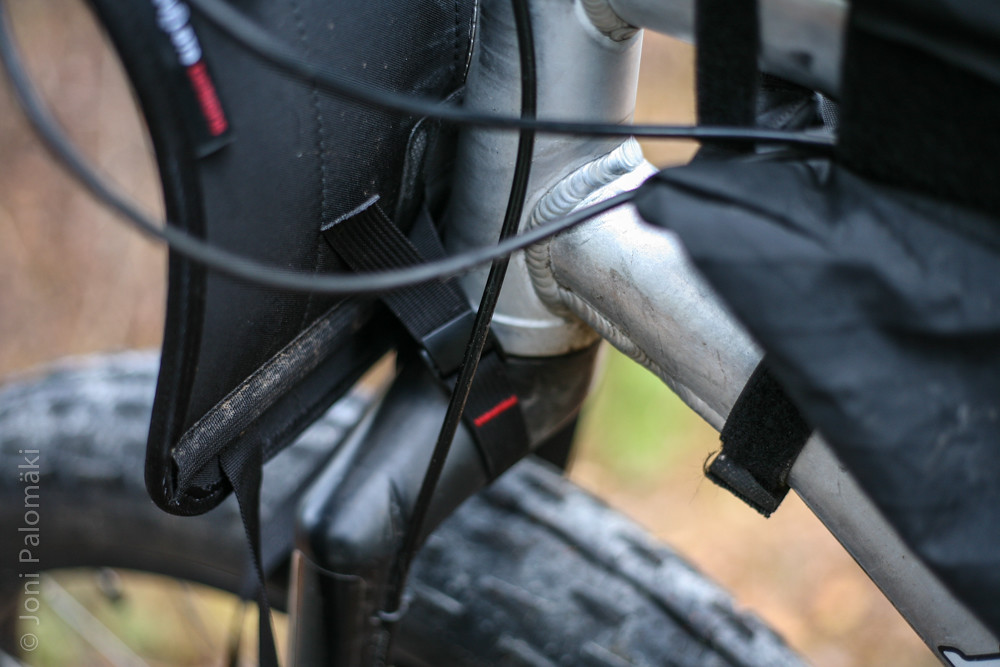 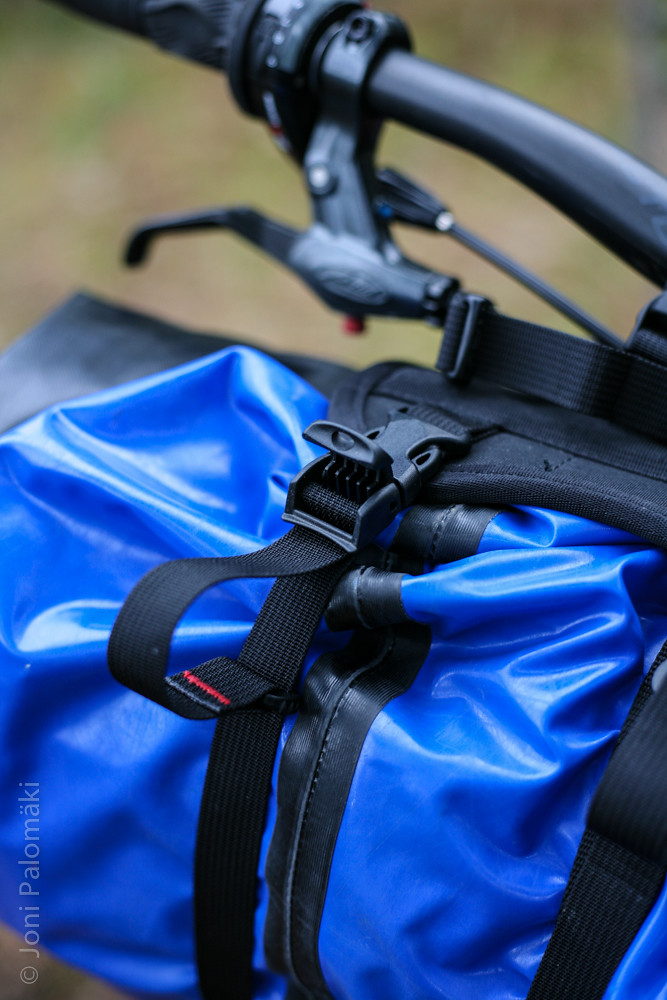 Harness comes with two rubber spacer blocks, that allow some distance to the bar, making it easier to route the cables. For me, having two shifters and four cables running from the bar ends, I ended up pulling the blocks loose from the harness (and connecting them with runaway straps to not to loose them accidentally), allowing me to route cables through the cut outs on the front-end of said blocks, resulting to snag free cable routing and the correct alignment of the harness. To prevent the payload from jumping up and down with the harness, a third strap around the head tube, or better, around the fork crown, is used. Some minor abrasion is visible where the harness touches the head tube, but materials used all around are very sturdy and abrasion resistant. 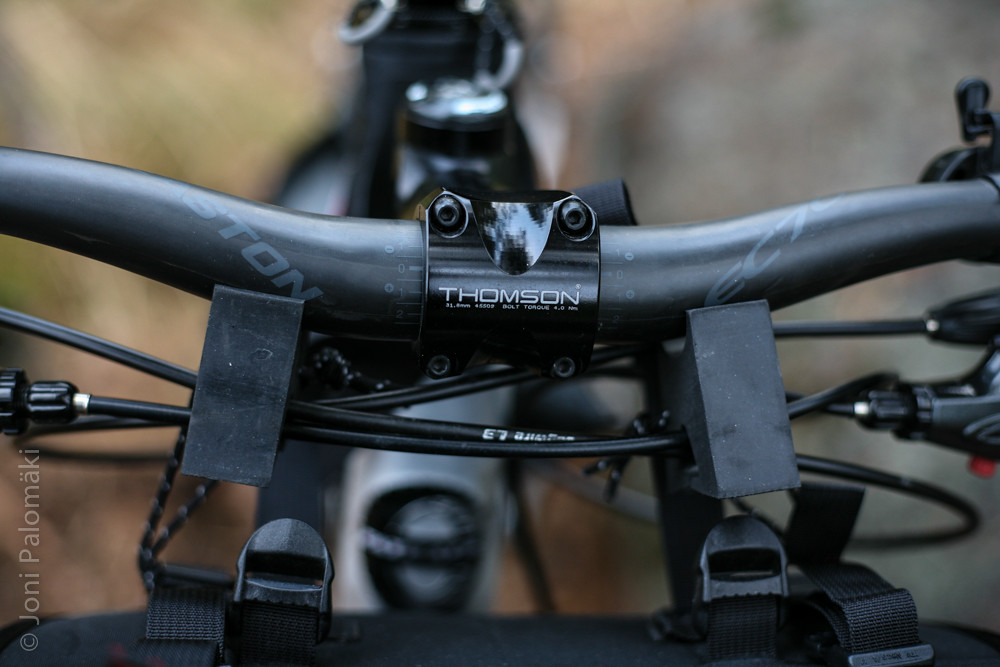 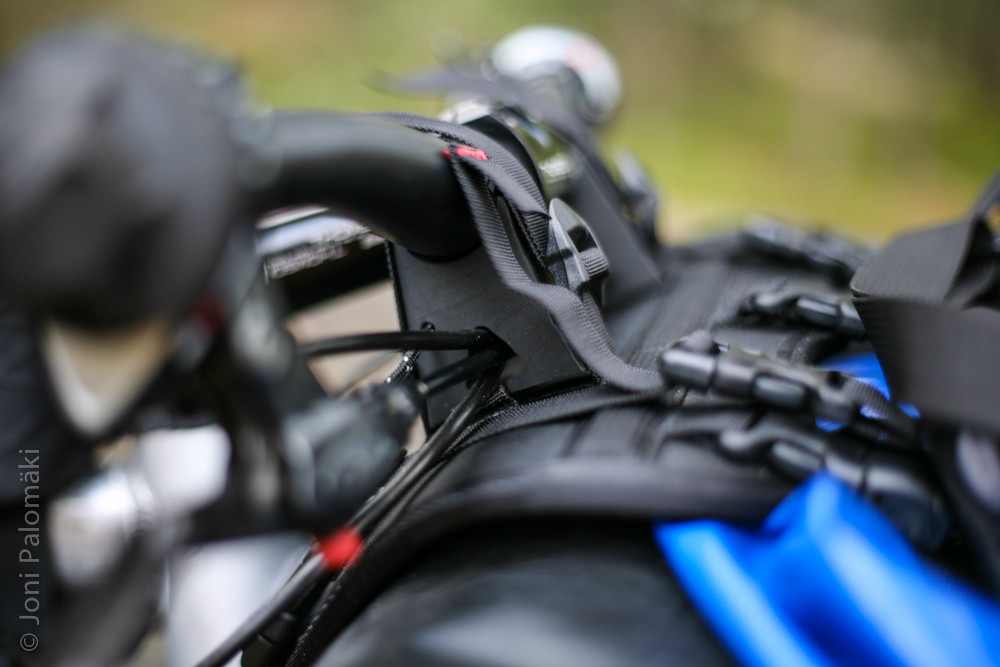 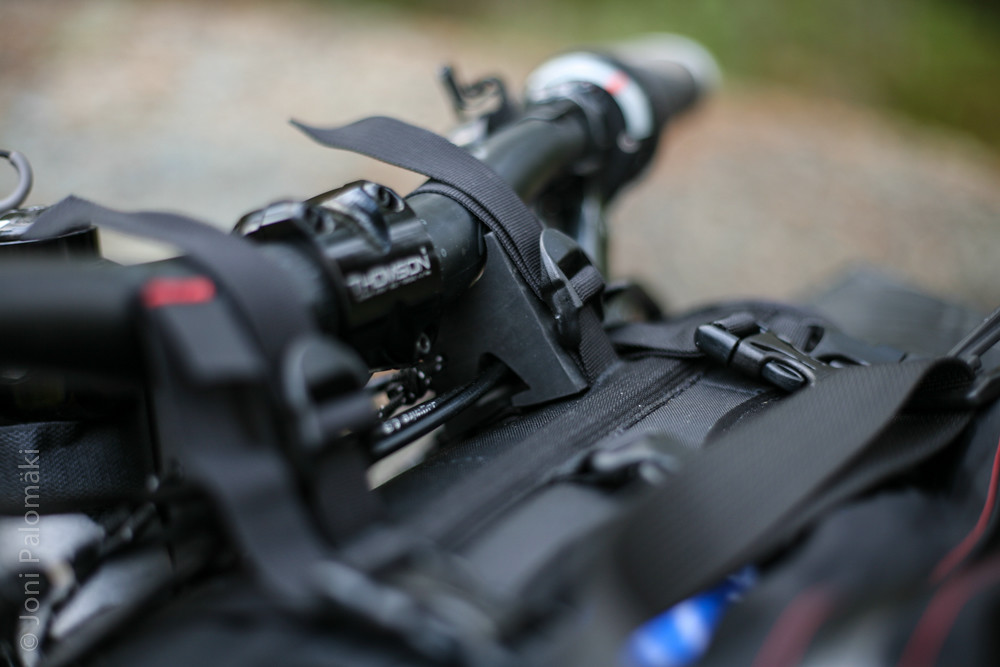 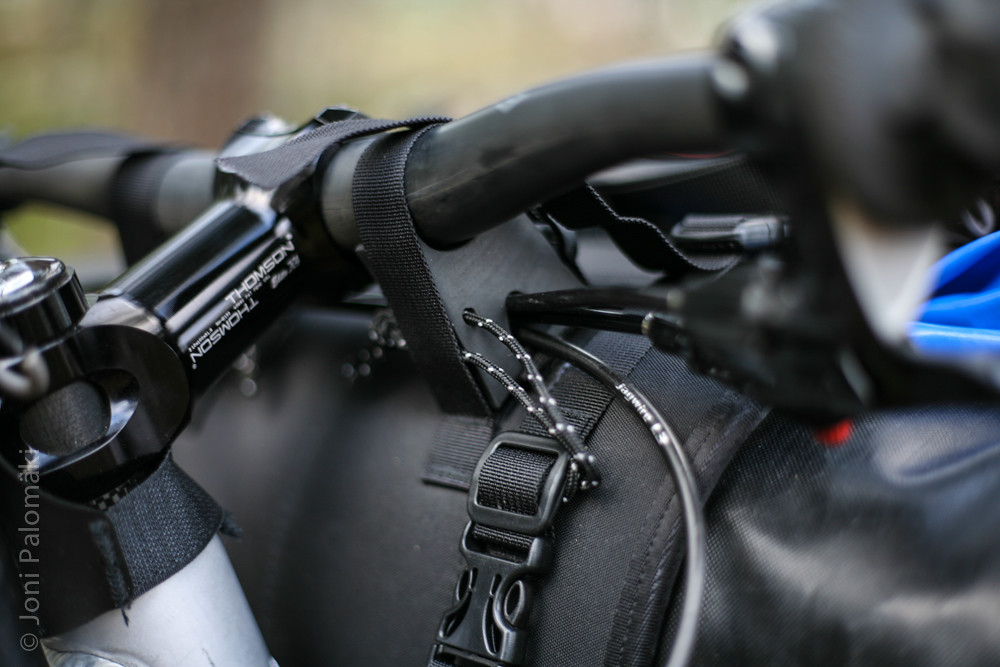 Latest addition to my set of bike bags is the large, harness compatible Pocket (large) I got this autumn, and used it first time last weekend. As it clips in to the harness (which ships with the required hardware), it’s simple to take into use. I hoped to use it especially for storing camera gear, even DSLR, and other small items, and was happy to confirm it fits a big camera and much more. And as it turned out, it easily converts also into a shoulder bag. 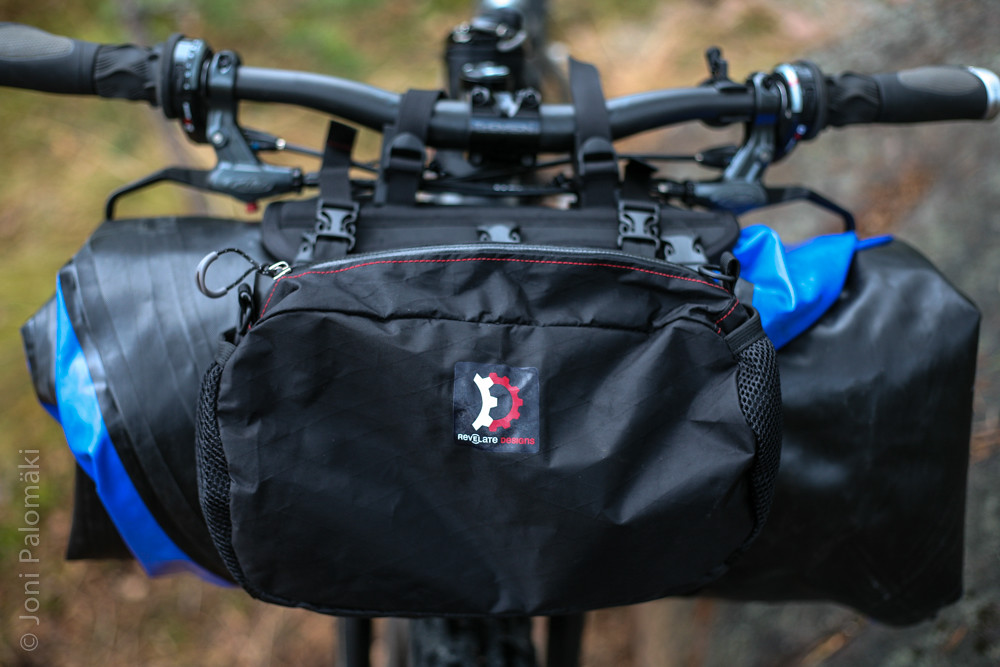 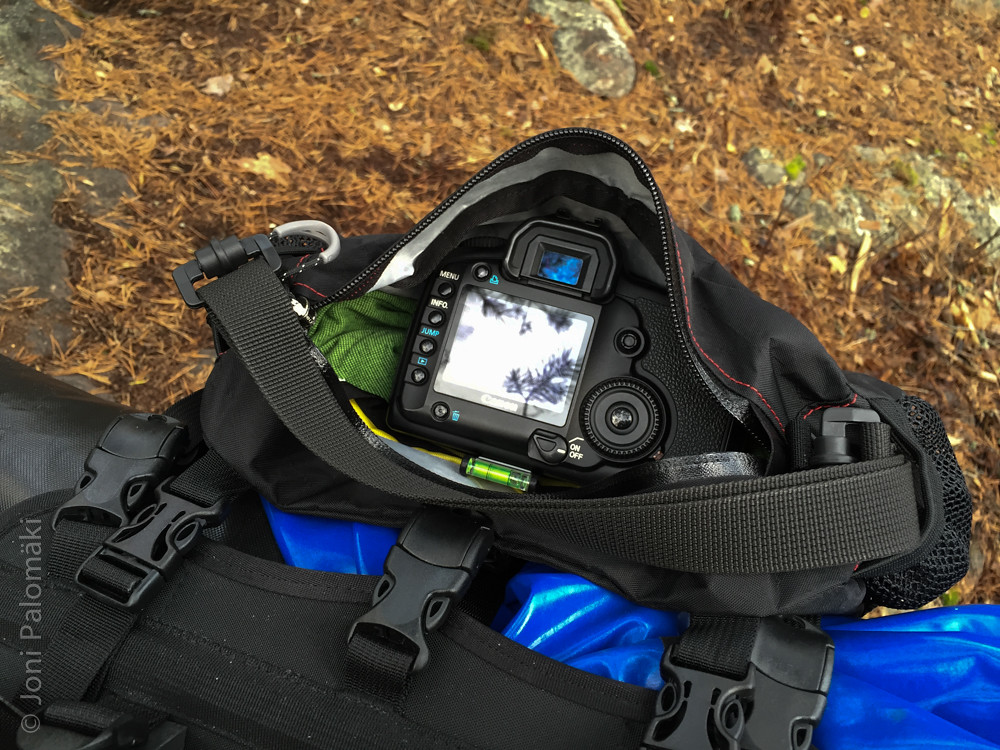 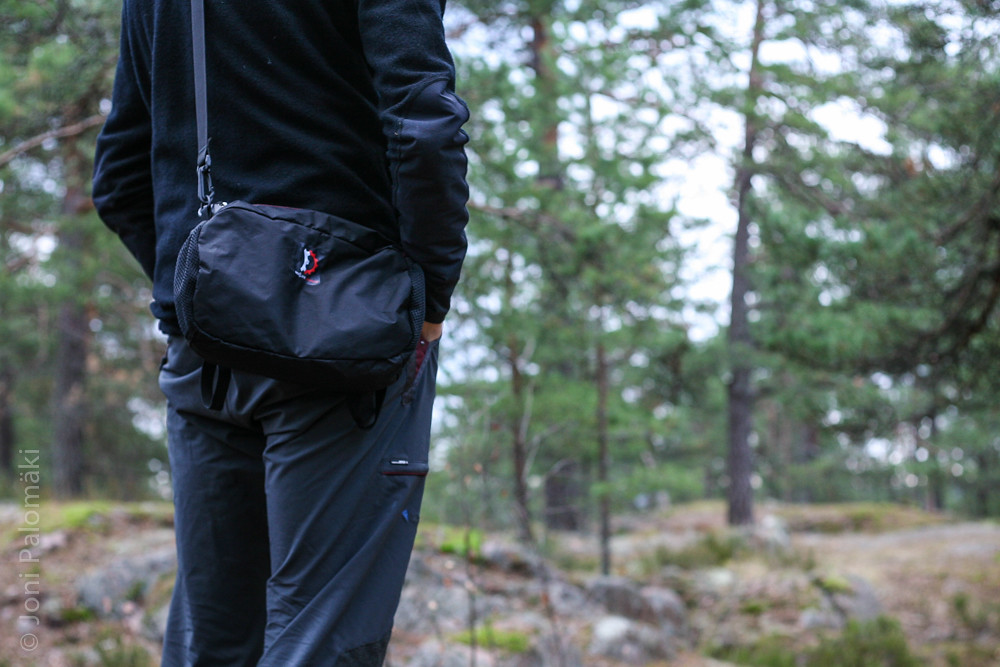 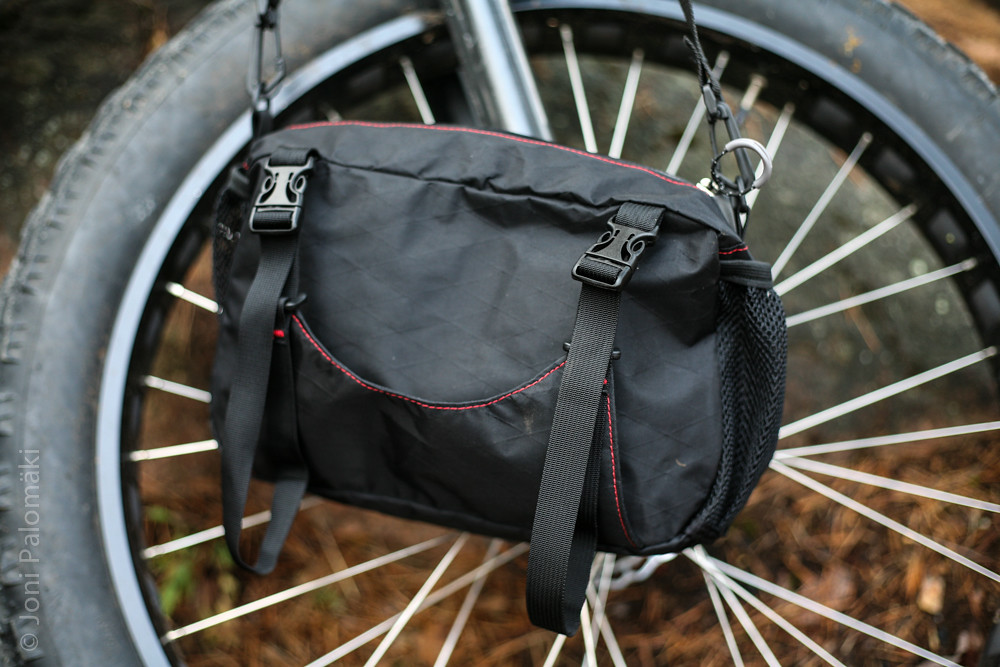 All in all, I am very satisfied with the quality of Revelate Designs bags, and, expecting no failures any time soon, hope to use this set for years to come. If you are after a high quality bikepacking kit, gear from Revelate Designs is definitely worth a look. As with anything strapped to the frame, beware of the scuff marks (if you care about those, I don’t) appearing quickly, stripping off the paint or the anodization - if a concern, you can try protecting the frame with some sort of protective film or tape.

You can order these bags directly from US, and in Europe they are available for example through Backcountry Biking in UK, Fatbikes.at in Austria and Singlespeed Central in Netherlands. In Finland, you might first want to check what Shock Therapy has in stock. If you want a second opinion on these bags, check out for example Tramplite’s review. Post a comment or a question below if you have some experience with these bags, or need some further details. Current specs are best obtained from Revelate Designs themselves.