After a disappointing winter, it’s great to see the spring coming, and especially waters opening up for packrafting - though lakes and even the sea is still partially covered with ice, temperatures dropping few degrees celcius below zero during the nights.

To kick off the season (traditionally even), I had a quick after-work paddle last week in my backyard river, Espoonjoki, which has enough water only during the spring and autumn floods for rewarding paddling. Espoonjoki (starting from Espoon tuomiokirkko) is mostly uneventful, but with decent discharge it’s a comfy paddle with a short rapid in Kauklahti to spice things up a bit. This time I continued from Kauklahti all the way to the sea, by then mostly thawed, and finished near home in Saunalahti. 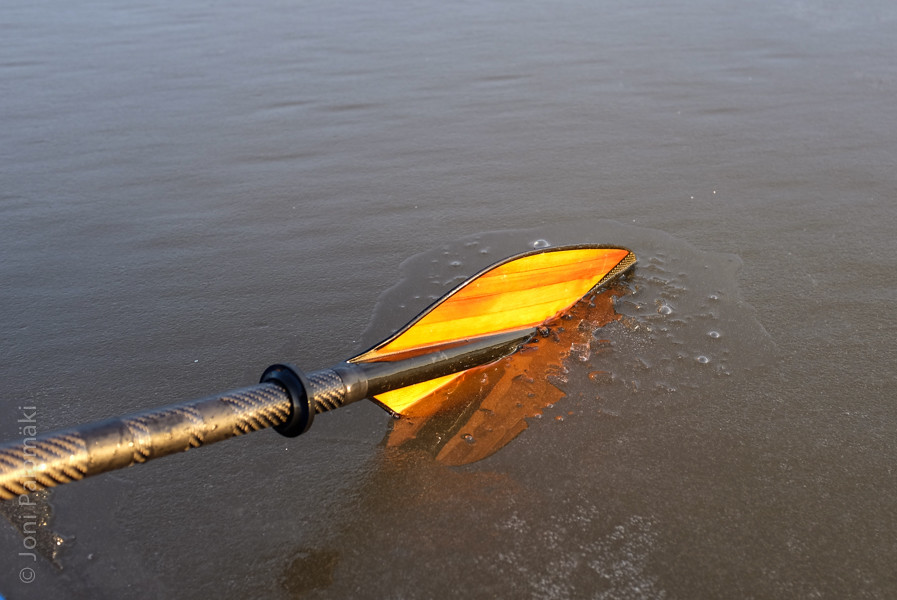 As it happened Marko had a similar idea on the exact same day, and we ended up running down the same river only few kilometers apart, unaware of one another’s presense. Sharing another objective for spring flood paddling, Siuntionjoki, a proper plan was formed for the following weekend, Marko quickly fixing the rough route, and by the end of the week we were on a train towards Siuntio, straight after work.

The idea was to start from Siuntio and make way upstream some 12 kilometers, paddling and hiking, to the starting point nearby Sågars fors. For the future reference, discharge was as follows (from Ympäristökeskus):

Unpacking rafts at a pier on the backyard of a friendly local, we kicked off a kilometer downstream from lake Tjusträsk, which was the first question mark on the planned route. Being early spring, we knew that the lake would be at least partially frozen, but hoped to find a way in and out, or around. Arriving to the lake, closed in with ice, we regretted leaving the ice claws behind at the last minute, but decided to give it a try and get on the solid ice and across the lake. With trial and error of agile (yet not always graceful) moves and maneuvers we made it on the top, and five or so meters from the edge the ice was already solid enough (though bendy) to stand on, with no water flooding on top. Pulling the packrafts behind, we strolled across the lake observing any hollow spots and changing ice underneath our feet. Reaching the other end of the ice cover without incidents, another series of moves was performed to successfully slid back to the open water. 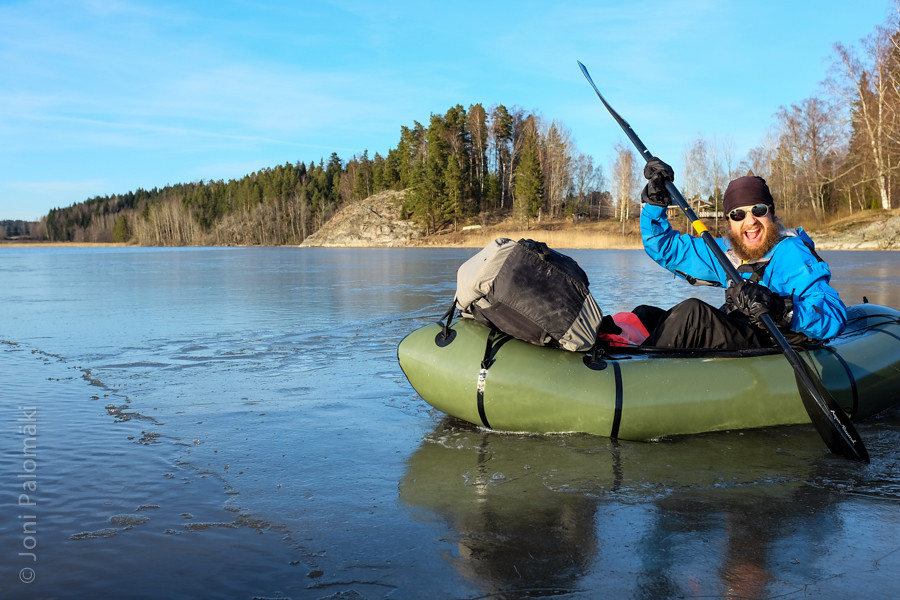 Entering the river again, we could feel some resistance from the current, but continued a kilometer and a half, before finding a good spot to go ashore, and start our next leg on dry land. Crossing fields and few roads, we were soon in the forest, and aimed on the high ground along the river, with mild bushwhacking and crossing few frozen tributaries feeding to our target river. 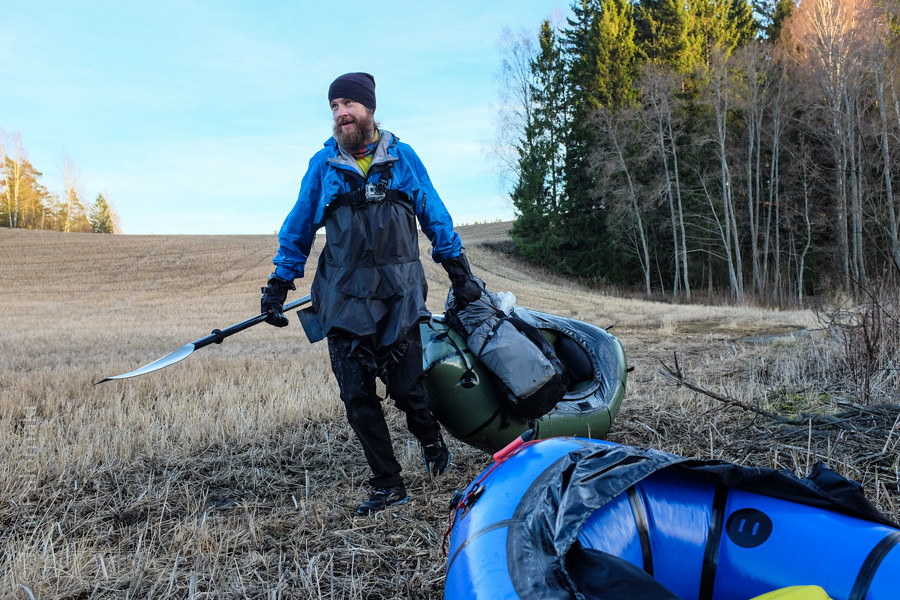 Finally the darkness fell, so we pulled out the headlamps while temperature dropped few degrees celcius below zero, and continued with heavier bushwhacking through the thickening forest. We had initially planned to camp somewhere on the high ground downstream of Sågars fors, but reaching it we decided to continue a bit further and after stopping by the old mill of Myllykylä, we found ourselves a kilometer more upstream, high up on a cliff. Looking over the river it was a perfect spot for the night.

Small campfire around Bushbuddy fed us with freeze dried meals and sausages, perfected with a dram of whisky while stargazing. With the early start in mind, we hit the sack shortly past midnight, Marko crawling under the tarp while I snaked myself into the bivy. Night was cool at -6 degrees celcius, but I was comfortable in my 4-season sleeping bag. 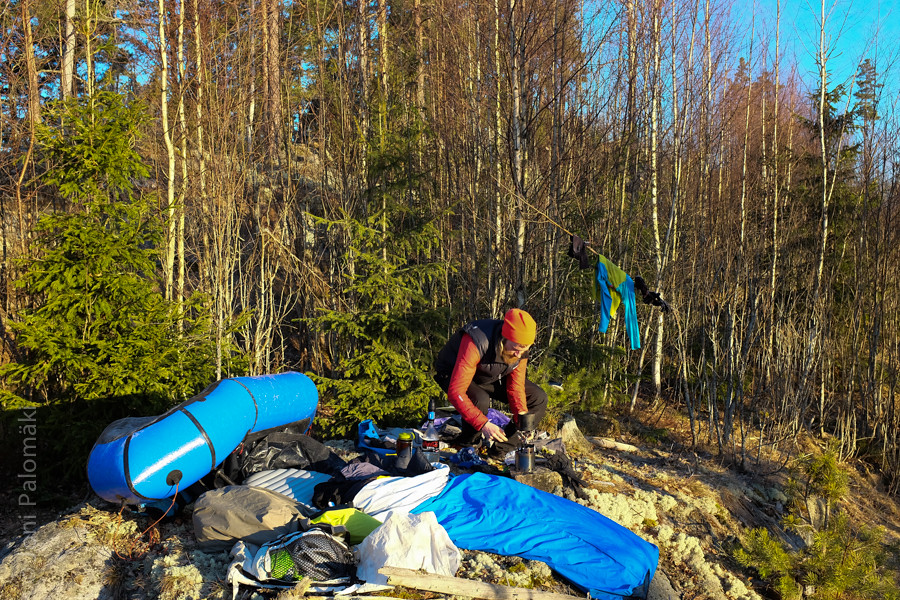 We woke up around six with the sun, and taking it all in we finished breakfast in peace and packed up for the last leg - a paddle down the Siuntionjoki, back to our starting point.

This was my second visit in this section of the river, back in June 2012 I paddled 6 kilometers downstream from Sågars fors (video from that trip is available in Vimeo), and also Marko had been there last October. While we both knew roughly what to expect, the conditions were somewhat different from either of those previous visits, and especially the ice covered banks came as a pleasant surprice, transforming the views.

Starting off above Myllykylä, we first ran a nice series of small rapids that finish with a large drop down the old mill, which we had to portage. 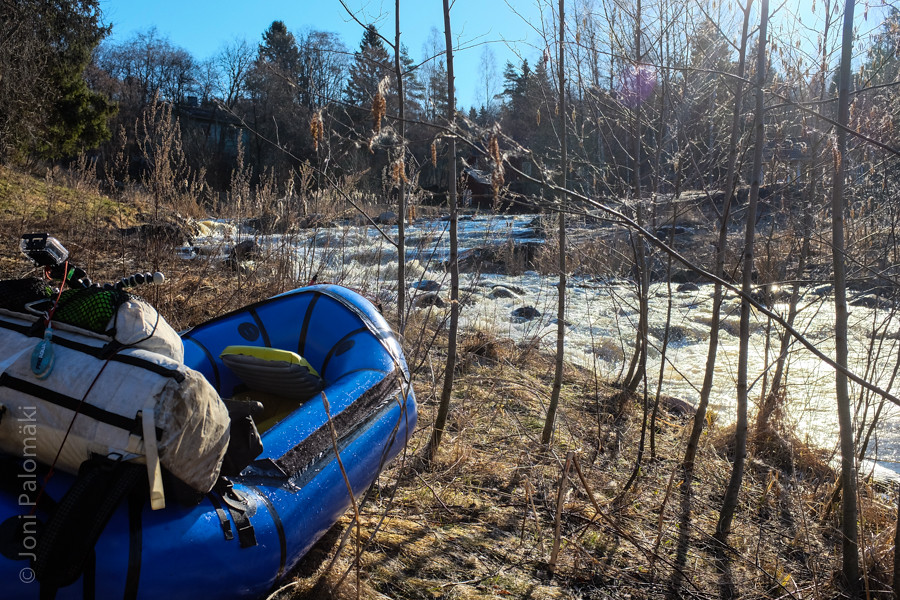 Downstream of Myllykylä starts a series of rapids, the section between Sågars fors and Prästgården some 6 kilometers downstream is often referred to as the “amazon” - a narrow meandering stream well protected by the surrounding thicket, with numerous obstacles (mostly fallen trees across the river and packed driftwood) to negotiate. 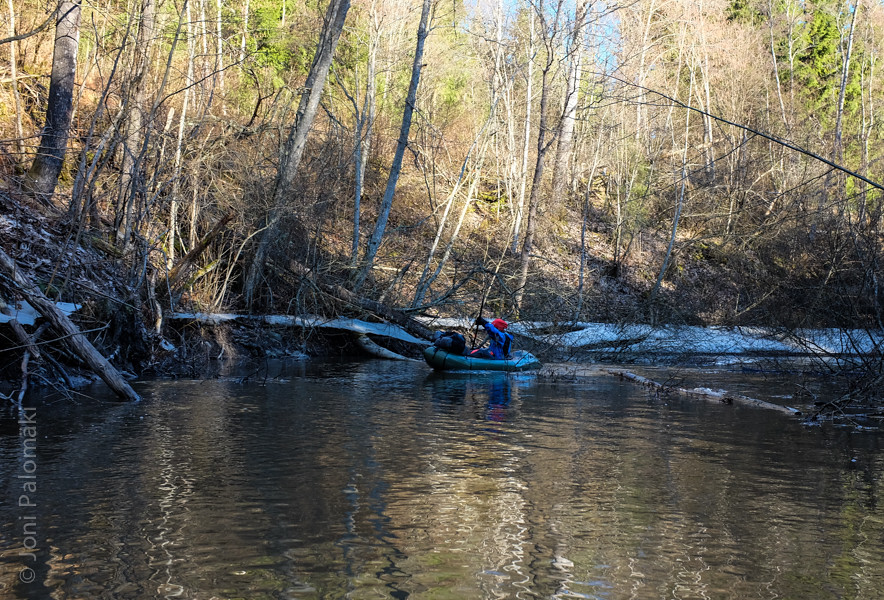 One of the first rapids on the route is Kurkiksenkoski, actually a spillway with good discharge, followed by a short rocky rapid. We ran it twice simply because it was so much fun even if we got a bit wet! 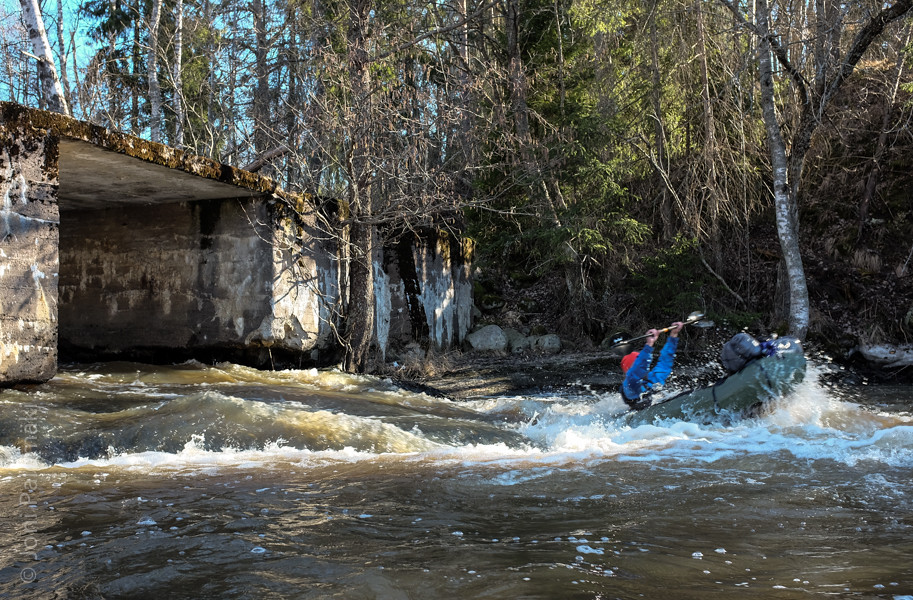 Steady flow allowed breaks without stopping - simply put the paddle down, kick back and have a snack, while drifting down the river. 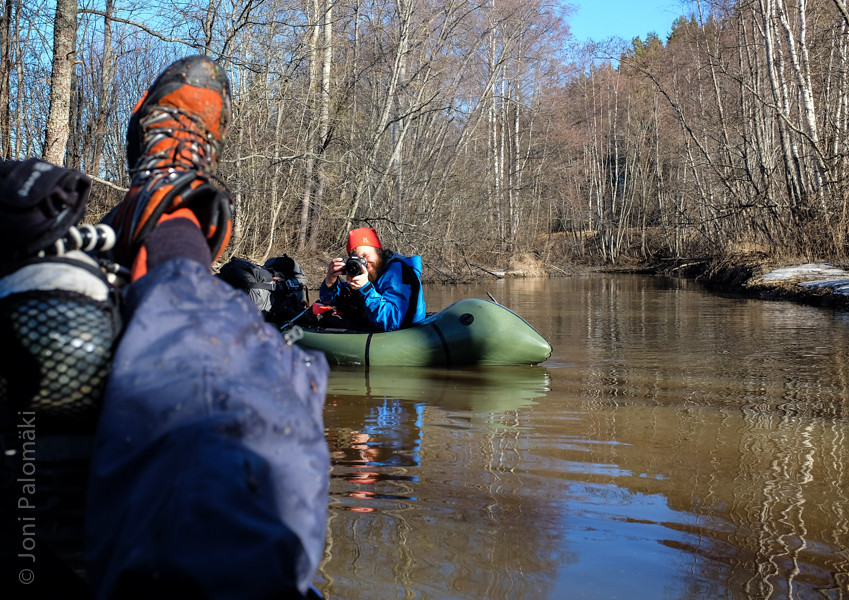 We used two GoPro’s (Hero3’s) throughout the trip, and while I carried my X100s, I only took a handfull of photos and focused more on the video footage. Marko was more effective with his SLR, browse his recent Flickr set for more views. Publishing a video is in the works, but as there’s quite a lot of raw footage to sort and edit, it will probably take some time - stay tuned!

Update on April 6: Video is out!

Passilankoski, which follows shortly after Kurkiksenkoski is the longest continuous stretch of rapids, and at this time had quite a different outlook due to ice covered banks raising even above your head when seated in the packraft. Few more short rapids and a handful of obstacles followed before reaching Purnus that marks the beginning of another section that is without any obstacles and used more regularly by canoers and other paddlers. 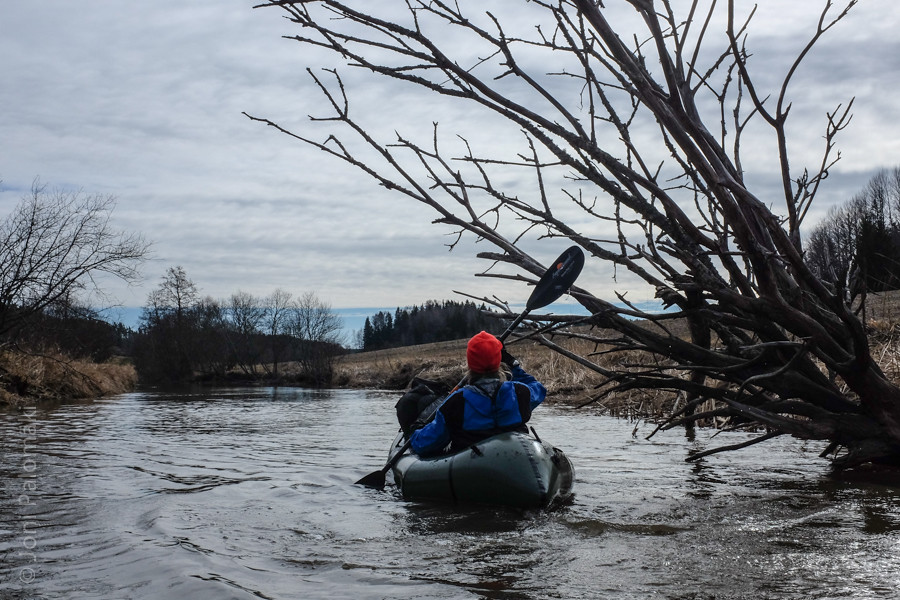 SE-Action organizes group programmes and offers rental canoes to paddle from this point all the way to the sea - for us it was about tracing back the route we had used the evening before, across Tjusträsk (now with polished techniques), and back along the river to the train station, to catch our ride back to Espoo in the nick of time. 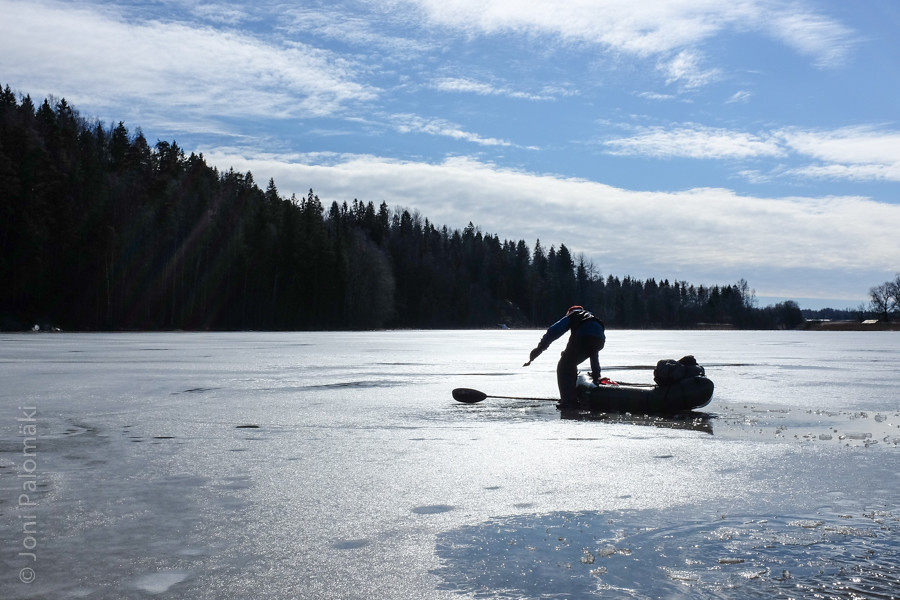