This is now the third season running, since adding Nordic Skating (or tour skating) into my winter repertoire of reasons to get out. Settling for a rather unorthodox setup, pairing the skates with Dynafit bindings and telemark boots, it’s been interesting to learn more about ice and gaining confidence in traveling on lakes and the sea. 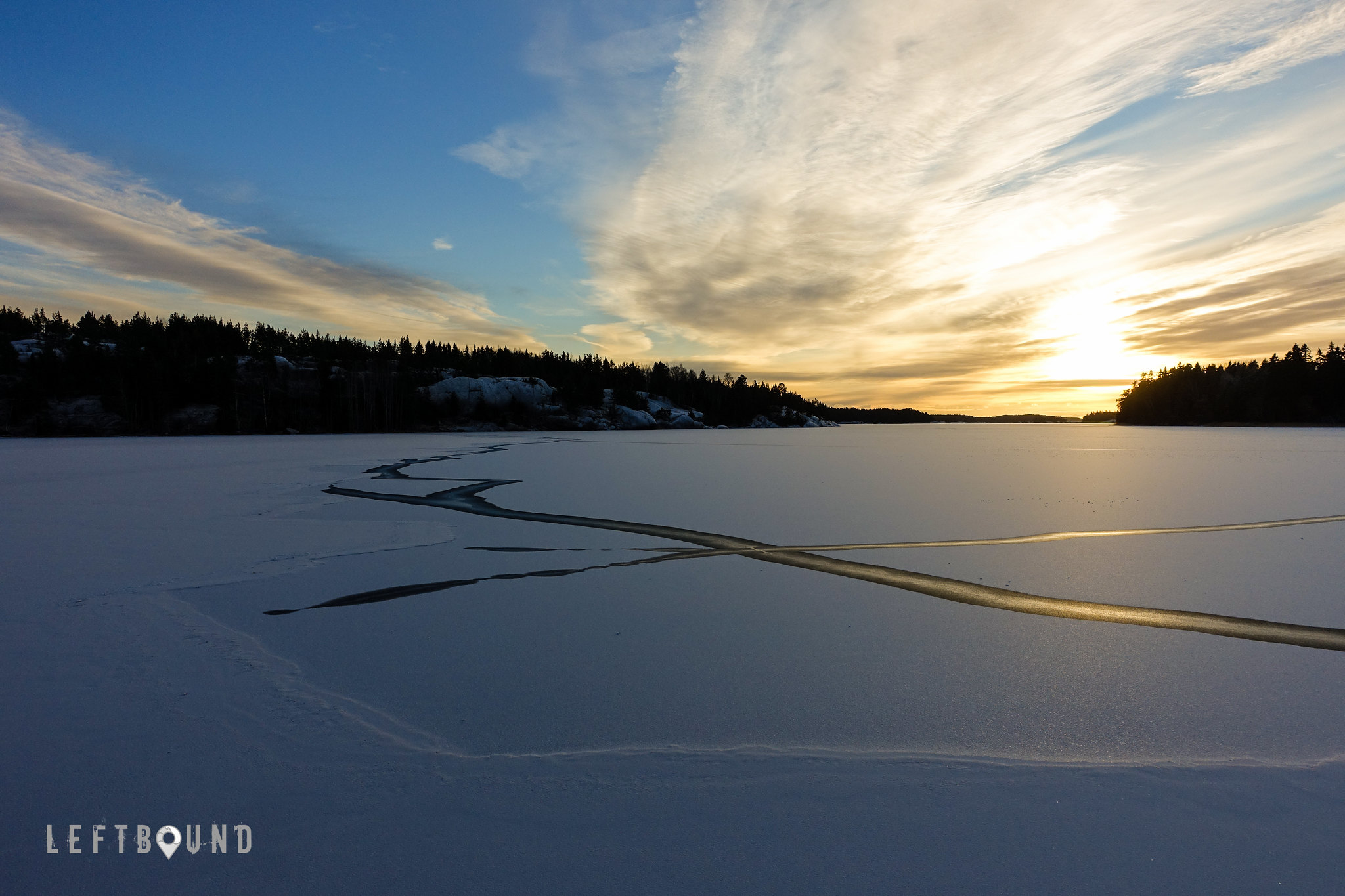 My choice of kit has evolved slightly this year, as I finally added a pair of real skating poles, having resorted to an old pair of telescopic poles, tuned with Exel’s Ice Skater Tips and weights to better (and safely) serve their new purpose. I originally rigged them up as I had trouble finding long enough poles, but eventually found and switched to a 162 centimeter long Lundhags Flash, conveniently on discount at the end of the season, last spring. While these poles are by far better fit for purpose, I do miss the tripod thread I am not able to fit into the slim handles of said poles. 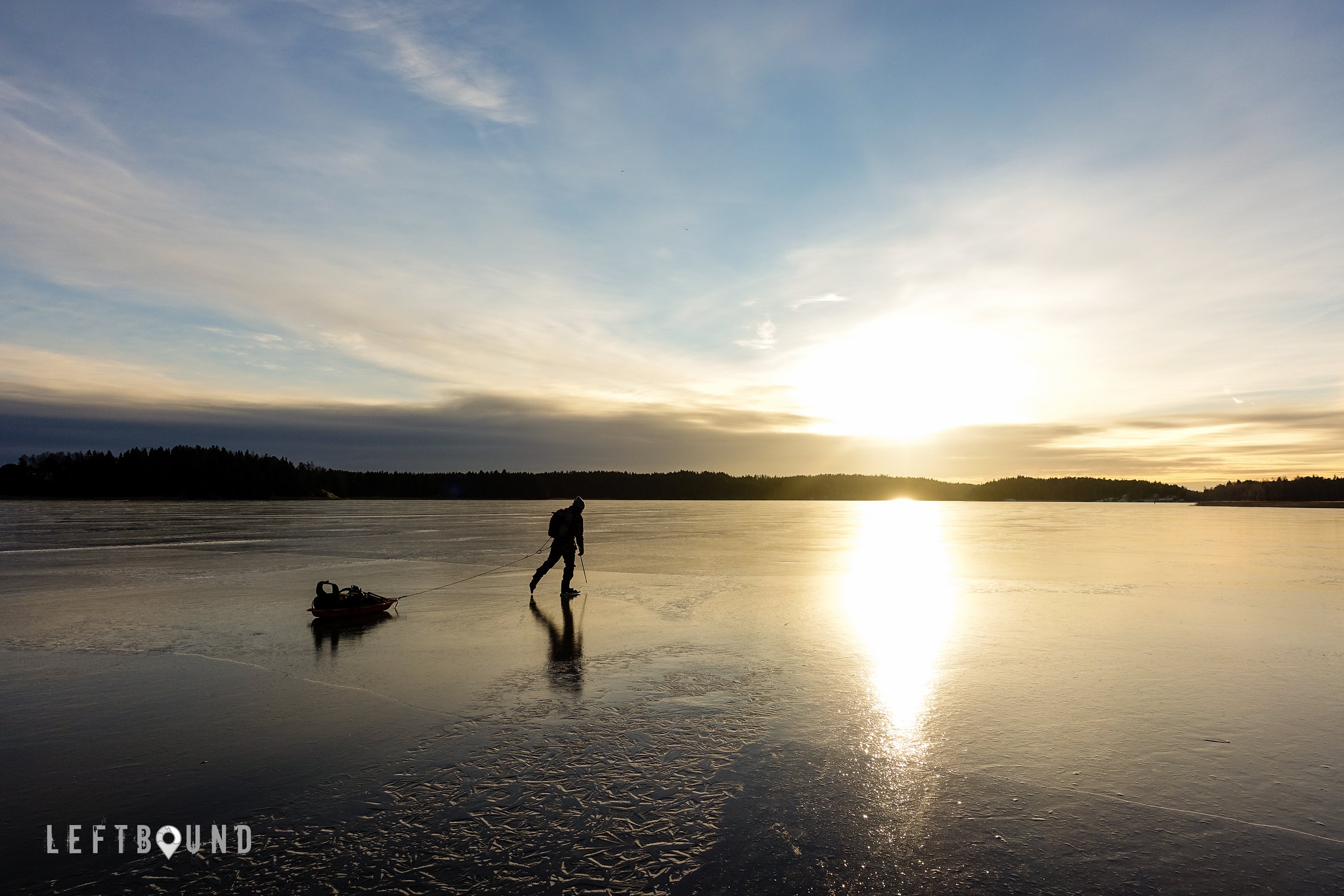 The skate/binding combo has worked great, without any issues. As I ditched the heel piece early on, to allow free rotation of the skate, the setup is very simple and practically bombproof. Hiking short distances (say, couple of kilometers at max) with these telemark boots is perfectly fine, and I’ve only switched to shoes on longer stretches on land. The setup is hence pretty versatile, also providing the much needed support for the lower legs when powered by a small kite - something I plan to test a bit more this winter. At the moment I have no reservations for recommending a similar setup. 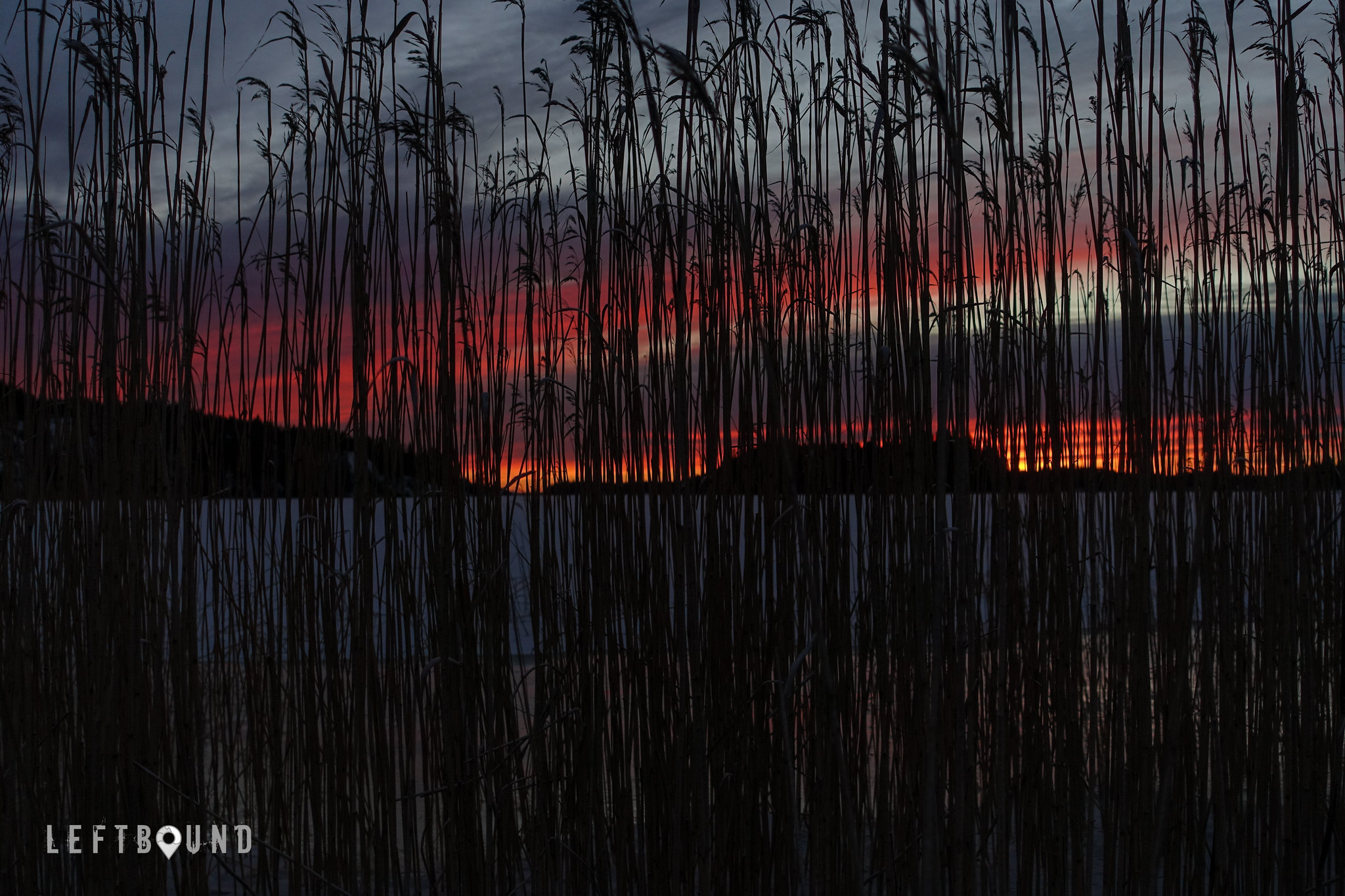 Nordic skating can help to fill the potentially grim gap between late autumn and a full blown winter, offering a great way to enjoy the multitude of recently frozen lakes and of course the archipelago. While sea ice was pretty limited last season, this autumn the season kicked off nicely, with potential for very good coverage over the coming months, should winter take and keep roughly its normal course from this point onwards. It would be great to have an opportunity to do a longer tour on the outskirts of the Baltic Sea archipelago, open horizon firmly at sight - fingers crossed! 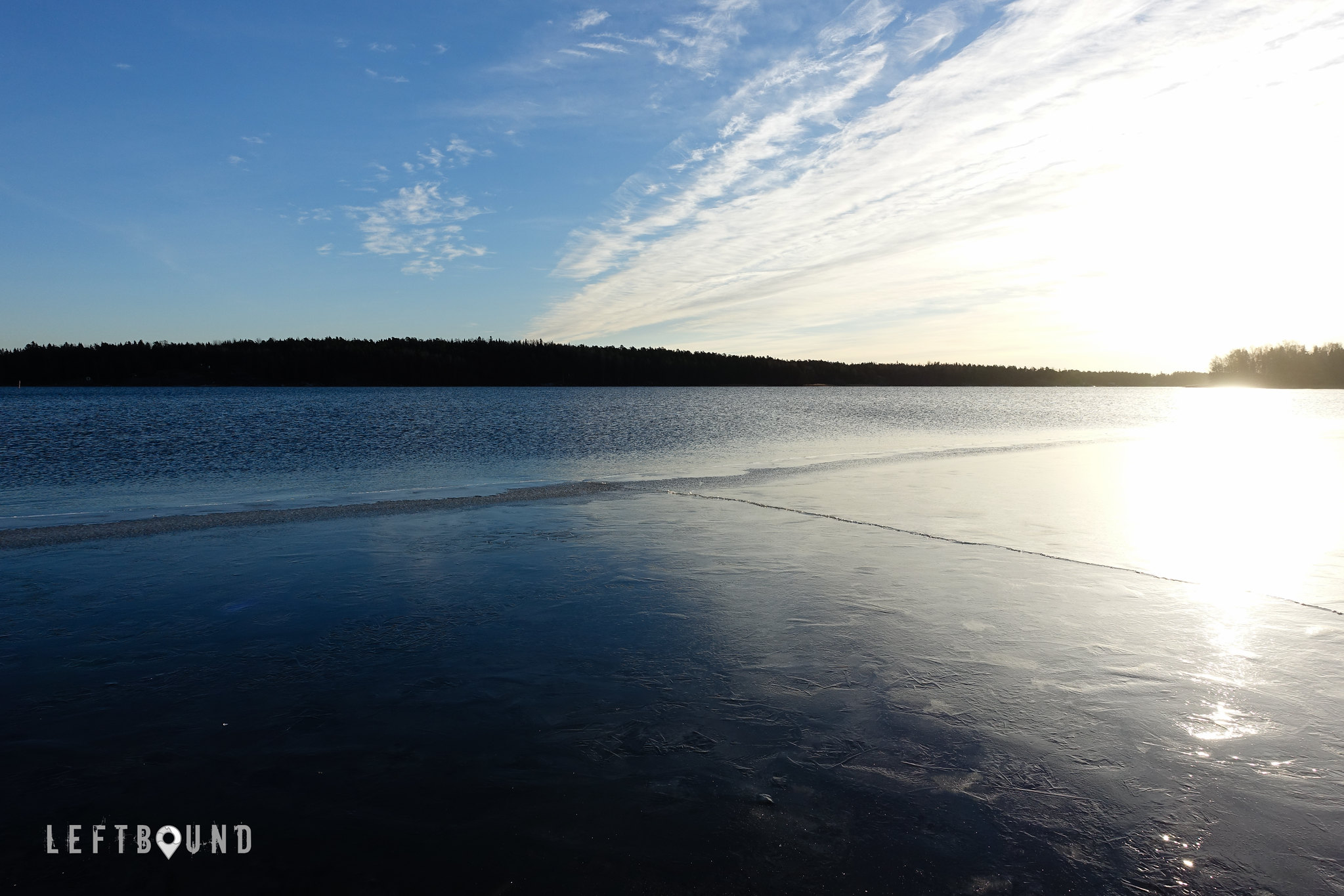 While I prefer to tour alone or with a friend or two, focusing more on exploration and nature observation rather than mileage or speed, the possibility to join some of the many tours organized by Skrinnari, a national tour skating club, is a great asset. As a member of said club, having completed the basic training, one is free to join any of the organized tours, varying in speed and length, and tap into the online resource which offers up-to-date information on ice conditions and also plenty of insight and inspiration for self-organized tours. This season, I’ve joined two organized tours - one early on close by and another one further away, in Raasepori. 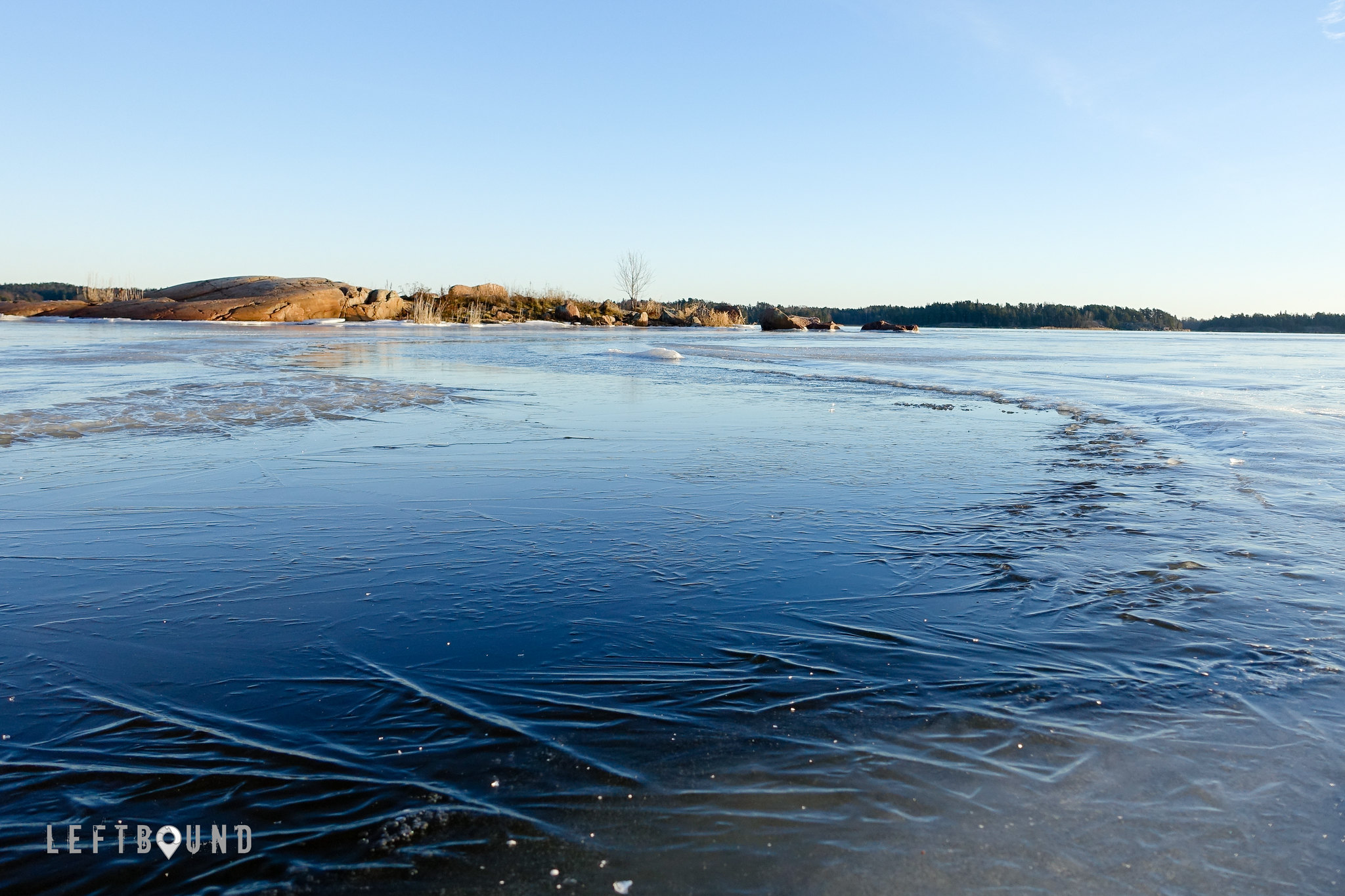 After kicking off the season on December 10, with a 30-kilometer tour at the outskirts of solid ice in the inner arhipelago, I joined a 2-day trip across Espoo and Kirkkonummi archipelago, which my fellow adventurer Marko had plotted on a map. A mix of uncertainty, adversity, achievement and awe, it had all the key elements of a fun and rewarding adventure. Video from the trip is embedded below.

The last tour I did before the year end was a bus tour to Raasepori, organized by Skrinnari. Having explored the Västerby region on foot and by bike before, the jagged lake uplands on that same area were of great interest. Upon arrival in Tammisaari, the busload of skaters split into few groups, with five of us deciding to go explore the area not previously visited by the club. Starting out with a hike to lake Långträsket, we spent the day circumventing wilderness-like lakes, including Grabbskog Storträsket, following every nook and granny on mostly superb ice. 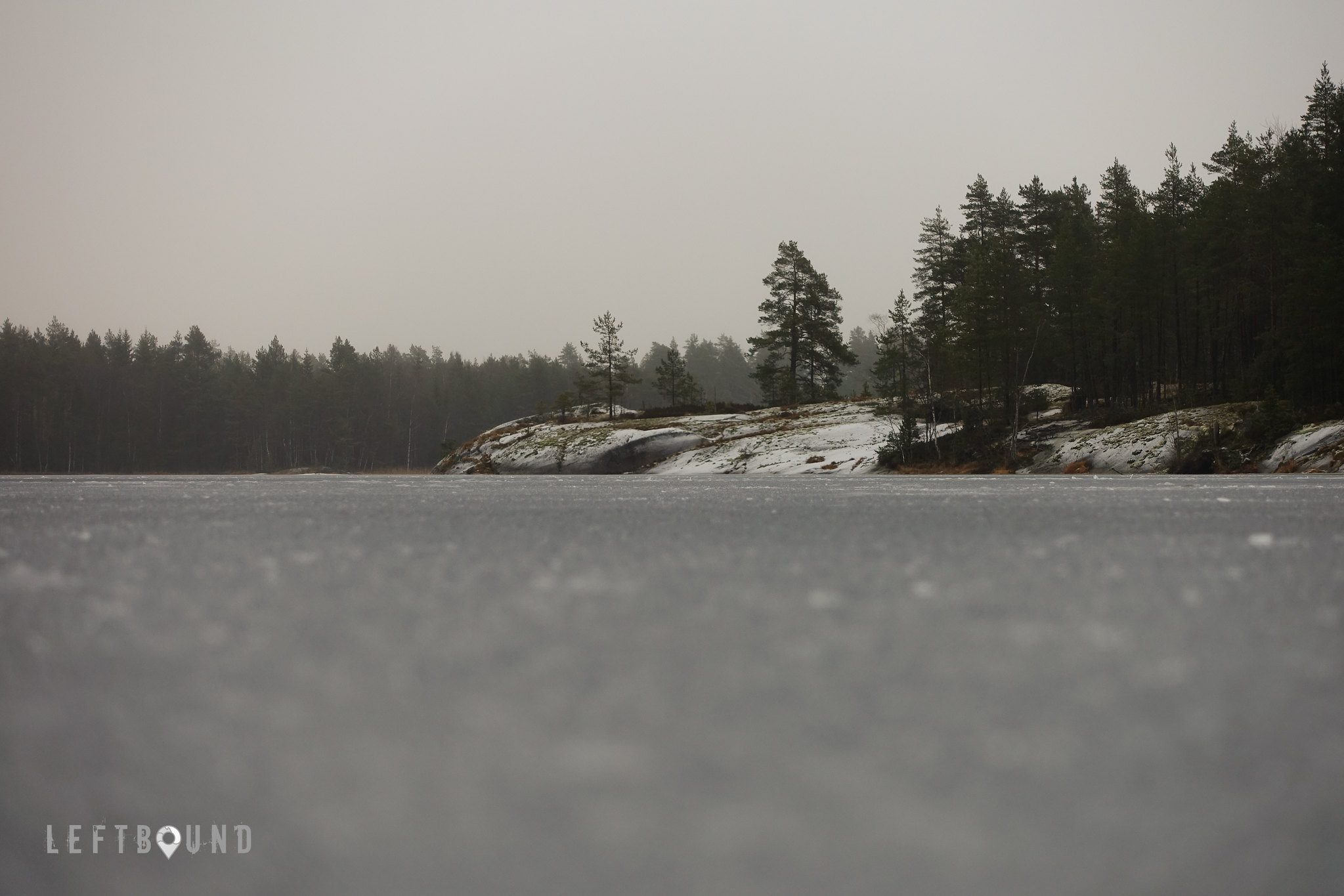 Spotting animal tracks across snowy patches on lake ice, some were easier to identify than others. Sliding marks were no brainer, though the jesting otter was nowhere to be seen, tracks finishing to an air hole. Weather remaining overcast and foggy, it just added to the experience and the day was a success. Finishing the 40-kilometer tour with a loop around the inner Gennarbyviken bay, weather turned soggy, and we skirted around shallow pools of water to the finish - journey back home begun at sundown. 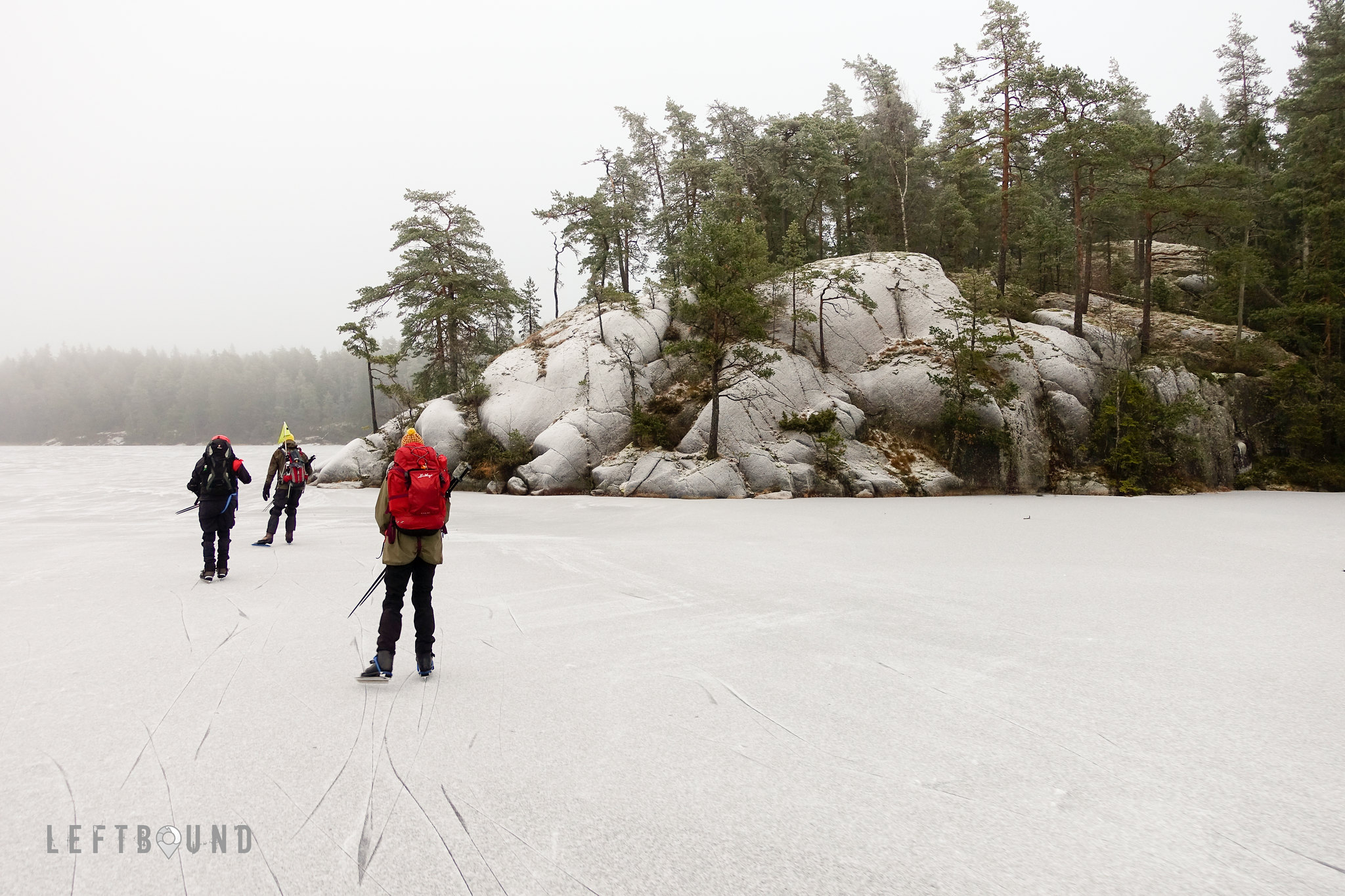 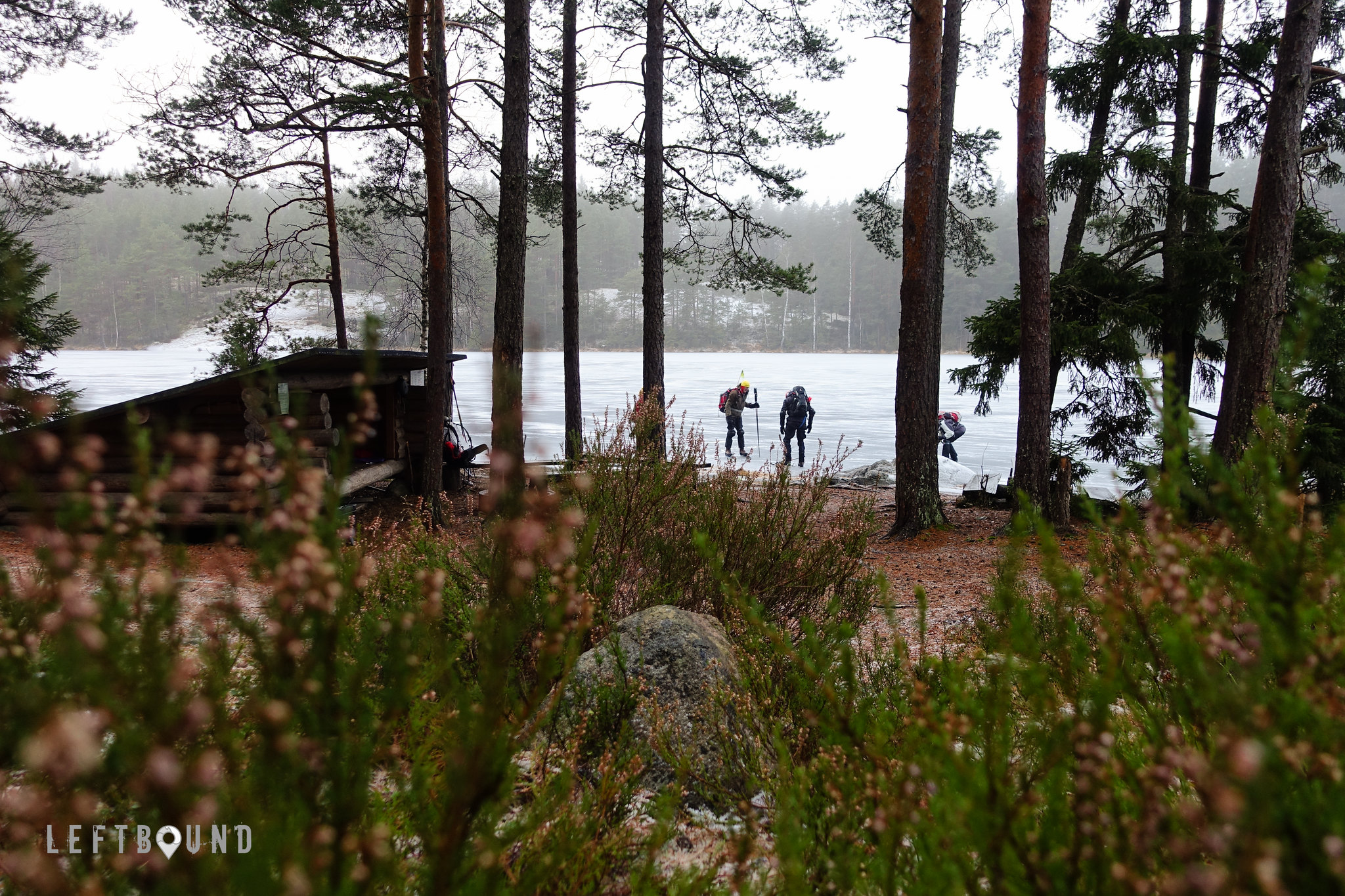 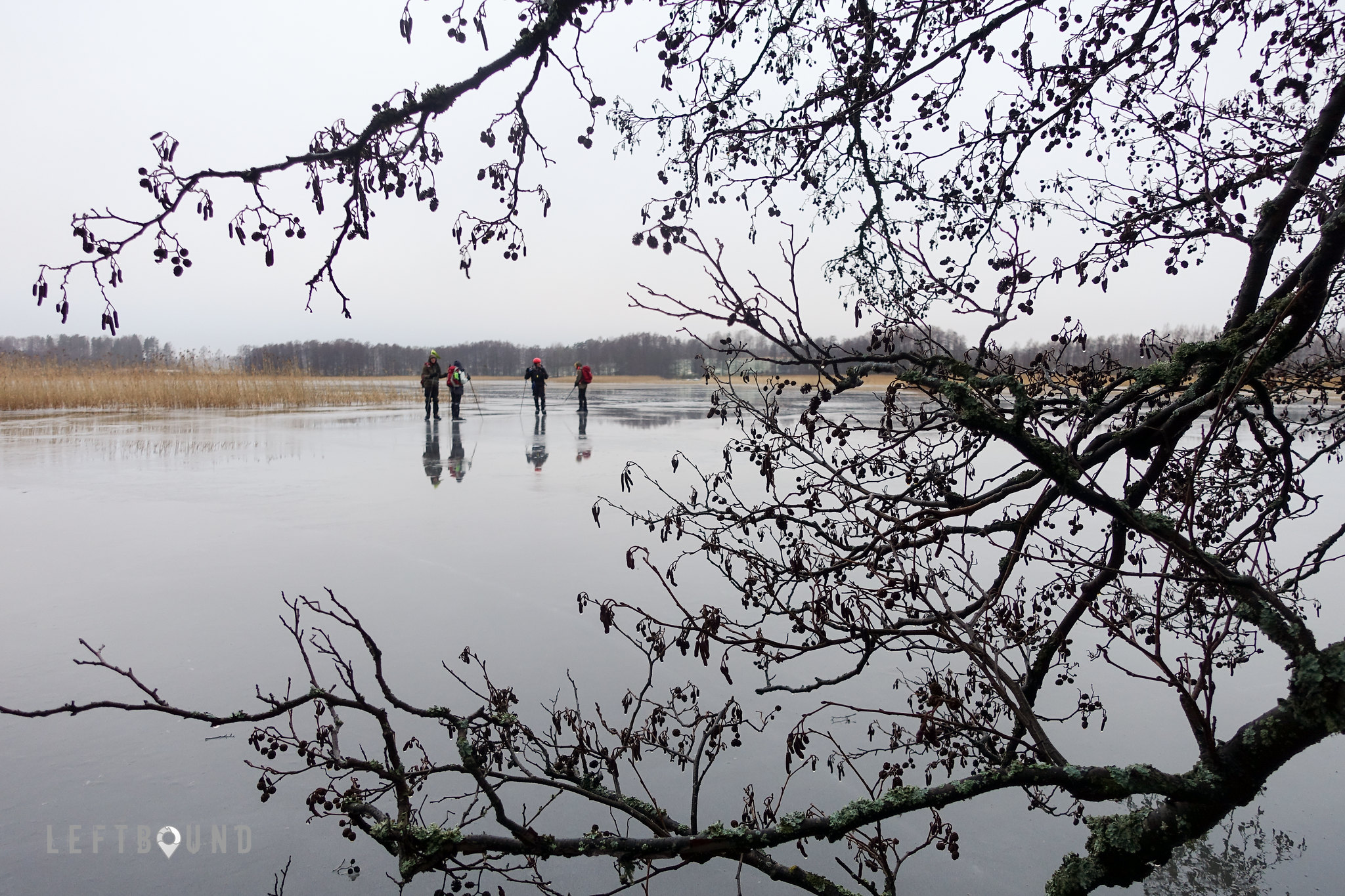 It’s 2017 now, and we finally have a second go on white winter, after November’s bliss, as the new snow just fell last night. Cold front now sweeping over Finland, with temperatures dropping as low as minus twenty degrees celcius even in the south, the Nordic skating season continues strong. See you on ice! 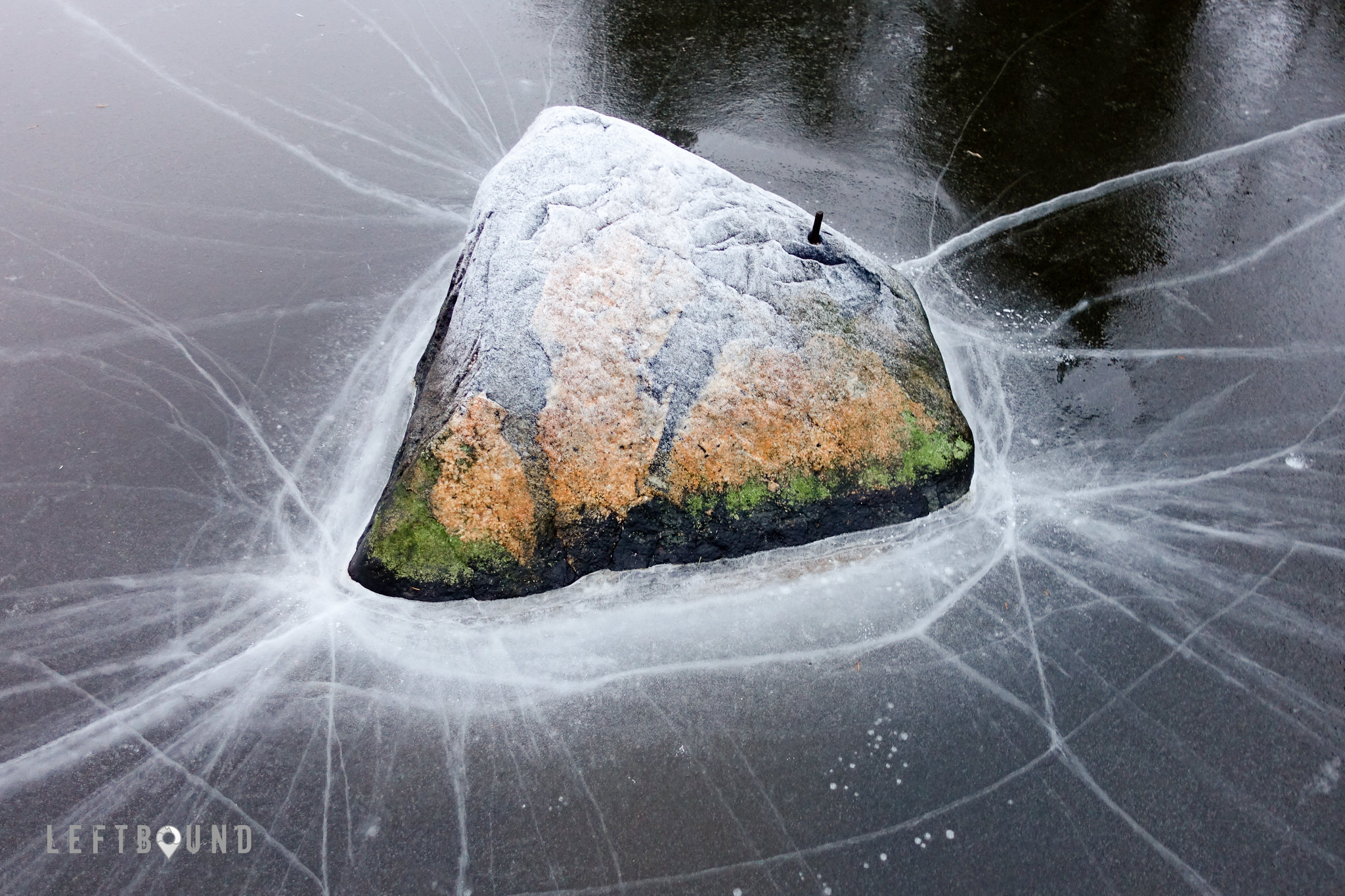