As an avid kite skier, utilizing prevailing winds to glide across snow covered ice, on lakes or in the Baltic Sea archipelago, it has been a dream of mine to take this method of transport into the fells. Recently, winters here in the Southern Finland have been rather mellow, limiting especially the amount of sea ice to a bare minimum, shortening the season for this captivating sport. Therefore it was with great pleasure that I accepted an invitation from Alma Arktika to join a kite skiing expedition in Finland’s largest wilderness area, Kaldoaivi, back in March. An article was published last spring in the Finnish SURF & KITE & SUP -magazine, fresh upon my return, and now with the new season about to kick in, it’s time to revisit this great experience in this blog as well. 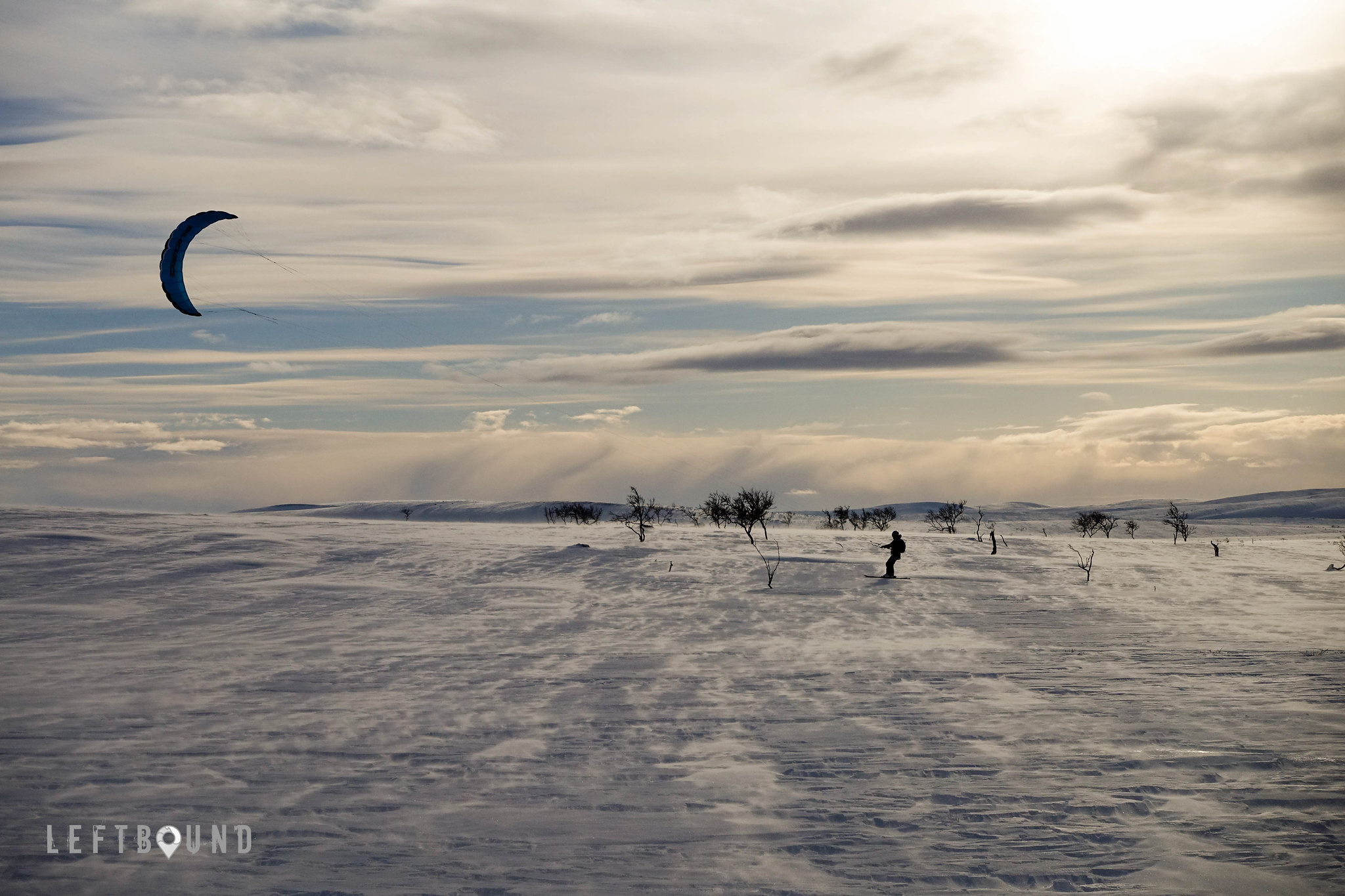 Kaldoaivi is the largest of the twelve wilderness areas in Finland, situated in the municipalities of Utsjoki and Inari up north. The landscape of this mostly roadless fell area, roughly 2900 square kilometers in size, varies from deep and steep river valleys to gentle slopes. The rolling fells and wide open plateaus, spotted with stray patches of scrubby mountain birch, make it a great destination also for snowkiting. 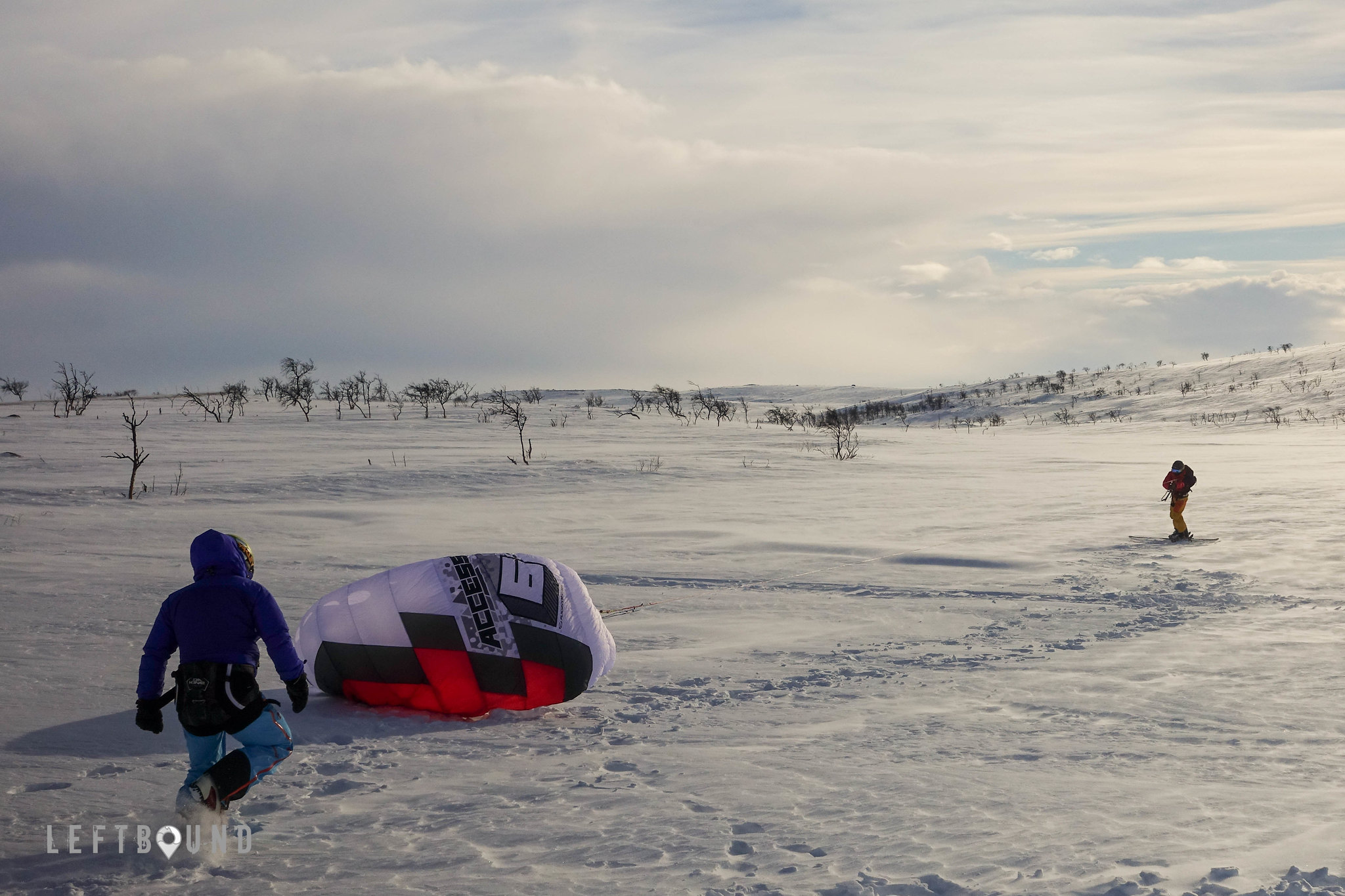 It’s a long way from Espoo to Nuorgam, but luckily during the winter season there are flights to Ivalo both from Finnair and Norwegian, which help to connect the dots quicker, often also with a reasonable cost. While Norwegian appears to operate only during winter months, and only on selected days, having two carriers is still an advantage. I chose to fly in with Finnair, a day early, and spent some time in the city of Ivalo, before sharing a ride up to Nuorgam with few other participants. An inexpensive but rather cozy accommodation was found on a short notice at the Ivalo River camping, situated by the river few kilometers from the downtown of Ivalo. There is also a bus connection from Ivalo to Utsjoki, and should you book your venue with Alma Arktika, they would be able to help with the transportation as well. 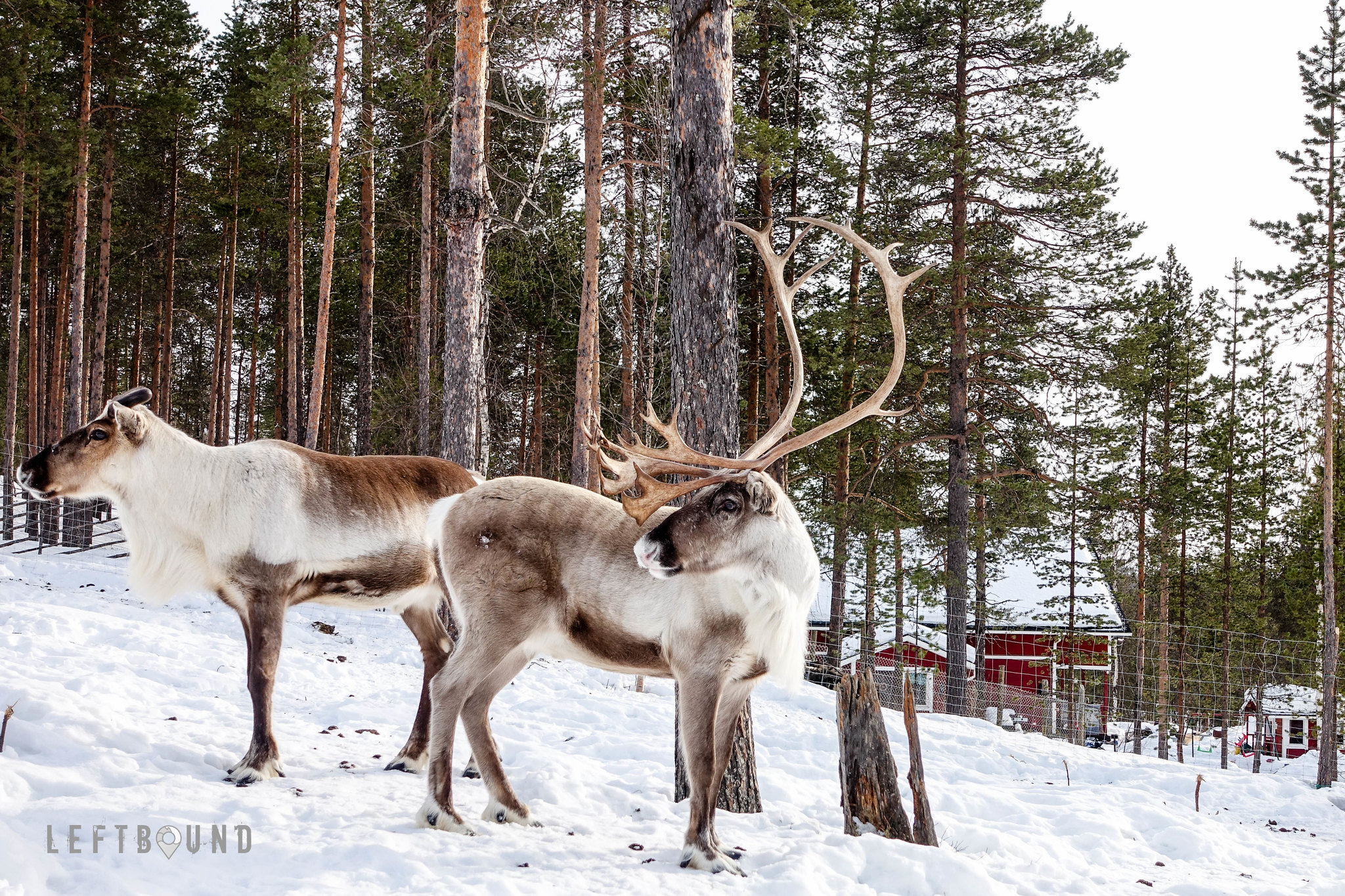 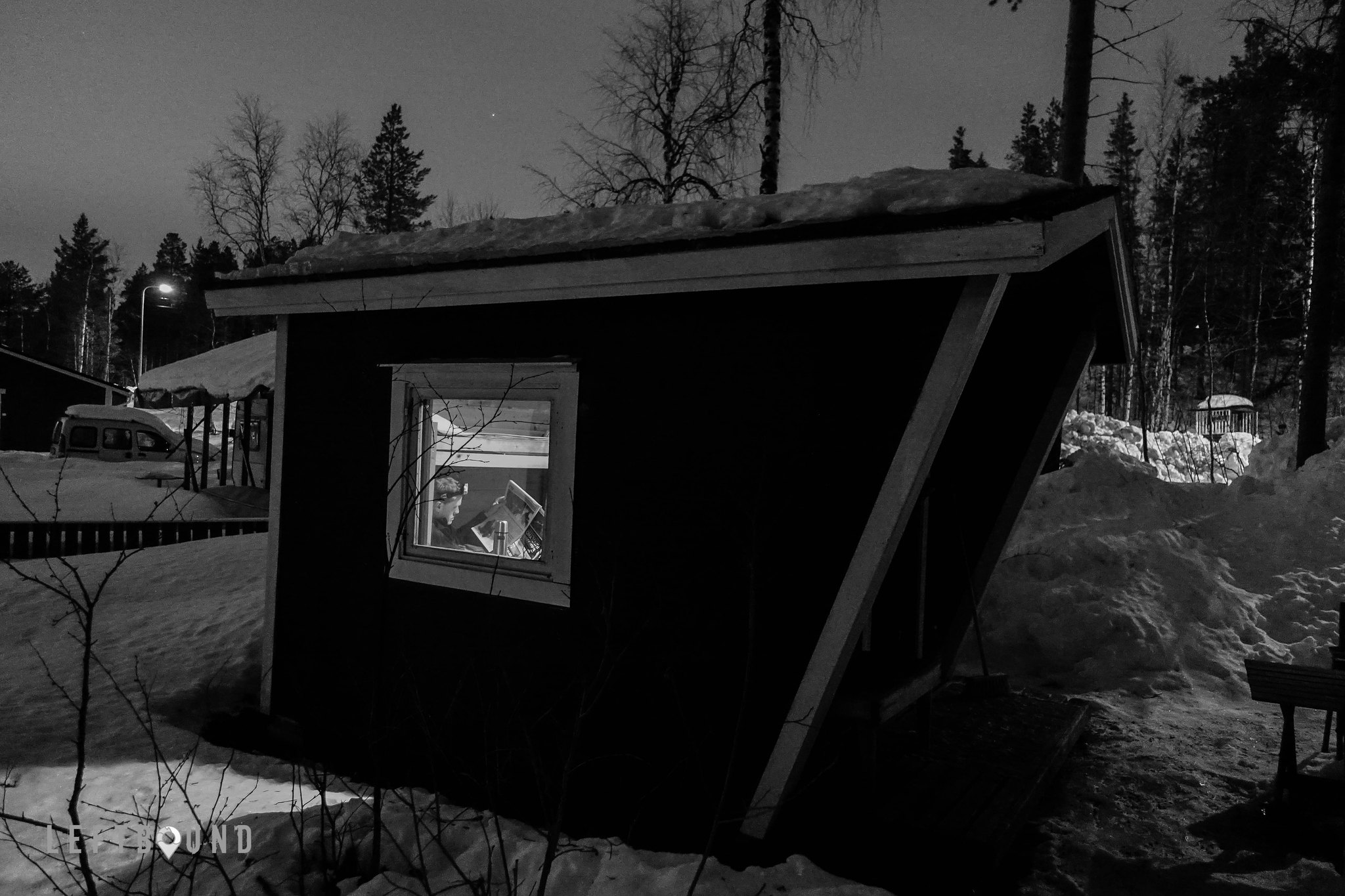 Our group, seven strong, with Hannu and Reetta from Alma Arktika as guides, gathered in a cottage by the river Teno, for route planning and gearing up. As the wind started to pick up, we loaded up two snowmobiles with gear for three days in the fells, and drove into the starting point at the Pulmankijärvi road. As the wind had picked up quite a bit, we pulled out the small, 5-6 square meter kites to begin our journey. Mine was a HQ Kites Scout III, an inexpensive 5 square meter kite that I had purchased at the beginning of the season, to have something to use when my main kite, a 10 square meter Ozone Access XT (from 2011) would be too powerful to handle. The Scout had worked well on the sea ice, despite lacking some of the more refined features my Access XT has. Without trims and proper safety mechanisms (or any flag-out system), it had been perfectly fine for cruising on ice. But as it turned out on the very first day, in the more varying environment at the fells, those missing features quickly came paramount for safe travel, and I ended up packing the Scout early on, relying on the Access XT for the rest of the trip. 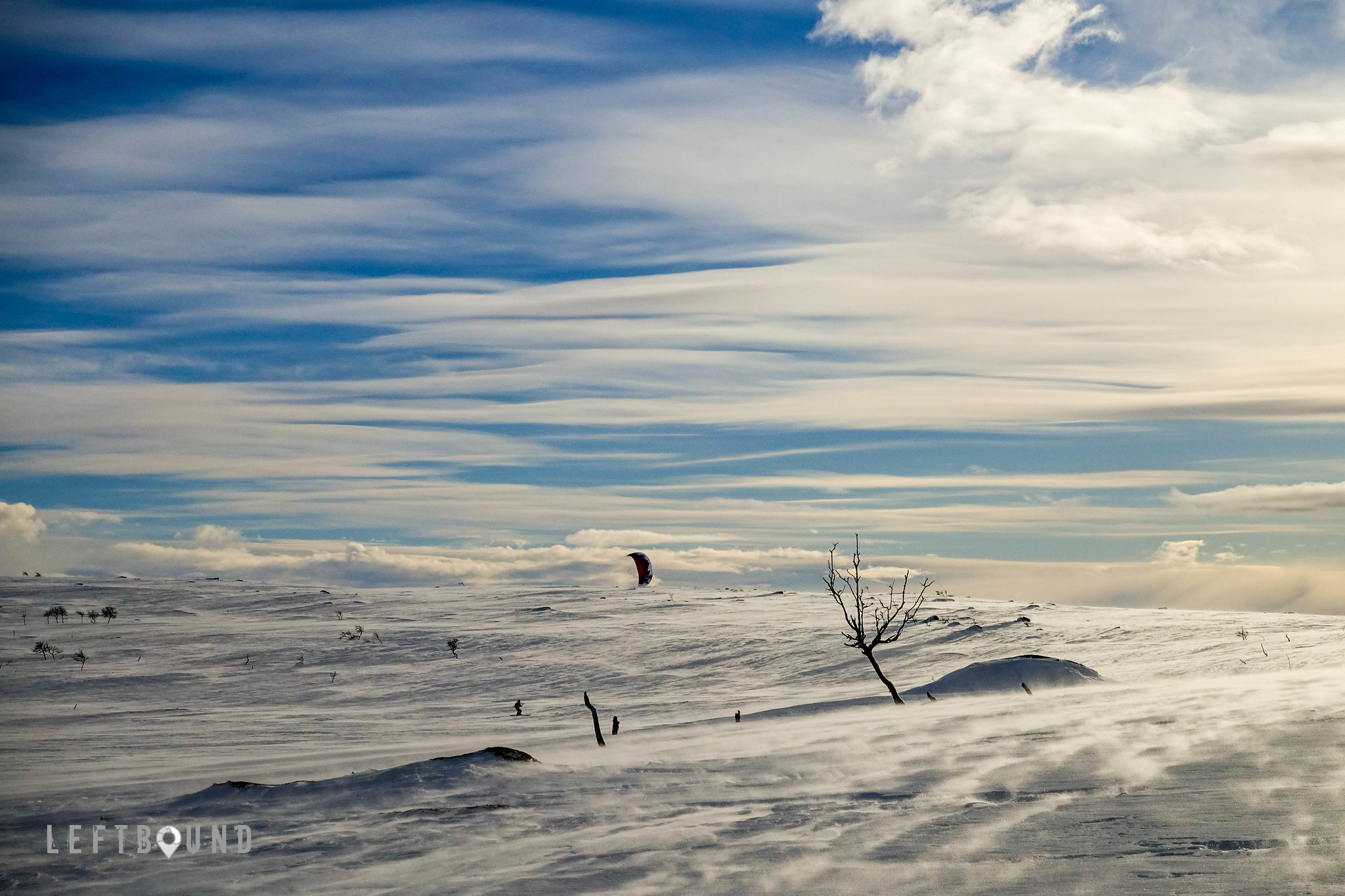 Following the footsteps of the Sami reindeer nomads, we traversed the fells into the heart of Kaldoaivi, covering some 80 kilometers in distance as the crow flies, over the three days. The actual distance skied was somewhere around 140 kilometers. Normally one would split the tour to shorter legs, but as we were out to test a 5-6 day tour in just three days, we had to gain a bit more mileage each day. Each day was different as we traversed across a varying terrain, negotiating over and around the fells. From day one, I was in for a steep learning curve, realizing the importance of skilled maneuvering in the varying terrain, as opposed to flat and open ice fields I am used to, allowing much more room for errors. In the fells, you need to plan a lot more ahead, keeping a close eye on hazards such as ravines, rocks and trees, and changes in the terrain and snow pack, all this while having a full control of your kite, ready for surprises. Wind, though also your best friend in this sport, proposes another potential hazard, as it can change very quickly, both in strength and direction, when you travel on a meandering terrain, exposed at different angles. 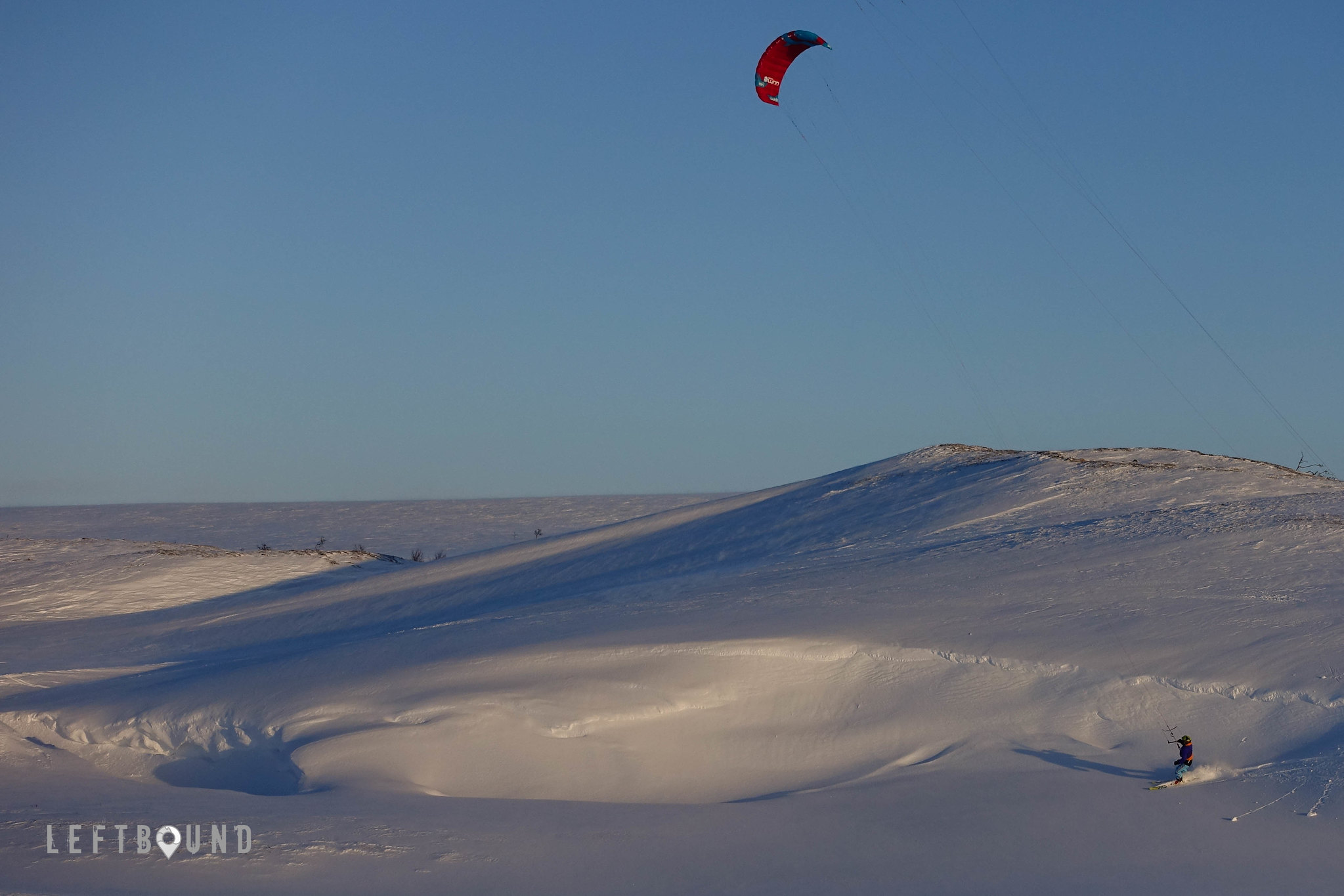 While wind was mostly on our side, rarely picking up too much, or completely dying out, the two snowmobiles that we had with us, to carry most of our gear, came in handy at times, allowing us to quickly relocate when necessary. This was done simply by holding on to a long line, attached behind the snowmobiles. Without this type of support, one would simply need to reserve time to cover ground on skis, should the conditions become such that safe travel (or travel at all), propelled by a kite, would no longer be possible. Having a motorized support is of course also a safety measure, as help is far away, and mobile phone reception scarse in the area. 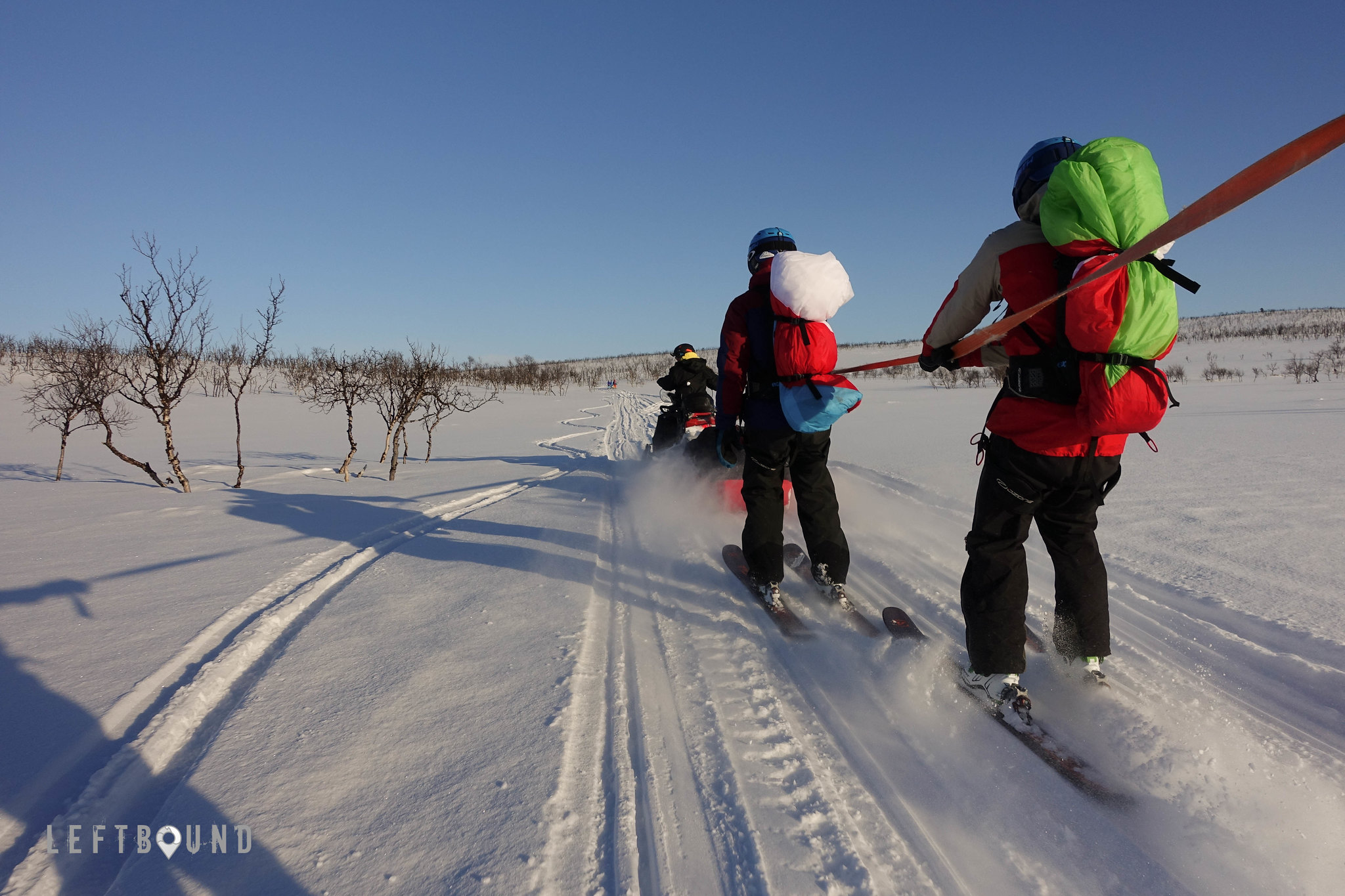 We used PMR walkie-talkies to keep in touch when on the go and to pass information about direction or any sudden hazards, such as qusty wind, traveling as a scattered group. This worked well, although a handsfree kit (a monophone or a headset) is a necessity. For safety, each kiter carried a backpack with essential emergency gear, should one get lost in the fells, or for any other unexpected event leaving one stranded in the wilderness. As one cannot rely on the PMR radios to maintain contact at all times, and with limited mobile phone reception, it’s crucial to keep the group relatively close together. Getting lost in the fells is all too easy, especially if you accidentally wander off, fast, to a wrong direction and the weather suddenly deteriorates. 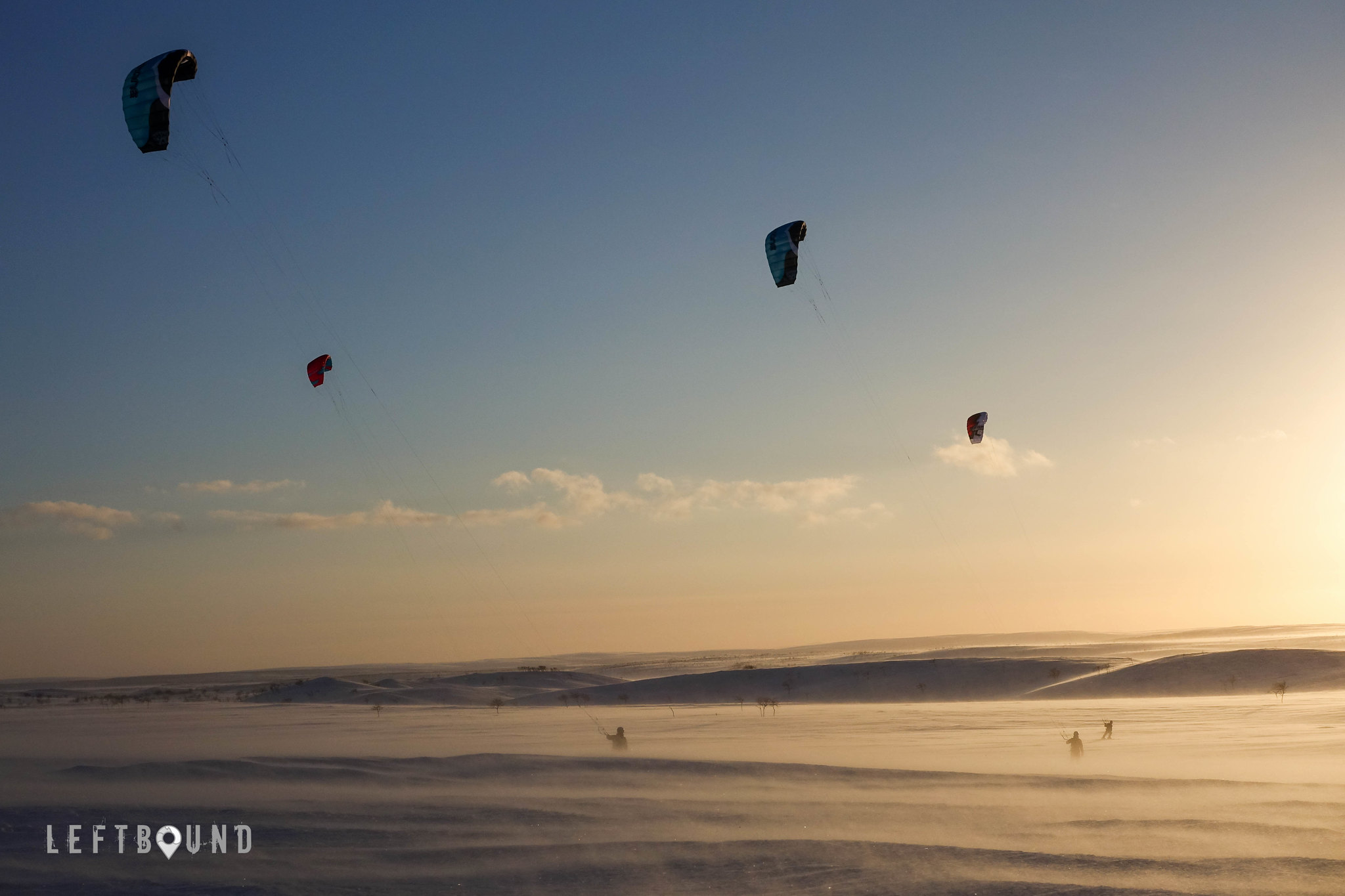 Traveling across the wilderness, we took shelter for two nights in an old herder’s hut, built alongside of an old reindeer round-up place, roughly half-way of the turn around point. Lacking much of the modern amenities, it fell short on nothing, as we enjoyed the warmth of the wood burning stove, feasting on lappish delicacies, recovering from the long days in the fells. Reaching the furthest point on the second day, we had a lunch break in one of the huts Alma Arktika is renting out, at the lake Riekkojärvi. A beautiful and serene spot, and great also for fishing and hunting the willow grouse. 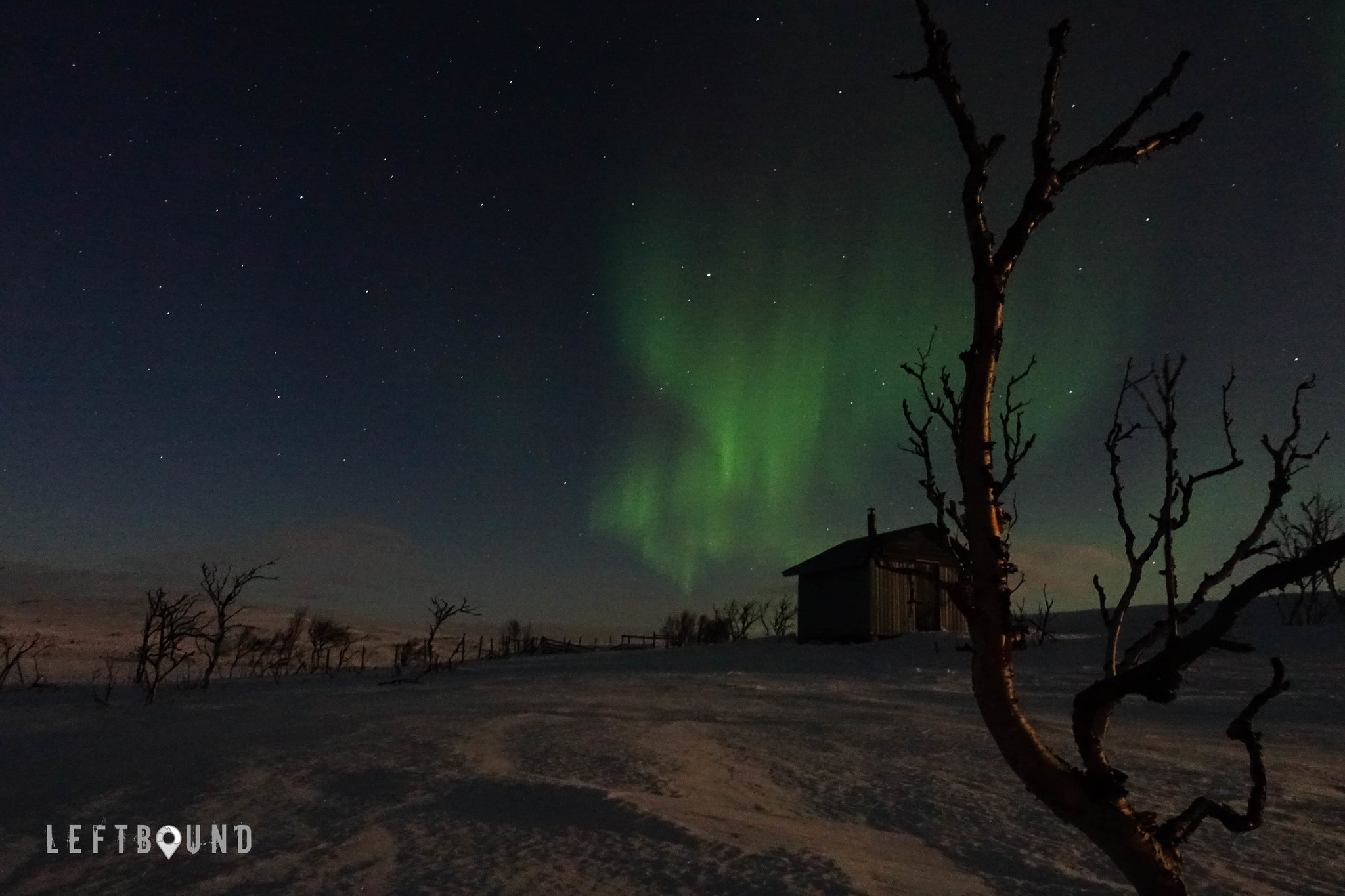 As I mentioned, despite my earlier experience with kite skiing, this trip brutally revealed the gaps in my kite flying skills, and during the expedition, attacking the steep learning curve head on, I gradually gained confidence. On the second day I started to relax more, getting accustomed to the new terrain, and further honing my skills and adjusting to the environment. Third day was the best day I’ve had so far with a kite, as I was taking it all in, in just about perfect conditions for my large kite. Satisfaction came not only from learning to manage in a new environment, but also from all the small victories along the way - being able to make the right maneuvers, maintaining the intended path in difficult wind, or succesfully negotiating a troublesome obstacle. All this in the stunning, barren but beautiful, landscape. 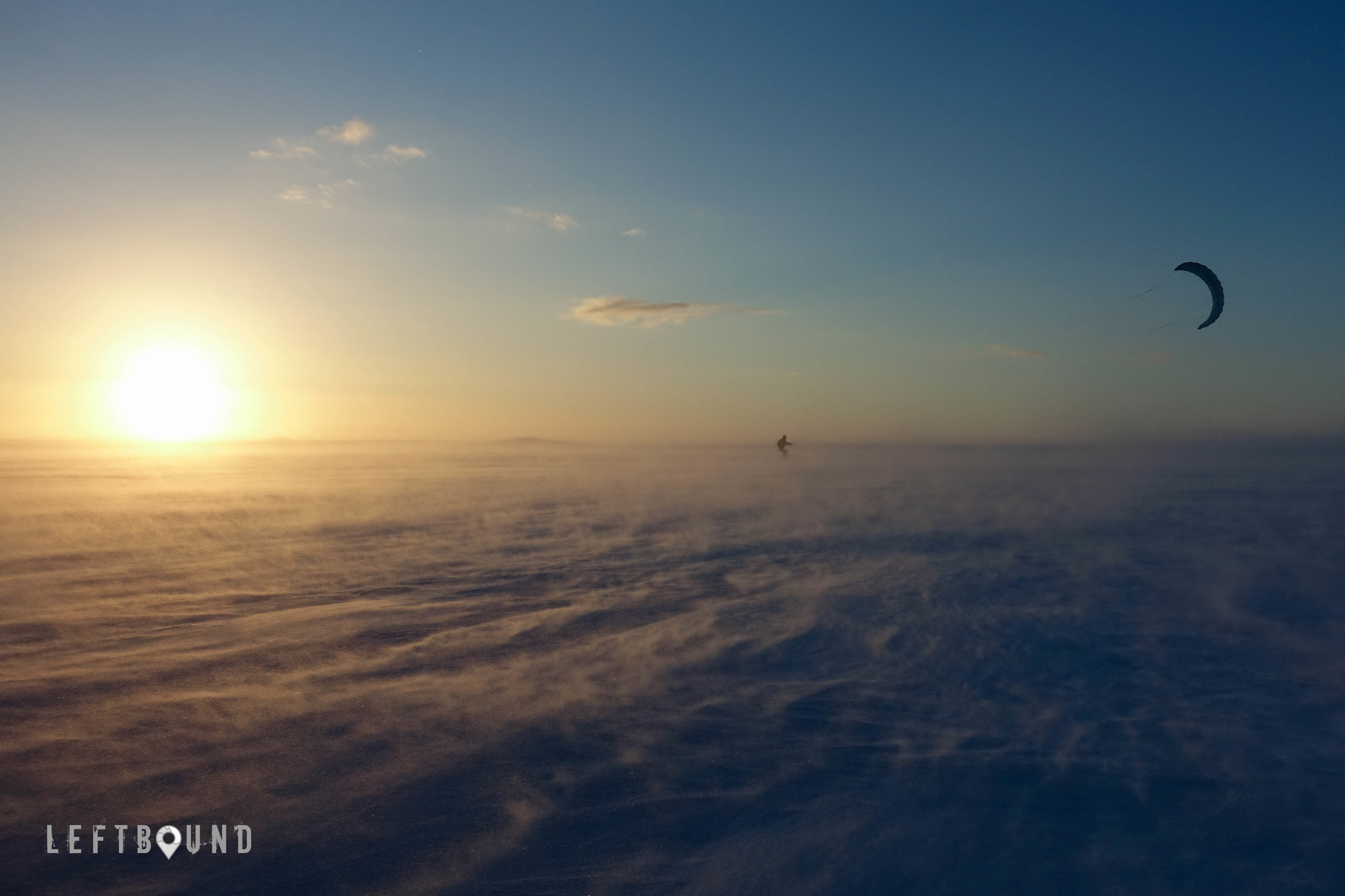 It was with some sadness when the tour came to an end, and it was time to pack the kites and start the journey home. Sharing this experience with a great bunch of skilled kite skiers was a privilegde, and I learned a lot, gathering also tips and ideas for future tours from the more experienced participants. With Alma Arktika at the reins, I could fully focus on the experience, and rely on their expertise for advice and all the practical arrangements. In addition to a promise to take myself back into the fells with the kite soonest, I returned home also with a whole new mindset in terms of how to further develop my skills as a kite skier, in the familiar surroundings in the Baltic Sea archipelago. I cannot wait for the new season to kick in! 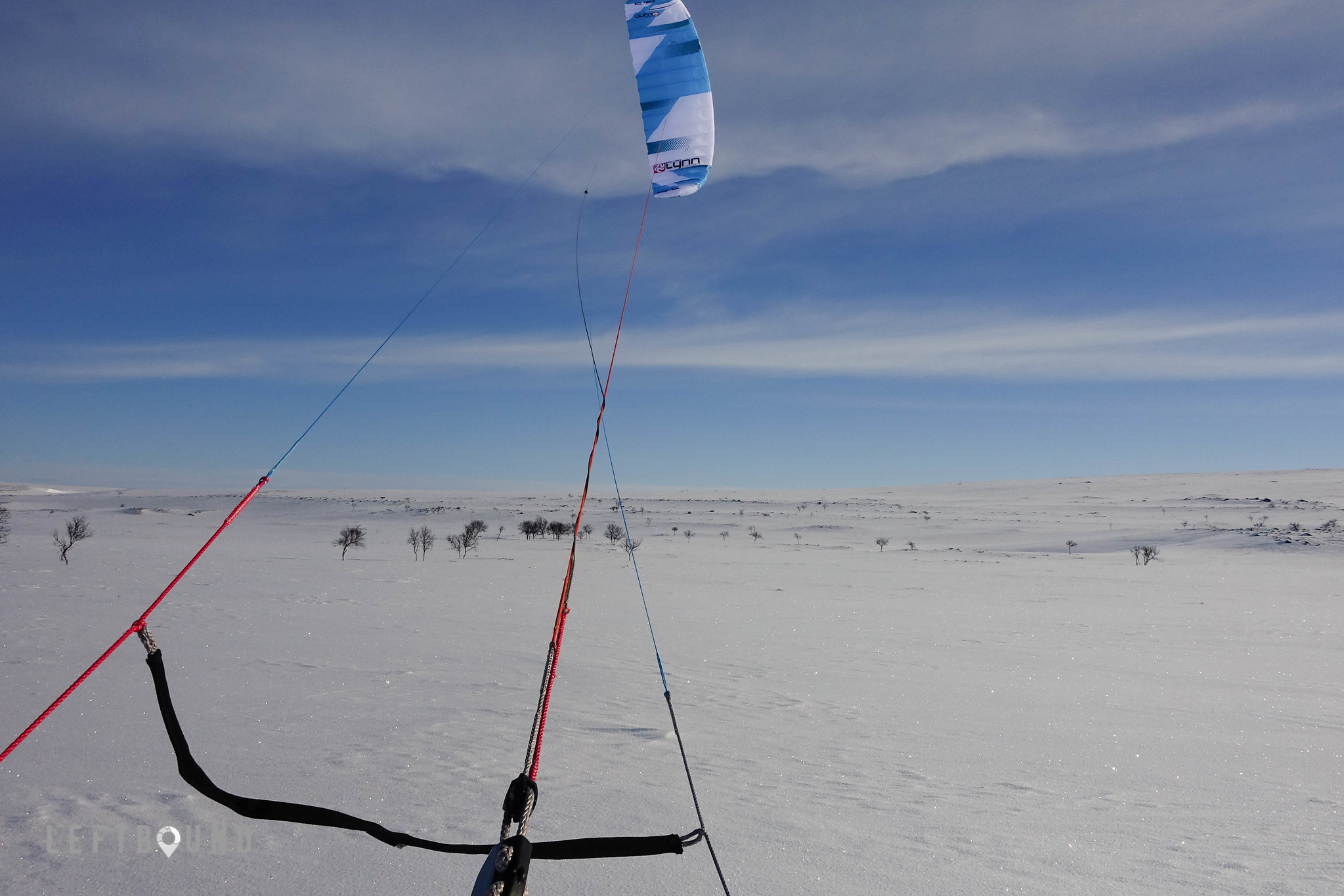 ❯❯ Flickr album (with more photos): Kite Skiing Expedition in Kaldoaivi. Photos do not necessarily make justice to the spirit and the feel of kite skiing, especially when touring in the fells. A video, shot from a drone, does the job better, so here a short clip shot during this expedition, courtesy of Toisniemi Backcountry Photography.