I don’t own a real, full-size, tripod and actually haven’t had one since I bought my first digital camera, back in 2001. I have however had a small selection of small tripods to carry around, when I need to rest the camera on something more sophisticated than a fence, tree branch or say, a pile of snow and a glove. Of those portables, Gorillapod has proven to be most versatile, though I’ve had my share of trouble with them, breaking not just one, but two Hybrid’s during the last couple of years. A leg falling off in both cases, they were warranted by Joby, and today the Hybrid is still my go-to tripod for outdoors. 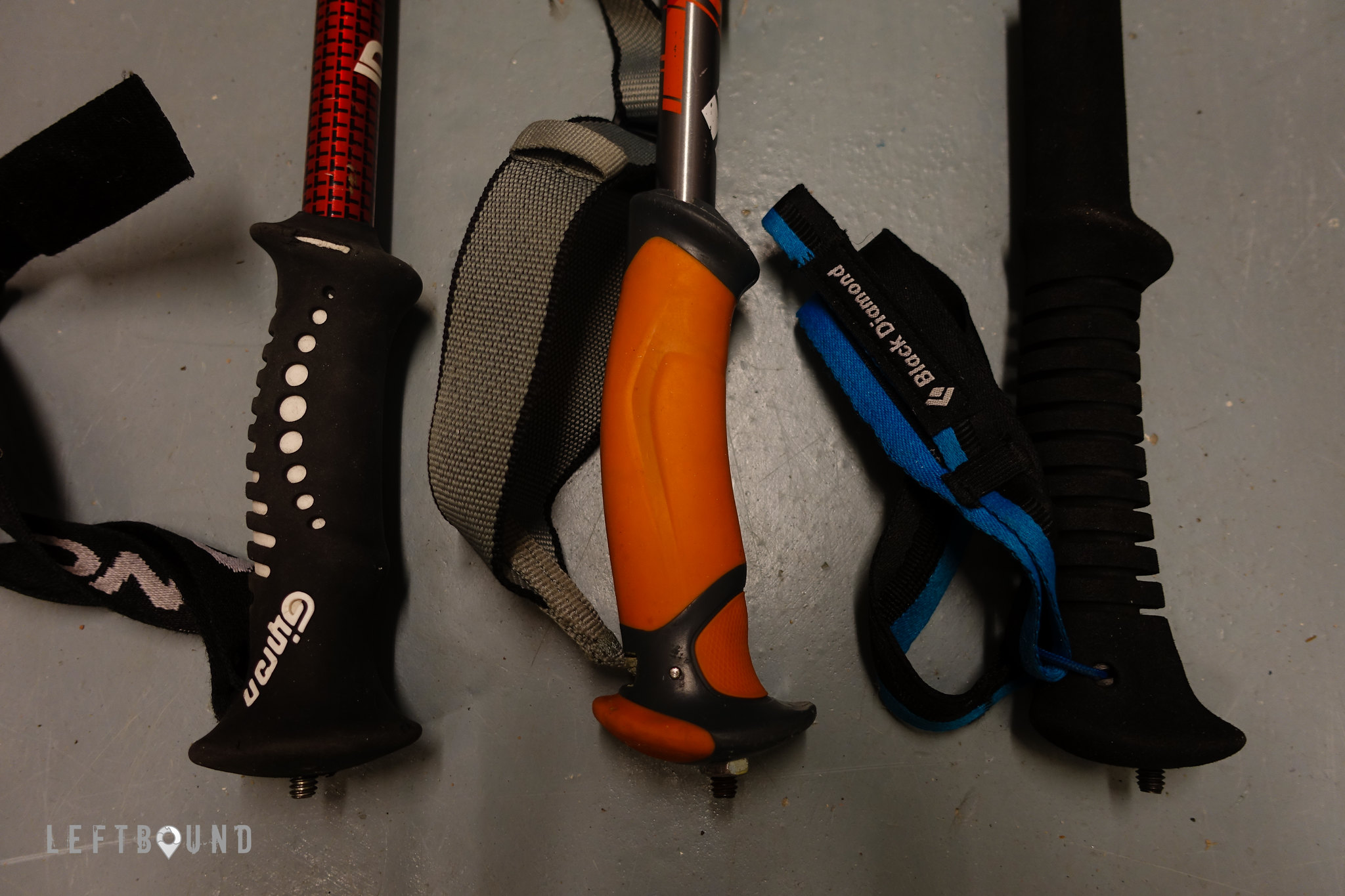 In addition to Joby, I have also held onto a Pedco Ultrapod I. A superlight and small, and cheap, yet sturdy tripod, it has even held a full frame DSLR without flinching. And with the included velcro strap one can easily secure a smaller camera on a tree branch or similar sketchy platform. Third tripod I have is actually one without legs, the TrailPix Ultralight Tripod. I got this off Kickstarter back in 2013, but it hasn’t really been used much. 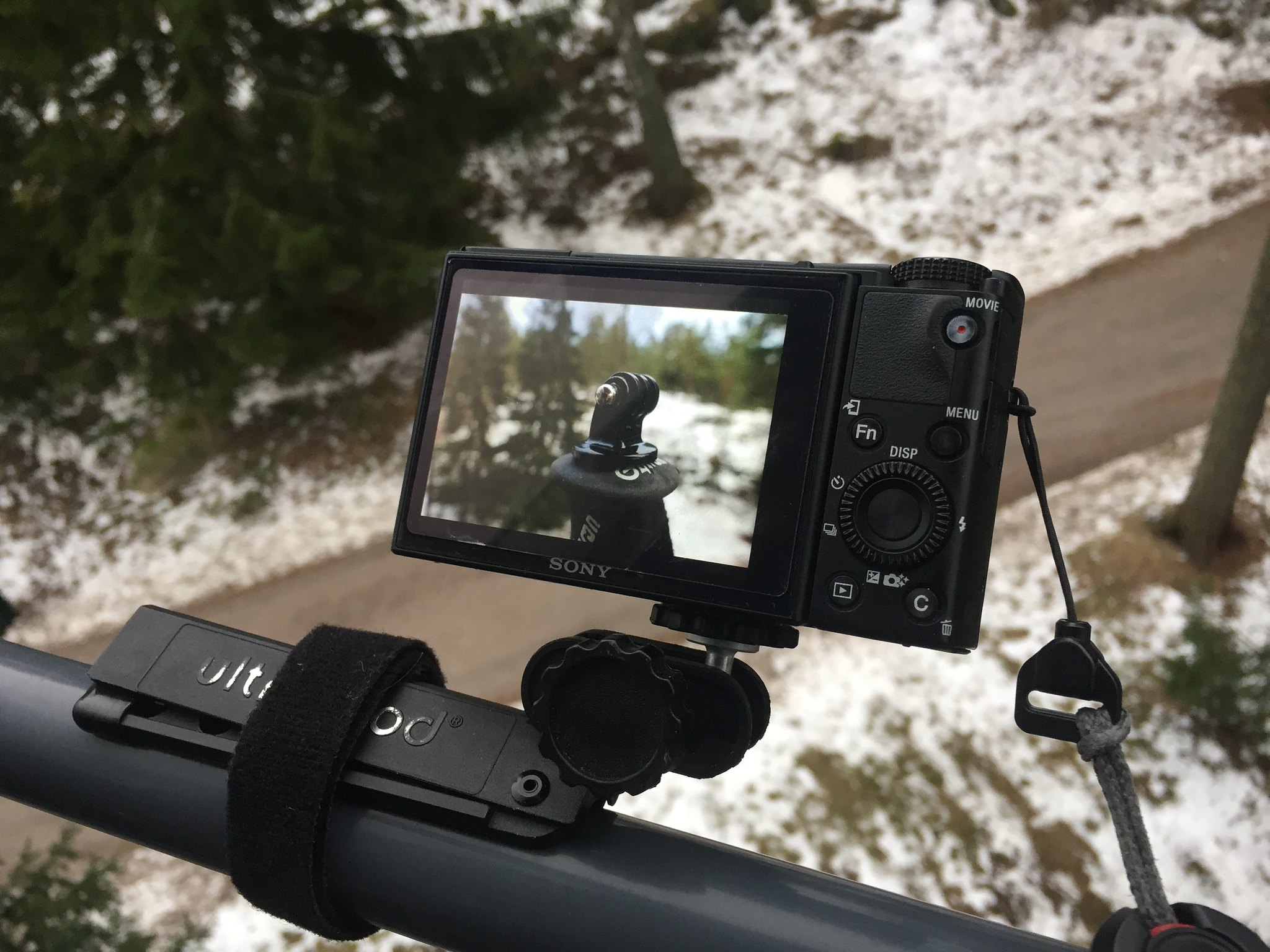 The reason is mainly that in addition to utilizing two short poles you ought to have with you, it still needs a third one, typically a spare pole (if you carry one) or a separate aluminum pole. Of course a wooden stick would do as well. I have poles when going (telemark) skiing, cross country or nordic skating poles are simply too long if you consider the need for a third one, and on some of the longer hikes, but most of hiking, paddling, climbing and whatnot is done without any poles. So, while the product is actually very good, with legs locked in place with screws and a solid Kingjoy BD-1 ballhead included, for me it’s not a very convenient product to use. But mainly for the (removable) ballhead, I still hold on to it. 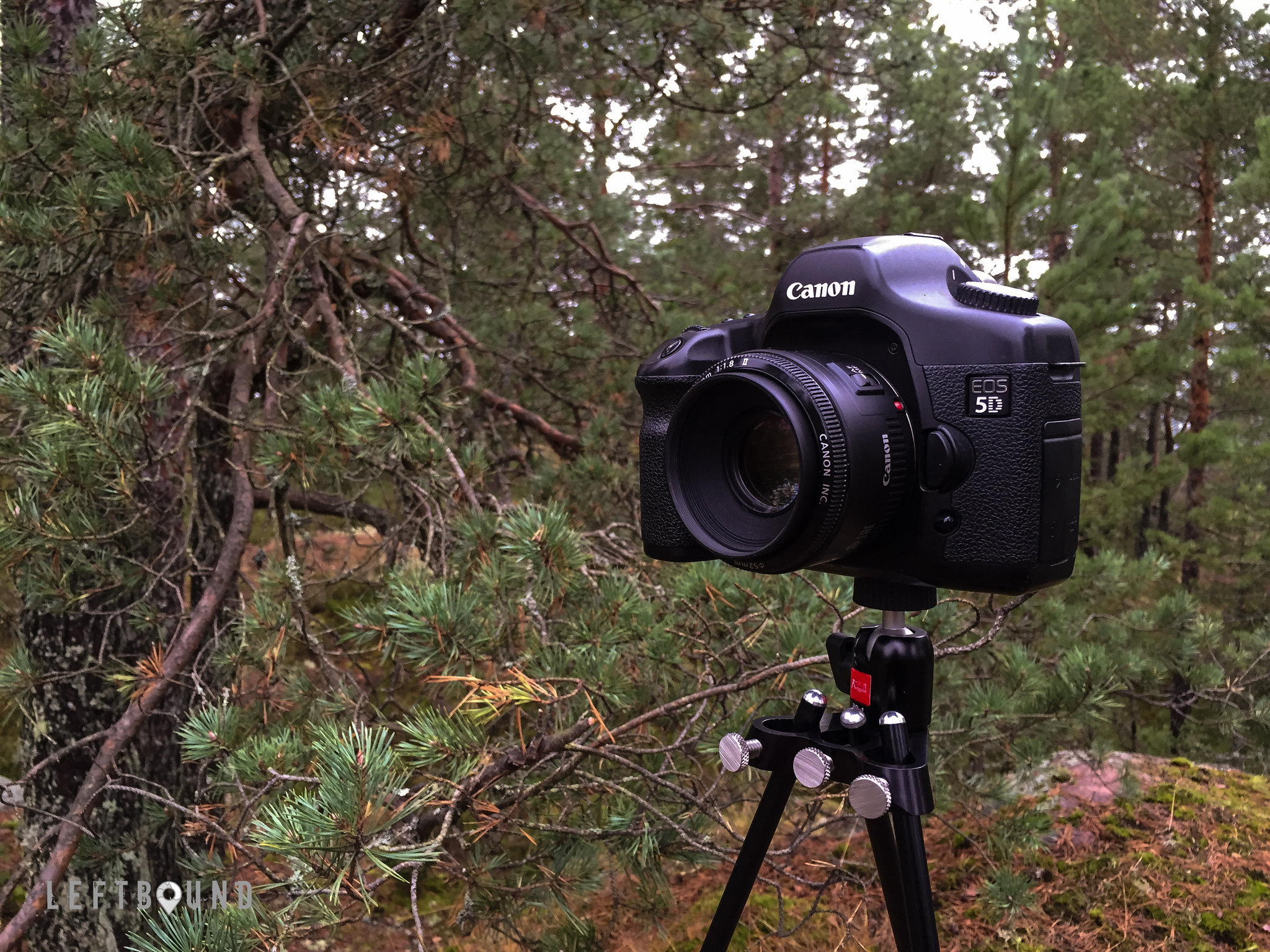 TrailPix aside, none of the above easily bring the camera higher up, or help take the camera further than an arms length, should you hold it in your hands. Years ago, around the time first GoPro’s came out, I had been for some time wanting something taller/longer to screw a camera onto. Considering a monopod, I was also browsing the limited range of trekking poles meant for photographers. I quickly ditched the idea of a dedicated monopod as it would just have been another thing to carry. And having a perfectly good set of poles for different uses, it seemed wasteful to get another pair just to attach a camera to. Why not simply add a threaded bolt to an existing pole and be done with it? 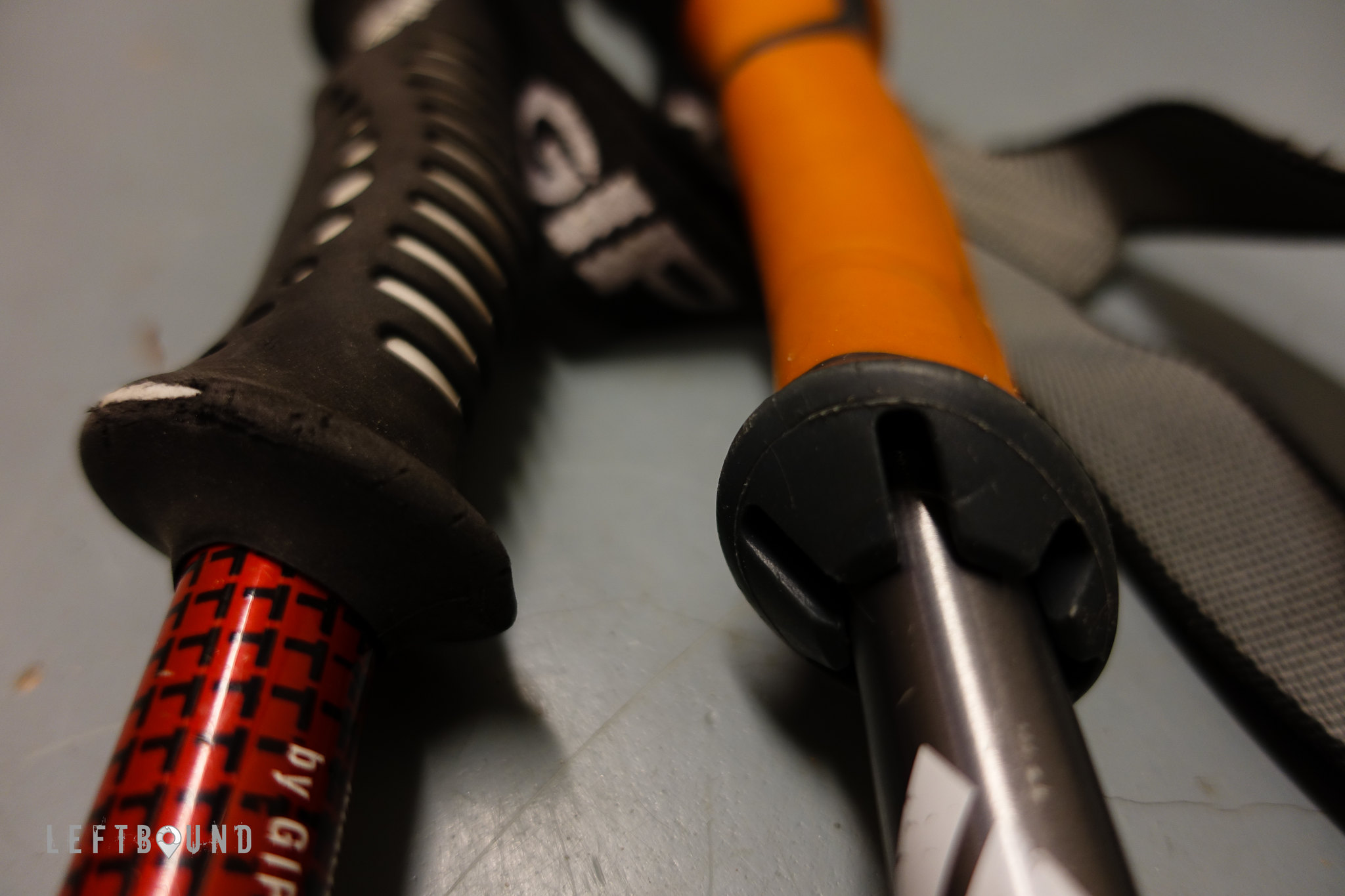 From idea to action, a visit to the local nuts and bolts specialty store (as the needed ¼-20 UNC threaded screws are not standard items in a typical hardware store in Finland) soon had me pulling off the handle on my Gibron Sherpa II telescopic pole. A pre-drilled hole through the top of the handle helped to screw in the threaded bolt from the inside of the handle, fixed in place with a knob of hot glue. Threaded through just the right amount to not bottom out on the camera, it worked perfectly. 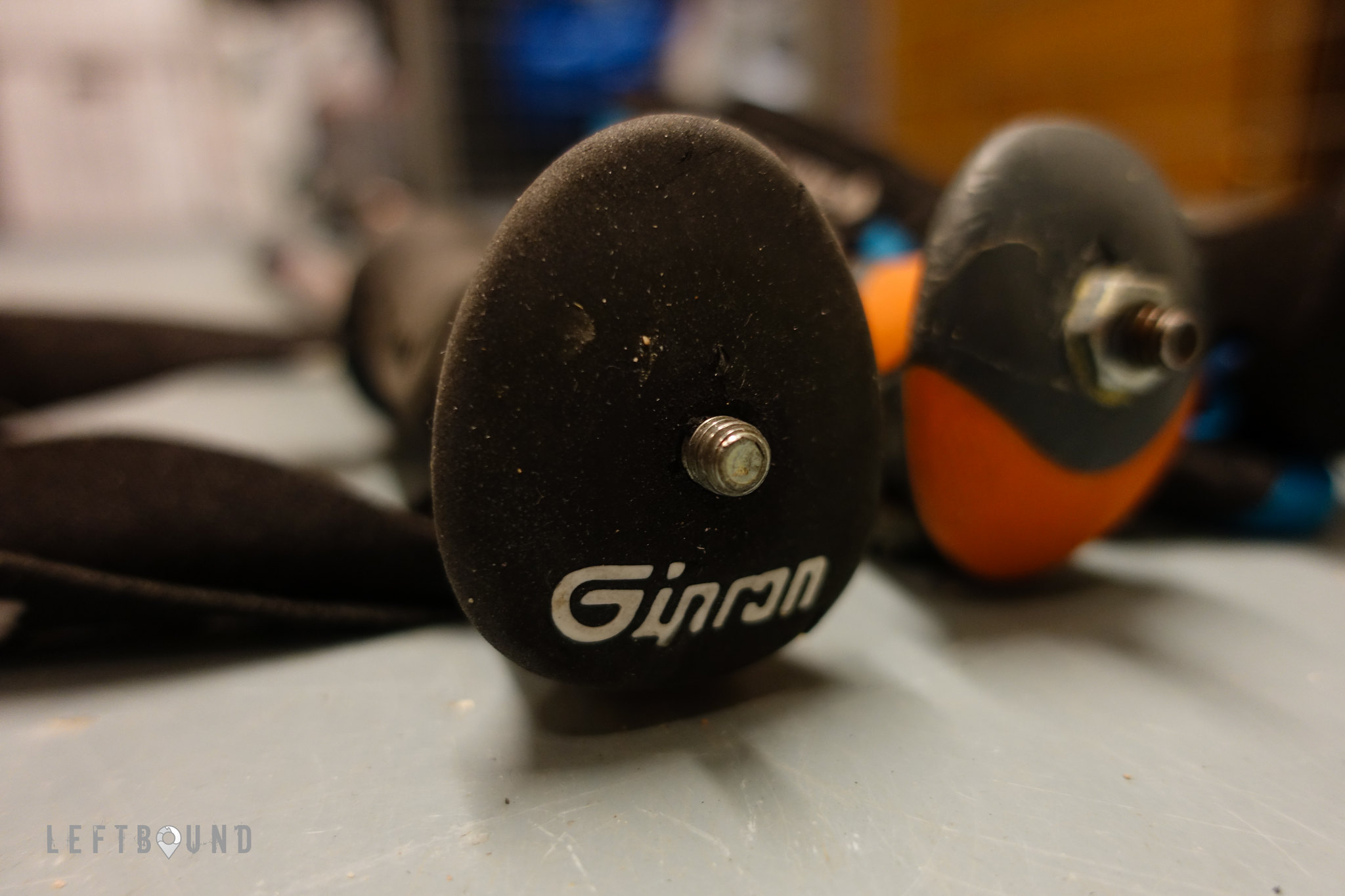 For example the below video was shot using this pole and a GoPro, strapped on the bow, extending a meter or so outside of the canoe.

As the Sherpa’s were my skiing poles, I’ve used them a lot as a monopod for family and group photos in the winter. Sticking a pole into firm snow, with a small(ish) camera threaded in, is solid enough to trust on, unless there’s hard wind. In those cases I’ve typically piled some snow around it, or pushed it in deeper, sometimes removing the basket. With the GoPro’s coming into play, threading one at the end of the pole has been a fun way to shoot one another skiing down the slopes, being able to reach out close enough for interesting angles. And of course it works like charm for including yourself, but also more of the surroundings, in the picture or a video reportage, despite not having an ultra wide angle lens. 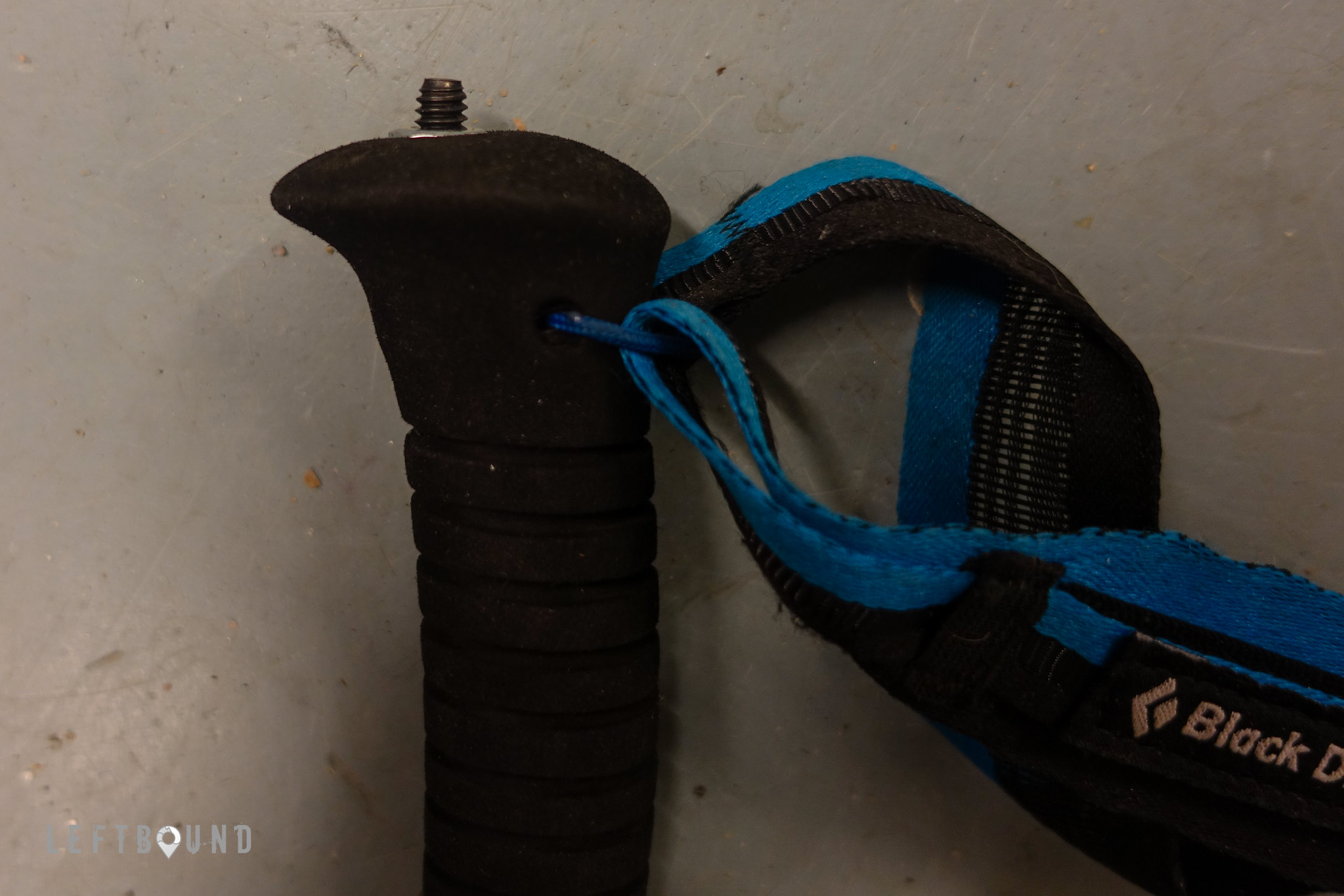 I’ve since then done a similar work on two other pairs of poles I regularly use, both from Black Diamond. Traverse poles, great poles for ski touring by the way, were done the same way as the Gibron, first removing the handle by heating it - use hot water or a blow dryer. The strap comes off by pushing out a pin that locks it down, and it needs to be removed for drilling and threading in the bolt. It’s a tight fit, but worked out fine, and once the bolt is securely in place, the strap can be re-attached without a fuzz. I opted to thread a nut on top, slightly recessed, which again was secured with a drop of hot glue. 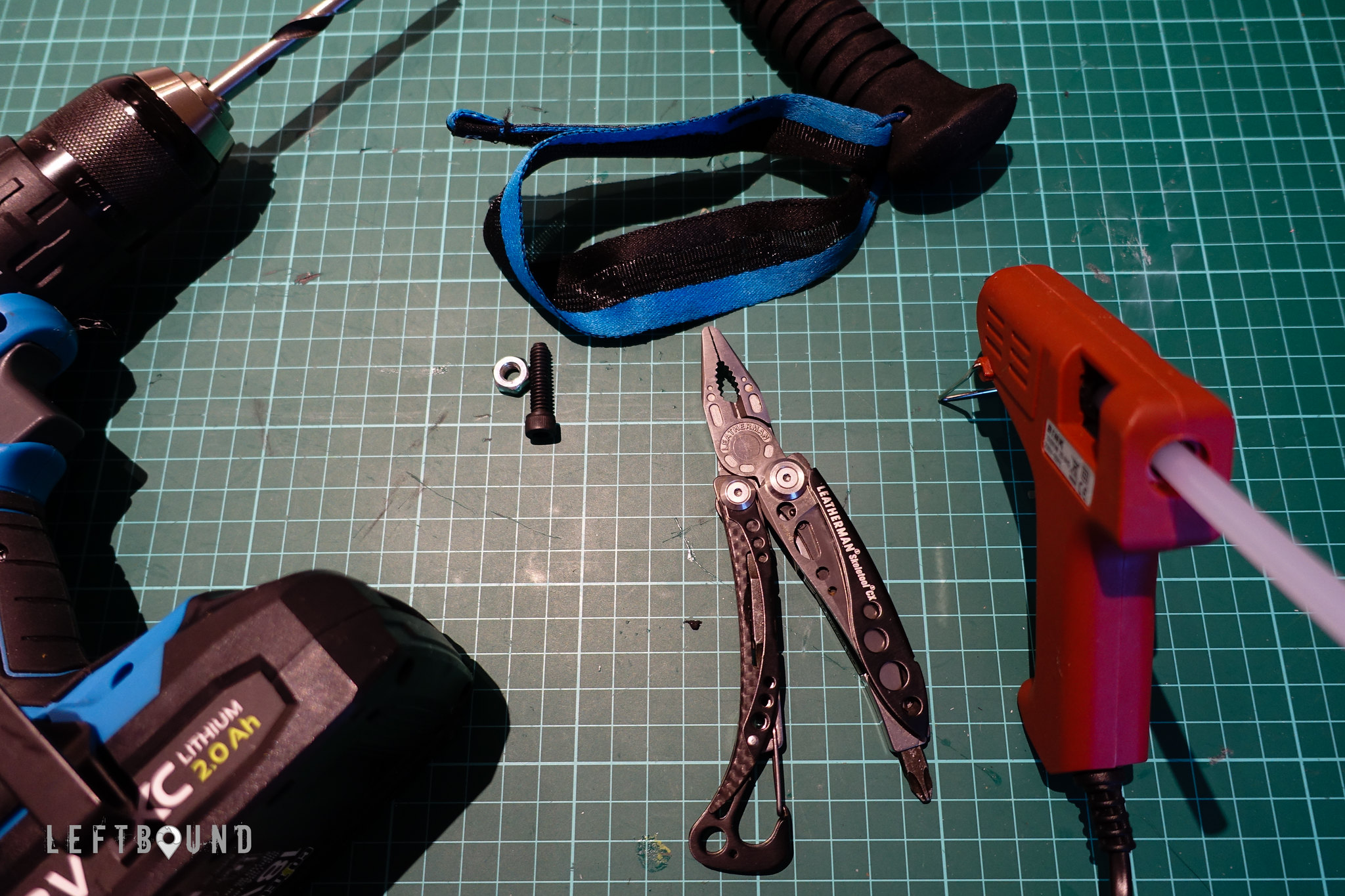 Latest modification was done on a pair of Distance Carbon FLZ Trekking Poles I had gotten for my trip to Iceland, requiring a slightly different approach. I could not get the handles off from these, most likely since, made of EVA foam, they appear to be glued in. Being ultralight poles, the wrist straps are not bolted in, but are held by a string of nylon running though the handle, past the midpoint. As I couldn’t remove it, and didn’t want to accidentally cut it, I had to place the bolt way up front, and not being able to remove the handle and thread it in from below, the bolt had to go in head first from the top. Being made of soft foam, I just pre-drilled a large enough hole into the soft handle to squeece the bolt in. After dry testing, I pushed hot glue into the hole, and in went the bolt, EVA stretching out as needed for a snug fit. 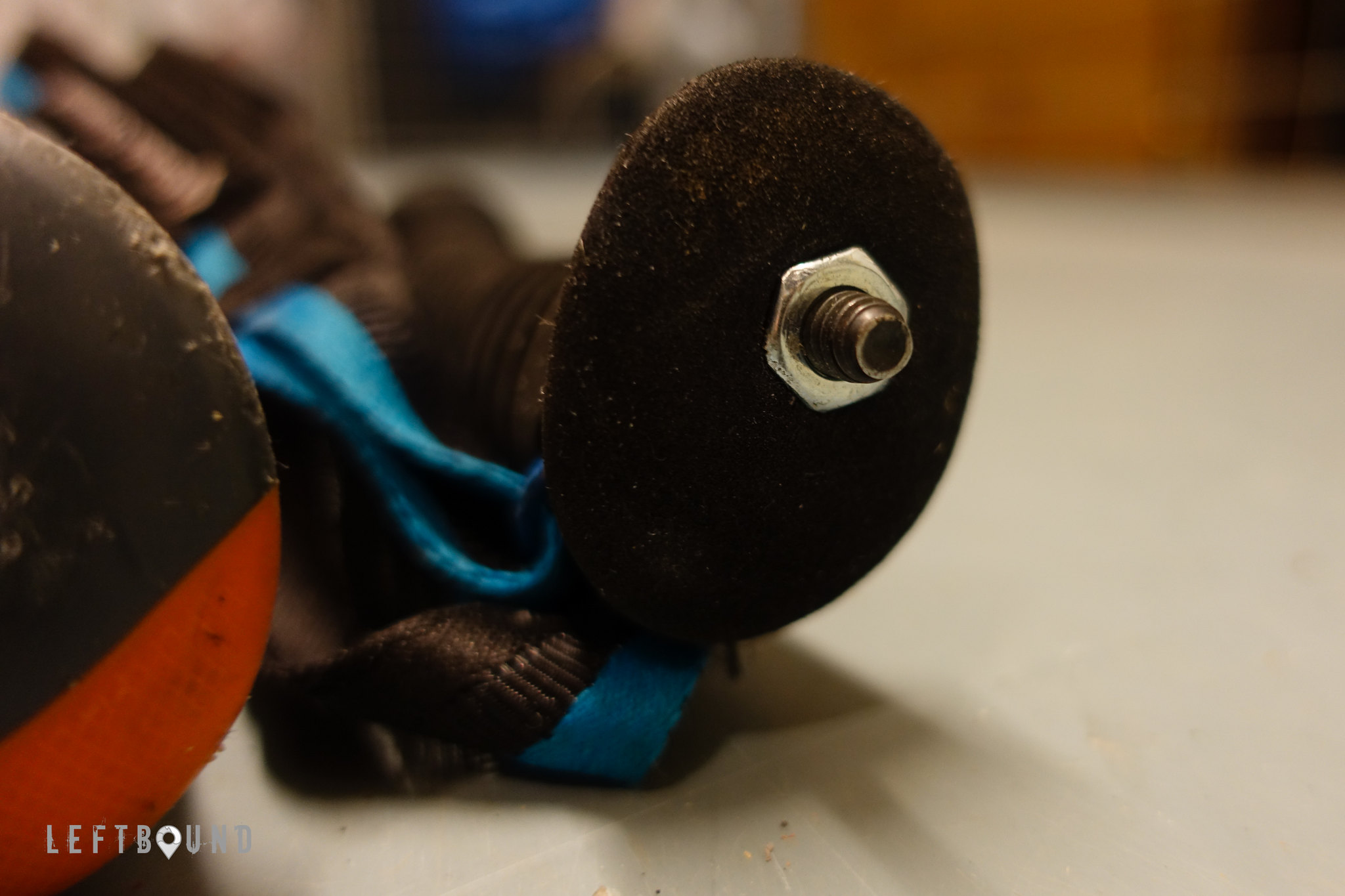 As you can see in the photo, I used a nut here as well, mainly due to the softness of the handle - this way, and with the hot glue filling, the assembly was secure and solid, not giving in at all. Used since last autumn, also this pole has worked well as a make-do monopod, and with my new pyramid tent, the pair will get out even more in the future. Quite a versatile piece of kit they have turned out to be - from trekking poles to amonopod to an adjustable center pole! 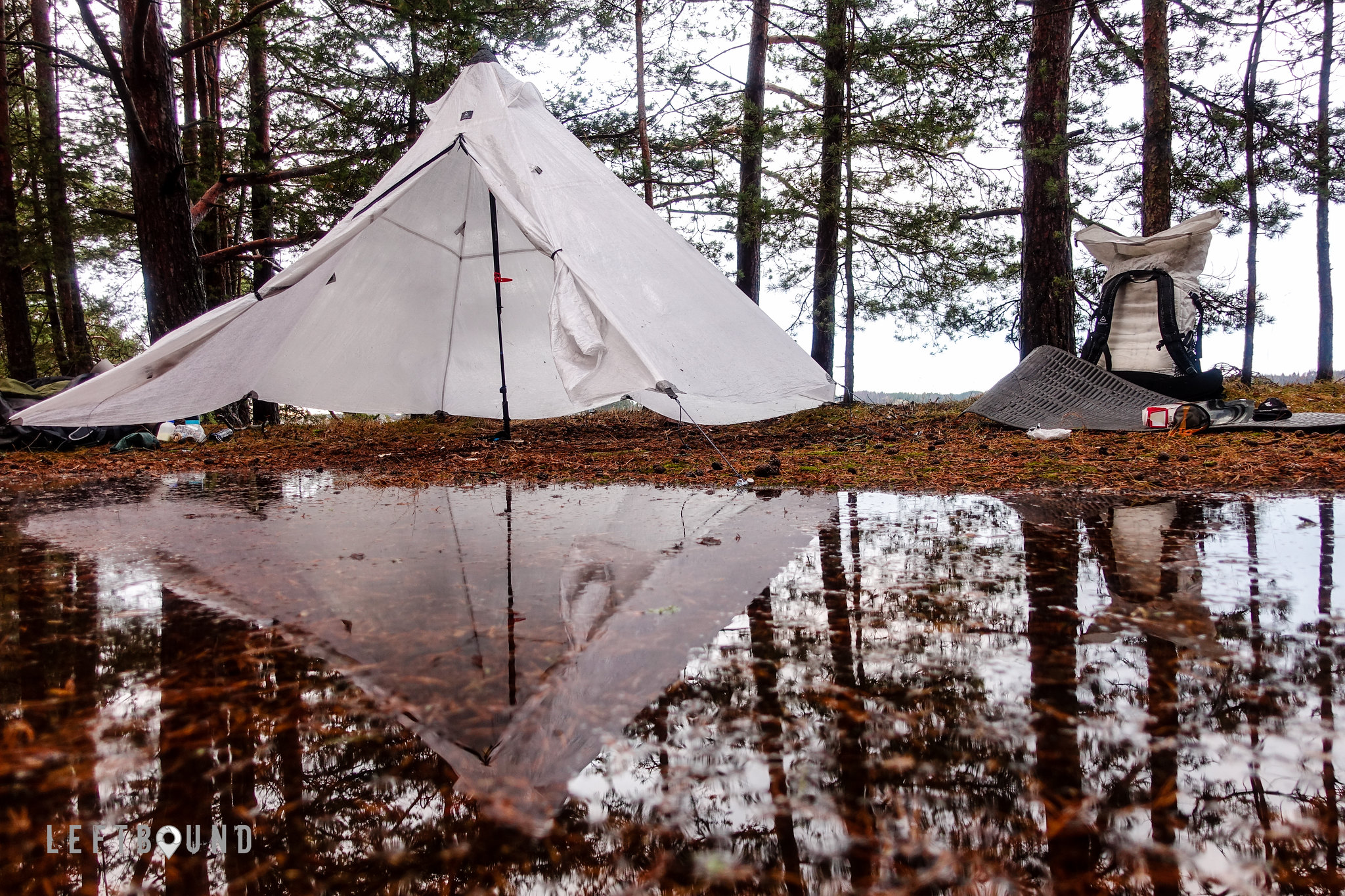 I’ve mentioned GoPro, which can easily be connected to the pole with the Tripod Mount accessory, but similarly you can use many other accessories to hook up whatever recording device you need, including your mobile phone. My iPhone 6 never leaves the protective Catalyst Case, and I’ve got a Multi-Sport Mount to lock it down securely to any of my monopod poles. 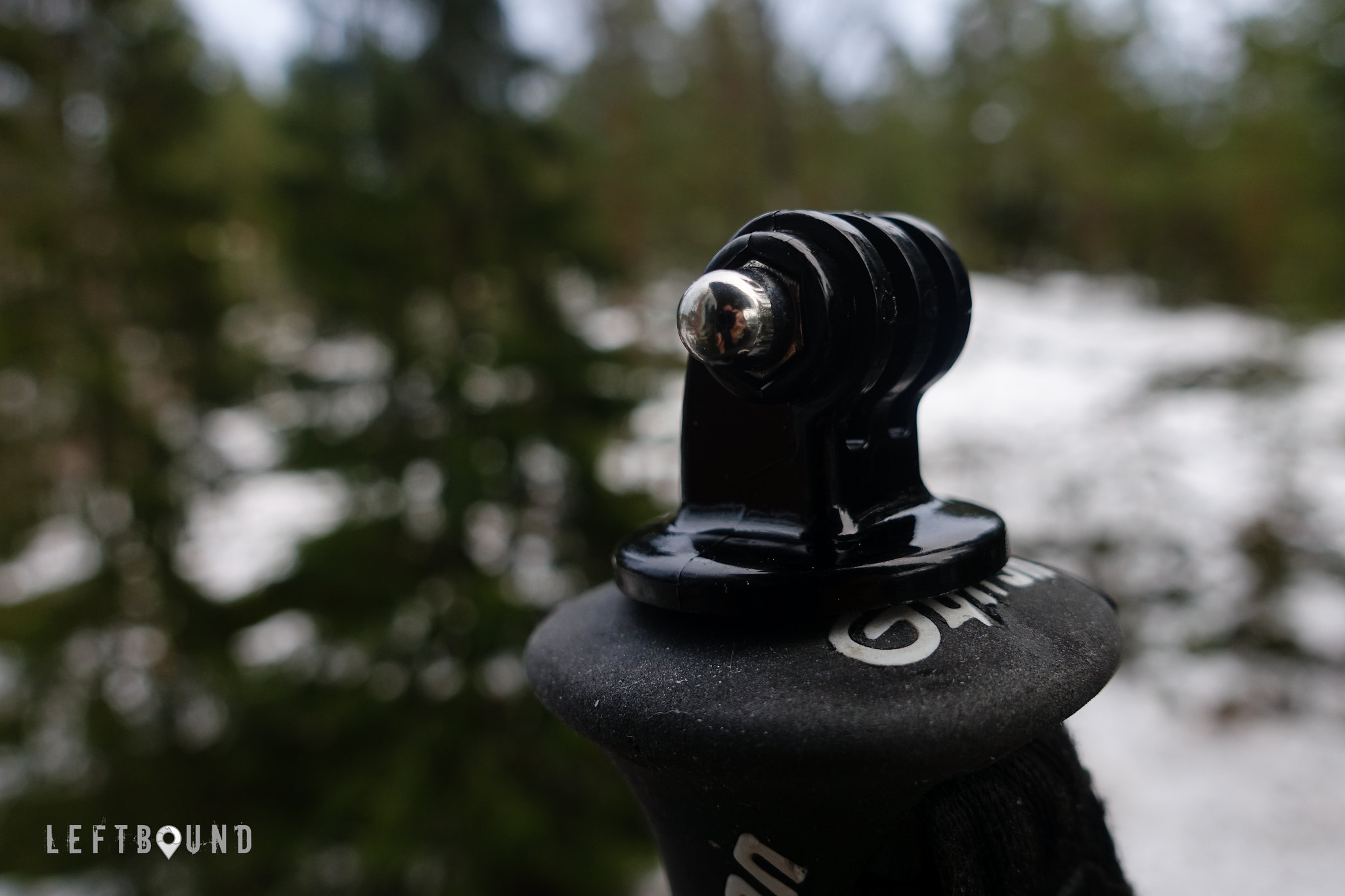 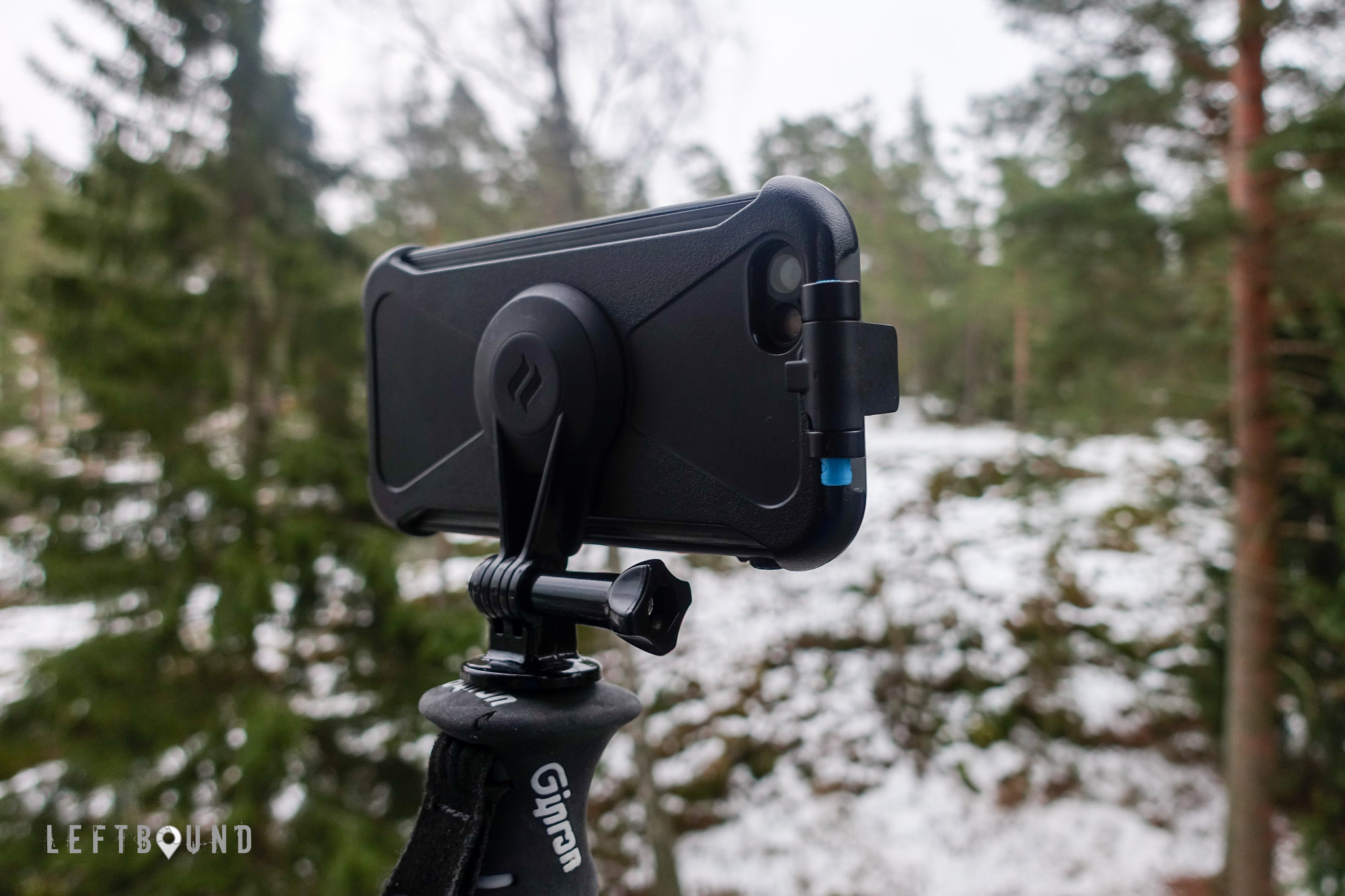 Needless to say, these have been extremely useful modifications for me, and relatively simple to do, I can recommend them to anyone. If you already have a good pair of poles, I see no reason to invest into a new pair just to get the tripod mount. Not having to unscrew anything is a big plus in my books, as opposed to removable caps and whatnot seen on some of the dedicated products, essentially offering the same functionality in a bit more polished, though maybe over-engineered, package. 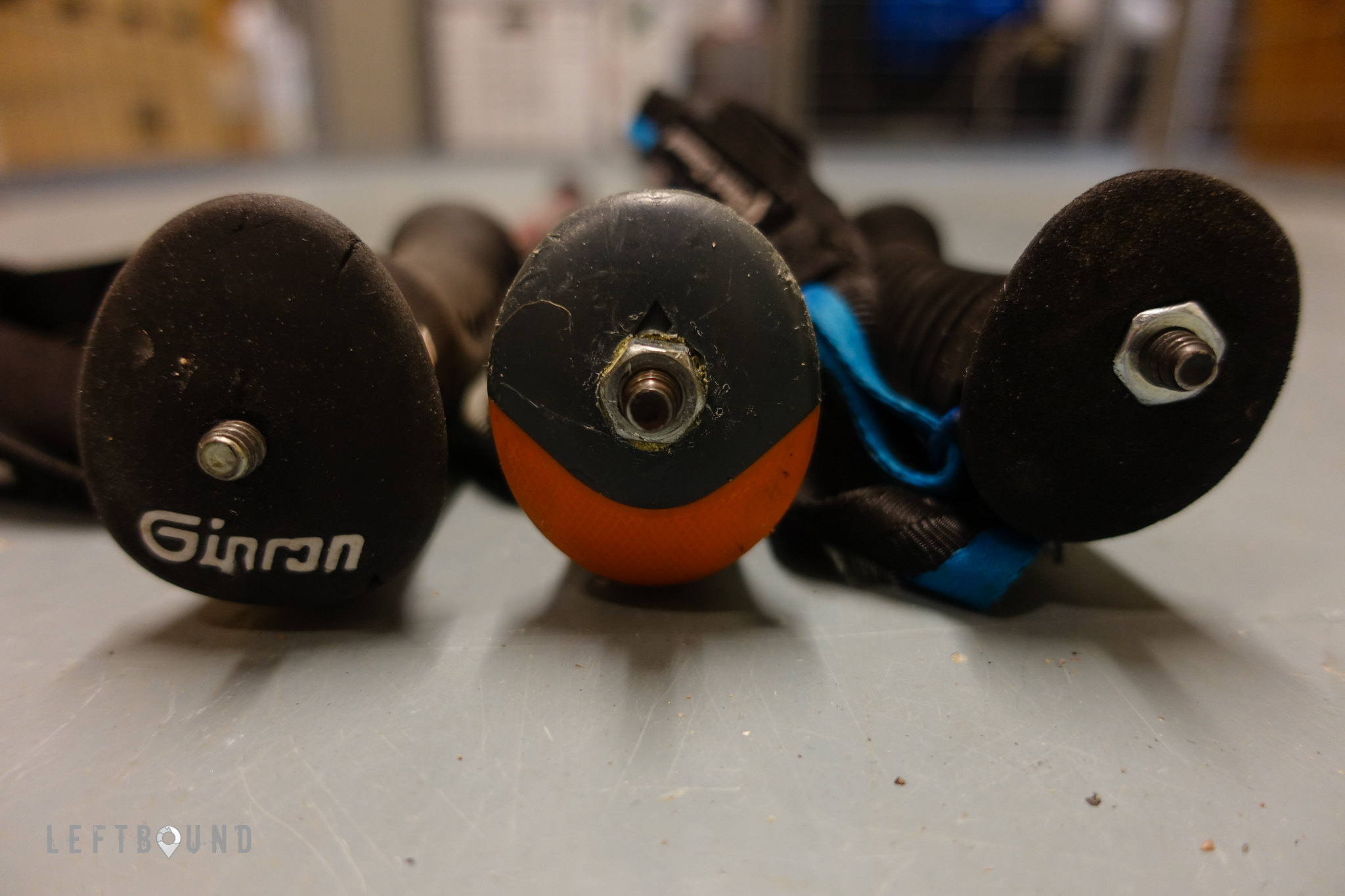